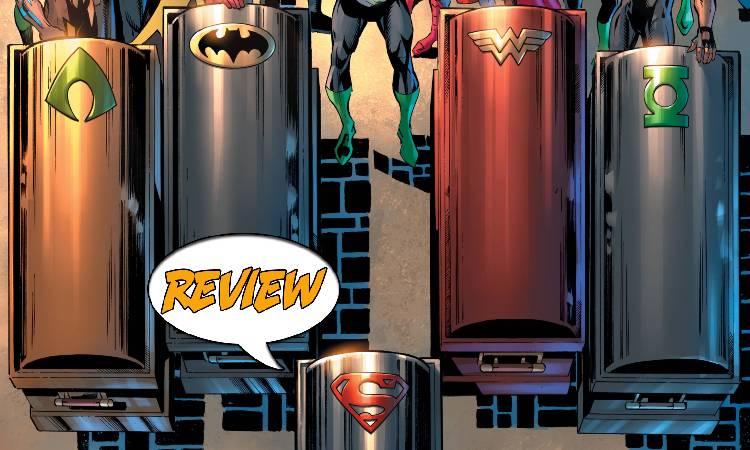 A Dark Army arises, and the League joins forces with Justice League Incarnate to stave off the end. But even they cannot stop what is coming… Your Major Spoilers review of Justice League #75 from DC Comics awaits!

Previously in Justice League: A new Dark Army made up of the DCU’s greatest villains has formed on the edges of the Multiverse. The DCU’s best and most powerful heroes are pulled together in an epic war to push the darkness back! But will even the heroes of the Justice League be enough to turn the tide?

Just looking at that cover, I’m going with “No.”

AN ARMY OF WHO?

In the skies above Kahndaq, Black Adam is surprised when he is suddenly teleported away to the House of Heroes. Across the galaxy, other members of the League disappear, including Zatanna, Black Canary, Wonder Woman, Batman, and others. (Oddly, Naomi isn’t taken, despite being an active member of the team, as far as I can tell.) President Superman greets them all, explaining what has happened recently, including the loss of Barry Allen at the end of Infinite Frontier last fall, the death of Flashpoint Batman, and Darkseid’s possession by The Great Darkness. Both teams are taken by surprise when the House of Heroes is torn apart by the evil force. Doctor Multiverse makes a desperate bid for freedom, teleporting them to the ruins of the Earth-1 Multiverse, where they are faced with The Dark Army! Ares, the god of war! Doomsday, the murderer of Superman! Eclipso, the Spectre’s dark counterpart! The Empty Hand, architect of Multiversity! Nekron, god of death! Neron, god of evil! The Upside-Down Man, something-something Dark Multiverse! Most damning of all, Darkseid of Apokalips, and The Spectre, instrument of God’s vengeance!

THE DARK CRISIS IS UPON US

So, here’s the thing about Justice League #75: It’s a pretty solid issue of comics. DC has been building up “The Death of the Justice League” for a couple of months now, and the idea of a team made of the Big Bads of previous universal Crises feels like overkill, but I still enjoyed the read. Green Arrow jumping into the teleporter as Black Canary was teleported away is a cute moment, balanced out by sheer horror as his neck is shattered by Doomsday, on-panel. Seeing Black Adam’s confidence whittled away as he faces the Dark Army is truly impressive, leading to a chilling sequence wherein Pariah (Did I mention Pariah? This is a story about Pariah.) completely no-sells his most powerful punches and his shocking end works. I’m a little bothered that the cover and solicitation copy give us five caskets when no less than FIFTEEN heroes die in this issue, and it doesn’t entirely avoid the overkill problem, but on the whole, it’s a good issue. Sandoval and Taragona’s art has to straddle a fine line, selling the seriousness of this issue’s combat sequences and the requisite demises while coming face-to-face with an audience who aren’t going to take them seriously.

When you break it down, Justice League #75 has big hurdles to overcome, and while it doesn’t quite pull everything together, it’s got strong art and a complex story that has been simmering for a while, all coming together to end this volume of Justice League with a bang and 3.5 out of 5 stars overall. If you can get past the price point ($6.99 for 36 pages) and the fact that it is essentially a zero issue for the upcoming Dark Crisis series, you can find some real enjoyment in these pages, even though they killed Zatanna, Captain Carrot, and Mary Marvel.

The solicitations have been pushing this one hard, but even knowing how it ends, Williamson and company build the tension of the story well.

If only this wasn't the last issue AND the opening salvo of another massive crossover.