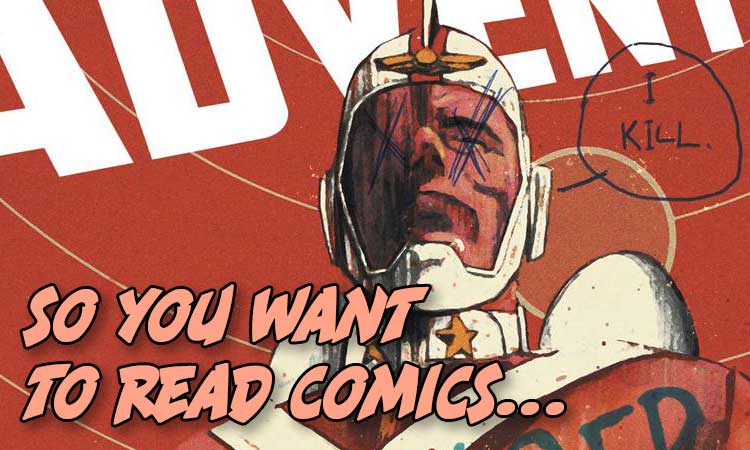 So You Want to Read Comics: Retrofuturism Edition

We’re looking for a bright and shiny future with this week’s “So You Want To Read Comics”.  This is our weekly feature where we take a look at a single topic or genre, then give you two comic book recommendations, perfect for new readers, based on that topic or genre.  This week we’re taking a look at Retrofuturism.

In the most basic sense, Retrofuturism is the practice of envisioning a future from various places in the past that was able to come about without any other influences. . So, for example, in the 50s, based on the current aesthetics and beliefs about society, depictions of the future were often sleek, bright, and colorful.  So if a creator today would emulate that style, it would be retrofuturism.  Retrofuturism is sometimes employed as a sort of shorthand to suggest that the history of the world we’re seeing has deviated at someplace.  Other times it’s designed to depict tensions between what has been and what will be.  It’s a fairly common technique that has been utilized in films like The Incredibles, and video games like Fallout or Bioshock.  And, of course it’s appeared in comics.

It’s also important to note that the term Retrofuturism is a fairly broad term that can include sub genres like steampunk and cyberpunk. But for the purpose of this article we’re going to focus on a specific look that’ll become apparent with the recommendations.

Adam Strange is a character with decades of history going all the way back to the 50s.  During his early years his stories often acted as a peek into a possible future envisioned by the creator.  In Strange Adventures, he’s reached the end of his career and is ready to enjoy retirement, when suddenly ghosts and demons from his past start appearing.  This series is a great encapsulation of one of the deeper aspects of retrofuturism, which is exploring the unsavory moments of history that occurred while everyone was looking towards the future.  This series does a great job of showing that all of the so-called “necessary evils” that are committed in the name of a bright, shiny future actually have a reverse effect.  Now, this might not seem like a great place for a new reader to jump on because it deals so much with a character’s history, but it’s pretty good about laying out what a reader needs to know.

Written by Dean Motter, who has written many books in this genre, this series was published originally in the late 90s and is has one of those types of stories where the focus is the city itself, and all the little vignettes within are simply extensions of that.  Terminal City is a retrofuturistic story that essentially asks the question, “We got the future we hoped for, now what?”.  Many of the stories involve the decline of the city, due to a society that grew content with what they had achieved and no longer strived for anything more, instead letting the natural decay, both physically and morally, take hold.  WHile there are some elements of superheroism in this, it’s much more akin to something like Dick Tracy or even The Shadow, except in a much more advanced setting, with more modern looking art. There has never been any more Terminal City than what is in this collection, so it’s a great place to turn to if you’re in the mood to read something to its conclusion.

What are some of your favorite Retrofuturism stories?  What did you think of these recommendations?  Let us know in the comments section below.