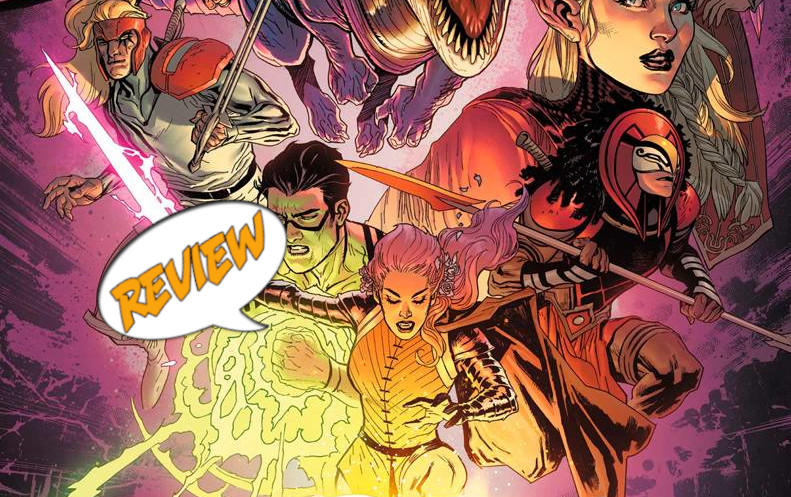 Merlyn and King Arthur have taken over the Starlight Citadel and are hunting mutants in Otherworld! Can Betsy Braddock return Saturnyne to the throne? Find out in Knights of X #1 by Marvel Comics!

Previously in Knight of X: Usurpers Merlyn and King Arthur have taken over the Starlight Citadel and renamed it the Lunatic Citadel. They now send their furies the size of Sentinels out to raze villages and hunt down the “witchbreed.” The witchbreed is another name for mutants. Betsy Braddock is cut off from Krakoa and is trying to do her best to save her people.

Knights of X #1 starts with a rescue of a witchbreed by the Captain Britain Corps and provides some much-needed exposition. Saturnyne and Captain Britain have taken sanctuary at the Kingdom of Roma. This place is run by the daughter of Arthur and a friend of mutants. While Saturnyne is panicking due to her lack of power, Betsy turns to Roma for help, and Roma offers her a spell to start a quest. Roma can’t bring the armies of Krakoa to Otherworld, but Betsy can pick people to help her. She prepares a team with mutants like Rictor, Shatterstar, Gambit, Rachel Summers, and Bei the Blood Moon. Betsy even tries (and fails) to resurrect Mordred, who is believed to be a witchbreed. She also recruits Jubilee and Shogo.

The new team returns to Otherworld, but Jubilee can’t make the trip because she isn’t meant for the quest. This means that Betsy’s team has three holes. She recruits Kylun and Megan Braddock. And is even surprised to find a young Mordred to round out her team.

I find it funny that whenever you pick up an X-Men title, the first issue is just building the team. And lately, they have followed the same mold. A person needs help and assembles a group of like-minded mutants to join. Knights of X #1 follows that mold to a tee and does so well. I understand the threat of Merlyn and the need for a response. But I do admit that I lost engagement because I have seen this formula many times before. I tried to gravitate to some of the character drama, but the cast was too large to introduce party tension. The most interesting character was Bei the Blood Moon, who seemed to be the most resistant to join the team because she wanted to be with her love Douglass.

All that to say, I think this issue is designed to create a foundation for the next issue. And perhaps issue #2 is where the story is actually going to start.

Knights of X #1 looks like a really engaging plotline, but it is difficult to know based on what information we got. Regardless, the art style is solid, and the writing nicely sets up the whole series. I am optimistic that we will get a good series. 3.5 out of 5 stars for Knights of X #1.