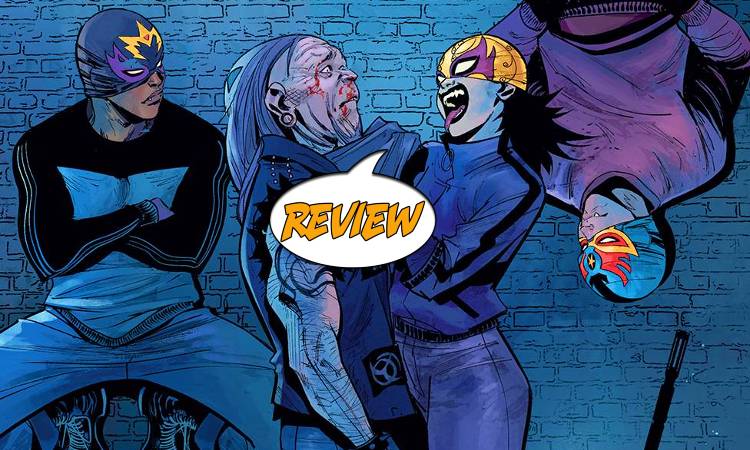 Danny Garcia is a vampire. But now he wants to be a superhero, and he doesn’t wanna do it alone! Your Major Spoilers review of Night Club #2 from Image Comics awaits!

Previously in Night Club: Danny Garcia is a High School student who was bitten by a vampire, but he isn’t going to mope around and be some annoying goth. He’s going to be a superhero, and he’s bitten his best friends too so they can form a team.

There’s no way this is going to go well.

The first issue of Night Club ended with Danny revealing his superpowers to his friends Sam and Amy… which causes them both to panic and run. Danny catches Sam, blatantly using his vampiric powers in full view of the public, then dragging Sam to a rooftop. Once they’ve cleared up the misunderstanding, Danny explains the story of his vampirization last time, revealing for the first time his desire to become a real-life superhero. Sam flatly refuses, but Amy agrees to be bitten out of a combination of boredom and the desire for online viral notoriety. When she awakens, Danny reveals that Sam gave in a few minutes after she was exsanguinated (a truly ham-fisted bit of storytelling) and that they’re all gonna be heroes together. He’s already ordered their luchador masks! But before they get into any heroic stuff, there’s the matter of a bully to be humiliated.

A REAL “HOW DO YOU DO, FELLOW KIDS?” KIND OF FEELING

The first thing that I will tell you about this issue is that the reveal that Danny wants to play superhero should have been a shocking reveal. If they had ended last issue with that admission, rather than trumpeting it as the series’ hook, it would have made both issues read more smoothly. Of course, it’s quite clear that reading smoothly is of no concern to Mark Millar. This is about proof of concept, so that when they make the inevitable streaming miniseries, they’ve established it as a property. There’s literally no characterization for Danny, Sam, and Amy in this issue other than interchangeable millennial shibboleths, seen through the eyes of a fifty-three-year-old writer. They’re disaffected, worried about Internet stardom, and seemingly unable to hold a coherent thought for more than a minute or so.  It’s honestly a shame, as Juanan Ramirez is really killing the visuals. The sequences of our protagonists testing their powers in traffic is dynamic and expressive, leading to the ominous reveal that our heroes can’t cross running water, and thus may be trapped in town. Even the leftover ’80s movie sequence pitting Sam against the delinquent who has been tormenting him is well-drawn, with special attention to a moment involving a bloody basketball.

BOTTOM LINE: NOT GETTING ANY BETTER

The shame of Night Club #2 is seeing such talented storytelling saddled with the muted color palette designed to make it clear how the story will look in live-action, but the real shame comes in that fact that much of the script and ALL of the dialogue feels like shorthand, leaving the issue with a disappointed 2.5 out of 5 stars overall. If only this felt like the Mark Millar of old, this story could be the next Wanted or The Walking Dead, but instead, it’s stilted and forgettable.

Shoulda stuck to my guns.