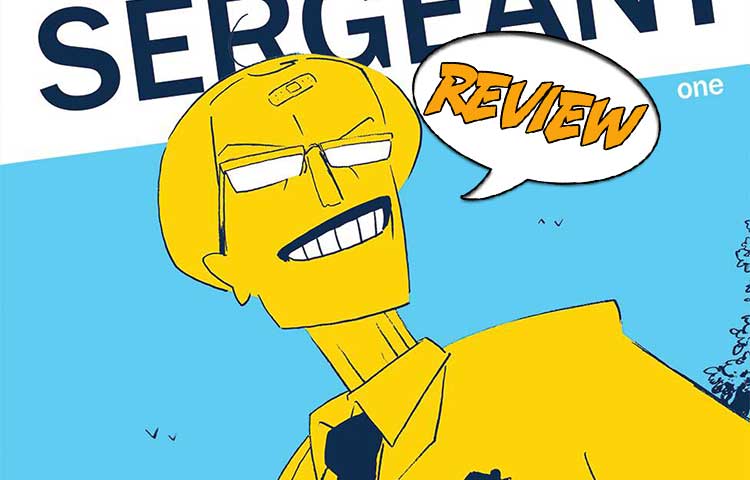 James Sargent might be able to escape death, but retirement is another story.  Your Major Spoilers review of Immortal Sergeant #1 from Image Comics, awaits!

Previously in Immortal Sergeant: James Sargent is one of the last old grizzled cops in the NYPD, but whether he wants it or not, retirement is looming.

Immortal Sergeant #1 opens up with James Sargent pulling out his commemorative retirement pocket watch and then blasting it away with his very large revolver.  Things then flashback a week to the police station where James’ fellow detectives are already clearing out his office.  They all pontificate on being a cop and what retirement will be like for a while before James has enough and bails to go saddle up to a bar.  He talks with the bartender who informs him of another cop who retired not long beforehand, who was now dead.  James takes off and finds himself at another bar.  After securing the last drink of the night he encounters a group of teens messing with his car.  He eventually makes it home where he listens to his messages and isn’t thrilled.

A SLOW BURN, TO A FAULT

Immortal Sergeant #1 It doesn’t take long to realize that Joe Kelly is in no rush when it comes to telling the story of James Sargent.  Much of this first issue comes off as more of a character study on the protagonist rather than being an essential part of the plot.  In fact, by the end of this issue, it feels more like an extended opening sequence before a late title card than anything else.  What’s crazy about it all though, is that it mostly works.  This issue relies heavily on its main character and when it comes to establishing who that is, this is a well-done comic.  This is a grizzled old man and there’s no ifs, ands, or buts about that, and he almost revels in his lack of understanding with younger people or modern sensibilities.  With all that being said though, there’s no getting away from the fact that this isn’t the first burned-out old man railing against the coming tide of age that we’ve seen, nor is this a particularly unique take on that.  Also, there’s the nagging sense that this is one of those “writing for the trade” situations, which is fine, but makes it hard to justify picking up this issue on its own.  But, if the little blurb in the back of the issue can be trusted, there are some interesting things on the way and some decent foreshadowing in this issue about those upcoming plotlines.

NOT WHAT I EXPECTED

Joe Kelly and Ken Niimura have collaborated before, most famously in the series I Kill Giants.  So, when I sat down to read this I was expecting something that looked similar, my expectation was not correct.  Now, it’s easy to tell that this is a Ken Niimura drawn book, but it’s so stripped down that at times it comes off as a sketch or reference material for a more artistically fleshed-out book.  There are some neat things going on here though, particularly with the depiction of anyone younger than James.  While none of the characters are well-detailed visually, all the young characters look nearly devoid of any defining characteristics.  With the dialog being so sparse in this, it’s touches like this that do most of the work in establishing the tension James has with time.  But, this is definitely not going to be everyone’s cup of tea and I don’t think anyone could be faulted for not caring for the look of this book.

Bottom Line: Not Bad, But Maybe Wait It Out On This One

Immortal Sergeant #1 is a great character-driven piece of fiction.  It throws a lot of effort into establishing just one character and that effort pays off.  Unfortunately, there’s nothing else here to really get into, with the only promise that there’s more plot coming, being found in the blurb on the back cover.  This just feels like one of those comics that’s better with the rest of the series.  3 out of 5 stars.

Immortal Sergeant #1 is full of promise for the series as a whole, but it doesn’t do much other than introduce the main character, on its own. It’s hard to recommend someone buy this, when it’s basically a cold open.