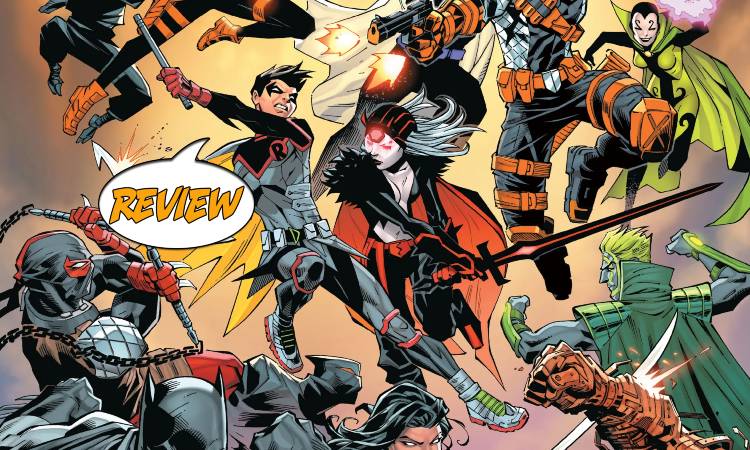 The identity of the false Deathstroke is revealed, while the Shadow War heats up for real. Your Major Spoilers review of Robin #14 from DC Comics awaits!

Previously in Robin: FIGHT! Batman Inc. versus the League of Shadows versus the Secret Society! Deathstroke versus Talia… and only one will walk away from the fight alive! Robin knows the truth behind Ra’s al Ghul’s death and races to stop the Shadow War!

DEATHSTROKE VS. TALIA: TO THE DEATH!*

We start in the middle of a huge fight as the forces of Batman Inc. (Clownhunter, El Gaucho, The Wingman, Dark Ranger and their new leader Ghost-Maker) interrupt a war between Deathstroke Inc. and Talia’s League of Assassins. Deathstroke’s team includes the usual suspects of these kinds of stories, but also has Lady Vic, the Body Doubles, Prometheus, and other characters who just scream “big ol’ ’90’s Bat-event.”  Batman orders Robin to stay out of things, but Damian literally leaps out of the plane to stay in play in the hopes of bringing his mom to her senses. For her part, Talia is busy fighting Slade Wilson in a one-on-one grudge match, as she thinks that he killed her father, while he knows she killed his “son.” Robin’s hands are briefly full with Rose Wilson, allowing their parents to finish their trial by combat in murderous fashion. That’s when the fake Deathstroke makes his appearance again, only to reveal himself as…

…Geo-Force, the King of Markovia! It’s the kind of reveal that would have been great fifteen years ago but given that Brion Markov has appeared only a double-handful of times since 2015 and was MIA for most of the New 52 revamp. There are something like three dozen characters in this story who barely get so much as a line of dialogue, but Ghost-Maker’s frenemy Angel-Breaker is one of them, which is also a problem. She taunts him in a metatextual fashion that she is “his Catwoman,” a moment which feels gratingly out of place in the midst of the battle. I’m fine with the victor in the Talia/Slade murder-war, but the execution of the sequence is awkward in both plotting and art. Indeed, this whole issue features Cruz art that feels incredibly retro, like an issue of X-Factor from the last century. A sequence featuring the underserved heroes Batman Inc. leaping into action together feels stiff and overly posed, like a cover concept gone wrong, while the full-page reveal of Deathstroke features him in full-on Rob Liefeldian mid-shout grimace. While I’ve enjoyed Williamson’s take on Damian Wayne, this issue falls back on some grim character bits to drive a wedge between father and son that never quite feels authentic.

Though I’ve only been casually following the Shadow War arc, I saw the big twist of Robin #14 coming as clearly as if I’d read the book before, and the art only adds to the deja vu of an issue that feels like a lost chapter of a Bat-crossover like Contagion or Bruce Wayne, Murderer, earning 2 out of 5 stars overall. There’s nothing wrong with a dramatic moment that is telegraphed sufficiently for the audience to suss it all out, but this particular story hasn’t really been able to get into gear enough for me to get past that part and immerse me in the conflict.

Retrograde art, a reveal that could be seen a mile away and a nihilistic tone that feels straight out of 1996 combine for a disappointing issue.