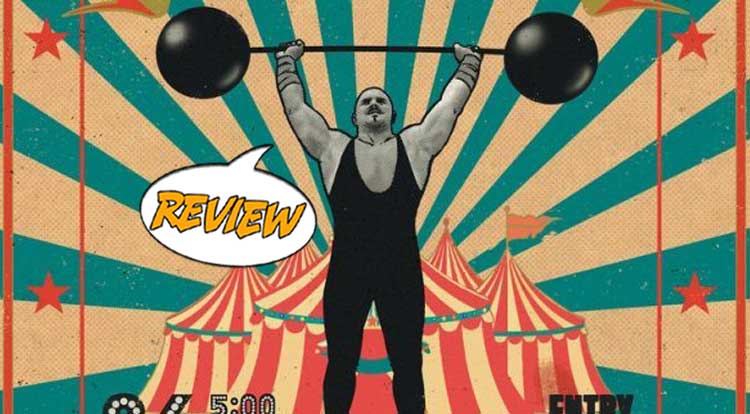 Who is The Kid? And why are she and Rorschach dead? Your Major Spoilers review of Rorschach #4 from DC Comics Black Label awaits! Previously in Rorschach: The detective following Rorschach’s trail turns his eyes toward the vigilante’s female companion. Who is behind that domino mask, and what led her to team up with an old comic book creator to try to assassinate a controversial presidential candidate? These are the threads the detective must unravel… and they lead him to a circus sideshow and the strong man she once convinced to kill for her.

Our story begins with a pack of crayons and an unseen speaker, discussing his favorite color. It becomes clear that someone is being interviewed about “The Kid”, whom you may remember from the puddle of blood in issue #1 of this series. His name is Muscles, the Man Mountain, and he was close friends with her before she went on her strange rampage. It’s a sweet story at first, of a young woman and a man of limited intellect, bonding during their life in the circus. But when one of the roadies begins drunkenly bragging about having beaten his wife to death, The Kid vows to shoot him, leading Muscles to kill him to save her. That’s when she realized: He’s Rorschach! Or, at least, in her mind, he is the incarnation of Rorschach’s soul, discorporated by Doctor Manhattan to save the day. And then, the murdering begins in earnest. “There are blue men who control time and there are squid invaders who kill millions with mind powers”, he reminds the detective interviewing him. “That’s just the world we live in.”

A STUDY IN MADNESS

Muscles’ story ended in a hail of bullets, albeit one he survived, and it’s a very chilling tale that he tells. The worst of all is when he hears that The Kid is dead, and begins laughing at the detective’s ignorance. Death, he explains, won’t stop her. It’s a chilling moment, showing how deeply ingrained his delusion was and giving us a little bit of a look into hers, and I find it enjoyable, mostly. It’s an incredibly grim story and, much like ‘Before Watchmen’, it misses the point that the heroes weren’t admirable people (although King admittedly makes that an in-universe delusion, rather than the bizarre takes of BW.) What carries this issue, though, is Fornes incredible detailed and realistic art, giving us one of the few post-Gibbons takes that actually feels like it could exist in the same universe as the original. It’s truly impressive stuff, especially the moments where we see Muscles as “Rorschach”, and it carries me past the parts of the story that are unapologetically grim, horrific or focused once more on the trauma of just plain living.

All in all, I liked Rorschach #4 a lot more than I expected to, as it captures an interesting voice (even if the story is just over-the-top grimdark), explains more about how we got to the bloodbath in the first issue and does it all with gorgeous artwork, earning 3.5 out of 5 stars overall. Even if you’re uncertain of the story (and I am, more than a little bit), you get sucked in and pulled along by the sheer beauty of the visuals, making for a good read.

It's way dark and grimmer even than the source material, and four issues in, I'm still not sure what this narrative is about, but darned if it's not half-bad.