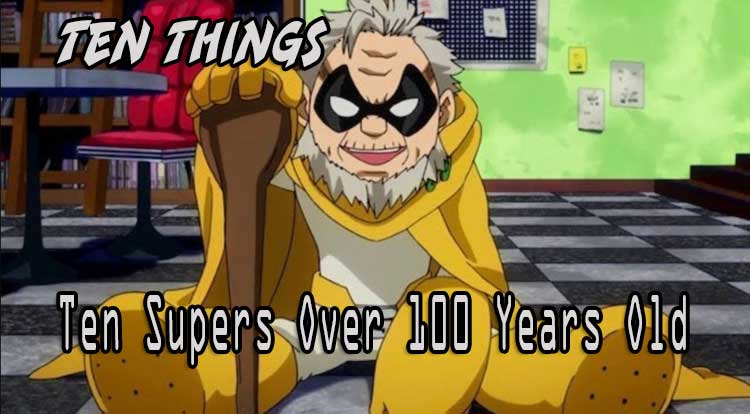 Capes and tights may be a young person’s game, but that doesn’t mean a few brave souls haven’t been hanging in there! Welcome to Ten Things: Ten Supers Over 100 Years Old! An eternal soldier in more wars than he can count, James Howlett (Logan to his friends) was canonically born in the early 1880s. A sickly young man, prone to allergies, he spent much of his childhood in bed before discovering his claws. A lifetime of brainwashing followed, and more than a few traumatic injuries that didn’t help with his retention of information, until the grizzled Canadian fell in with the X-Men and began exploring his past. Thank to his healing factor, he seems much younger than his 140+ years, but it should be noted that his current body is a clone that’s about a month old. Once a Victorian rogue, Dickie Swift was bonded with a strange dimension of semi-solid living darkness known as The Shadowlands, making him essentially immortal and giving him the power to command shadows. He found entertainment during the 1940s by fighting superheroes, but was never really as evil as he might have you believe. In recent years, he has settled in Opal City, becoming a friend and adviser to Jack Knight, Starman, and dealing with bouts of evil thanks to another shadow-dweller sharing his form. A former member of Stormwatch, Piero Rosci’s sole appearance implied that his telekinetic shield powers inspired da Vinci himself and the sketch that shares his name. This was never followed up on, thanks in part to the chaotic nature of the DCU, but if it’s true, it would make Piero more than 500 years old.

And man, that’s a cool visual. Victoria Adams (not THAT Victoria Adams, mind you) has been around since the dawn of the United States, starting out a saboteur during the Revolutionary War and popping up to defend the Republic for more than two centuries. Her latest incarnation, however, seems to have hit a snag, as she has no real memory of who she is or what she is about. She reputedly and retconnally inspired Joe Higgins to become the Golden Age Shield during World War II. Repeated retcons and revamps make it tough to figure out what’s canon with The Shield, but the upcoming revival may be removing her from the continuity. Though her actual date of birth is unrevealed, Raven Darkholme’s earliest recorded adventure was in the 1920s, when she met Wolverine (see #10) for the first time. Though her shape-shifting powers make assumptions foolhardy, she seemed to be an adult during that meeting, but as long as she was more than one year old, she fits today’s category. She is able to change her body at will to look and sound exactly like any other human or humanoid type, changing size, gender and even clothing at will. After a resurrection by magic, she can even fool the enhanced senses of Wolverine.

Yes, since her clothing is skin, she always naked, but there’s much more to her than that, guys!

Born around 1866, Alain is a prince, the son of King Adonis of The Gamma, an extra-dimensional race of ghostly aliens. In the modern day, he stole a transformation device allowing him to channel the Necrom Soul and become a powerful superhero who seems to be ready to go scuba-diving. He also underwent a heel-face turn, going from one of Kamen Rider Ghost’s most dangerous enemies to a staunch ally. One of the most disturbing members of this list, Arisia Rrab was part of a family dynasty of Green Lanterns, becoming protector of her sector as a teenager, and was identified as being thirteen years old. When the Guardians dissolved the traditional Sector structure after the Crisis on Infinite Earths, she came to live on Earth because of her crush on Hal Jordan, even using her ring to age her up biologically to become an adult woman and enter a romance with Jordan. Some years later, it was revealed that, thanks to its longer orbit, a year on her home world of Graxos IV lasts a little more than 18 Earth-years, making Arisia nearly 240 years old and implicitly taking the curse off her relationship with Hal.

None of that changes the fact that she was introduced as, treated and acted like a child, and that an alien who is a kid is still a kid. The literal creator of the universe, God-Man is thus more than 13 and a half billion years old, and is omnipotent, omniscient and omnipresent.

As for the hamburger phone? That’s just for funsies. Born around 1916 or so, Namor McKenzie is a human/Atlantean hybrid and mutant who has grown up to become the king of Atlantis and de facto leader of pretty much anything under the sea. Though he has aged from his first appearance in 1939, he’s gone from being about 18 to seemingly being a man in his early 30s, with no loss of vitality, youth or power. Indeed, he’s even more dangerous now, having once again declared war on the surface world with the help of his Defenders of The Deep. Not bad for a man who is pushing 115 years old. Sometimes known by the code-name Lady Frankenstein, The Bride was created in the late 19th Century (her ex-husband Frankenstein was active in the 1820s) by scientific weirdo Doctor Frankenstein, cobbled together out of the parts of multiple corpses. She and her ex have both become adventurers thanks to their nigh-invulnerability and undead immortal nature, and during one such adventure, she was fitted with additional arms by a villain who wanted to try and pass her off as the goddess Kali. In modern times, she became an agent of S.H.A.D.E., only to quit the organization due to its moral flexibility.

She WILL kill you, if she needs to.

Thanks to Faithful Spoilerite Sarah for this week’s topic! Feel free to follow along @MightyKingCobra for more Ten Things madness on Twitter or check out the full Twitter archive here! As with any set of like items, these aren’t meant to be hard and fast or absolutely complete, if only because a mysterious back story where you turn out to be actually 700 years old is remarkably common. Either way, the comments section is below for just such an emergency, but, as always: Please, no wagering!