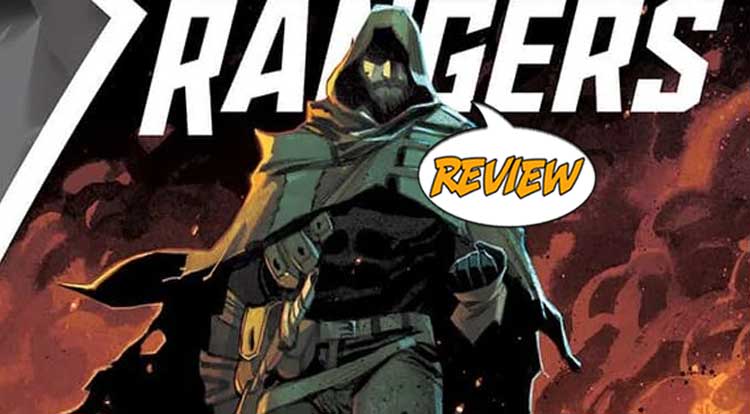 Has Drakkon betrayed The Power Rangers?  And if he has, would anyone be surprised?  Your Major Spoilers review of Power Rangers #3 from BOOM! Studios awaits! Previously in Power Rangers:  Drakkon is the key to the Power Rangers’ new mission.  But to defeat the new cosmic threat, Jason, Trini and Zack put their faith in their greatest enemy.  And the only way they may be able to save the universe is by giving Drakkon exactly what he wants…

STABBED IN THE BACK…

After last issue’s sudden attack, the aliens known as The Horrid have allied themselves with Drakkon, who offers them aid in return for his freedom.  The Omega Rangers manage to pull themselves together after last issues dramatic airlock event (Trini spaced herself and a large number of invaders), and wonder if they’re going to be able to get out of this jam at all.  With the help of XI, their cybernetic tour guide, they come up with a plan, but he refuses to explain where it came from.  The Omegas battle the aliens, while XI makes his way to their leader and threatens him with grievous bodily harm.  As the king of the Horrid laughs off his threat, unable to see how his people can lose…

…and then, Drakkon drives his sword through the alien’s chest.

This issue does a really good job of balancing our distrust of the evil Tommy Oliver with his seeming intentions to help the Omega Rangers, and when XI reveals that he didn’t want to tell them that his intel was coming from Drakkon, it made perfect sense.  There are some issues with that plot, but mostly it all works, and the art is quite impressive as well.  There are a few strange moments of anatomy (and The Horrid look remarkably like She-Ra foe Hordak, which is a visual distraction), but for the most part it all works, until the last page.  I’ve read this issue three times and I’ve been staring at the final panel and I have NO idea what is happening with it.  That problem is the biggest one in the issue, but another complaint comes when Zack mentions that the battle with these monsters reminds him of a previous battle.  Not only is he right, it calls out some of the repetition we’ve seen in recent Power Rangers arcs, which is frustrating to say the least.

BOTTOM LINE: I HAVE NO IDEA WHAT JUST HAPPENED

Overall, though, Power Rangers #3 succeeds more often than not, and the surprising actions by Drakkon are just ambiguous enough to maintain the suspense about whether or not he can be trusted, combined with above average art for a well-deserved 3.5 out of 5 stars overall.  It’s not a perfect issue, but it ends this mini-arc well and sets us off on a new adventure that, hopefully, will be clearer in issue #4 than it is on the last page of this issue.

A tense, well-written issue with a surprised or two and a very confusing final page.