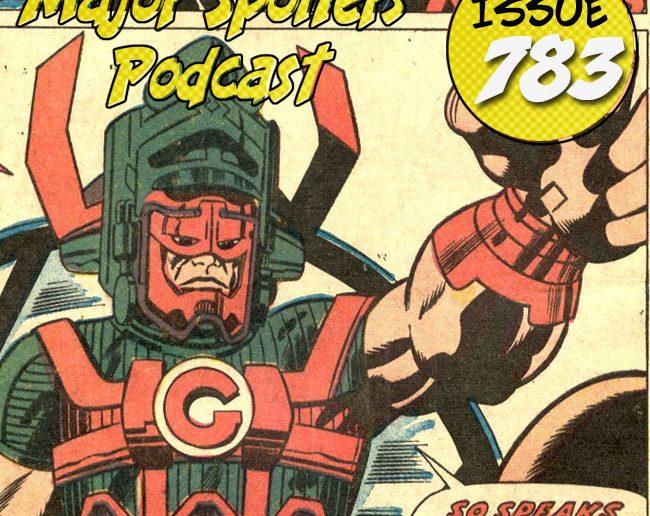 The First Family of Comics takes center stage this week, as the Fantastic Four take on Galactus and his friend, Harold. Plus, strange things are afoot at DC Comics (or are they?), your favorite burger joint, Motor Crush Vol. 2, Usagi Yojimbo: The Hidden #4, Hawkman #1, and Tomb Raider: Inferno #1 all go under the microscope.

WHAT IS GOING ON AT DC COMICS!?

Vertigo returns to its roots with a line-wide relaunch

STEPHEN
TOMB RAIDER INFERNO #1
Writer: Jackson Lanzing, Collin Kelly
Artist: Phillip Sevy
Publisher: Dark Horse Comics
Cover Price: $3.99
Release Date: June 13, 2018
Trinity is on high alert–they know Lara Croft is coming and now, under the shrewd command of a new officer, they’re ready for any surprises, but Lara is steadfast in her quest to uncover their secrets. Though typically equally prepared, this time Lara may just find herself one step behind.

MATTHEW
HAWKMAN #1
Writer: Robert Venditti
Artist: Bryan Hitch
Publisher: DC Comics
Cover Price: $3.99
Release Date: June 13, 2018
Spinning out of the events of DARK NIGHTS: METAL, Carter Hall returns to the DC Universe! An explorer of the ancient and unknown, Hawkman finds himself embroiled in a long-standing mission to discover the true purpose of his many reincarnations. Carter races around the globe trying to piece together an ancient prophecy, but will he be able to face down his past lives lurking around every corner?

RODRIGO
USAGI YOJIMBO: THE HIDDEN #4
Writer: Stan Sakai
Artist: Stan Sakai
Publisher: Dark Horse Comics
Cover Price: 3.99
Release Date: June 20, 2018
The only person who knows the true contents of the mysterious box Usagi and Detective Ishida are tracking escapes from custody–and then hired assassins attack Usagi and Ishida! The realization that someone has been following them all along leads to a plan to seek help from a very unexpected source.

Two years have passed in Nova Honda, the racing capital of the world, and for Domino Swift everything has turned upside down. How does she fit in a world without Crush?

Stan “The Man” called it the “World’s Greatest Comic Magazine,” and he wasn’t kidding. If Lee and Jack Kirby set the comics world on fire in 1961 with the debut of Fantastic Four, in 1965 they burnt it down. Letting loose an unmatched burst of rapid-fire creativity, they gave birth to the Frightful Four, the Inhumans, Galactus, the Silver Surfer and even pulled off the first super hero wedding. There’s also monster menaces galore, including Dragon Man, and out-of-this-world villains, from the shape-shifting Skrulls to the undersea warlord Attuma. But it’s not just the panel-bursting action that makes FF great. It’s the drama of a family, joined together to face all the wonders of the Marvel Universe.

Jack Kirby’s Superman – News From ME

Apparently, a number of comic book discussion boards are simultaneously discussing the fact that when Jack Kirby drew the Jimmy Olsen comic book in the early seventies, the company retouched his work. I am suddenly receiving a flurry of e-mails asking me to clarify what was done, who did it, etc.