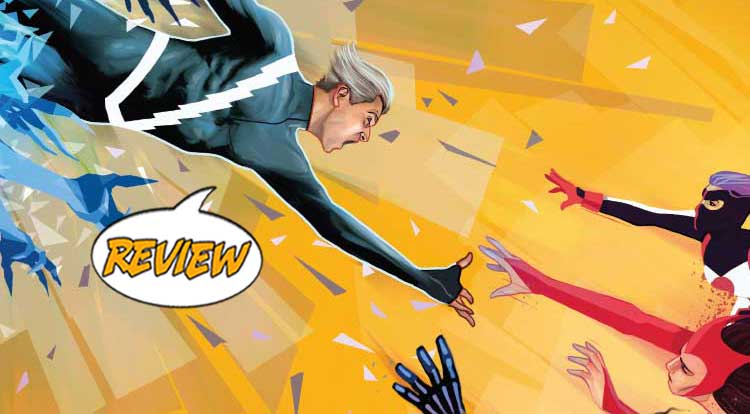 Quicksilver: No Surrender #5 (of 5) Review

Accelerated far beyond human perception, Pietro Maximoff fights for his life and family…  Your Major Spoilers review of Quicksilver: No Surrender #5 awaits! Previously in Quicksilver: No Surrender: Quicksilver has uncovered the dark secret behind the creatures that are hunting his loved ones, but knowing is only half the battle.  The other half is facing every horrible thing he’s ever done. And it’s a long list.  Can Quicksilver overcome his inner turmoil, or is he doomed to be lost forever?

TRAPPED IN BETWEEN MOMENTS

We open in mid-scene, as Pietro forces himself to calm down, to SLOW down, focusing himself on his breathing to overcome his raging emotions.  It’s a successful gambit, as the rainbow-hued doppel-Quicksilvers slowly disappear, leaving him alone… except for his own rage.  Quicksilver discovers that his rage and impatience and endless withering anger have coalesced into the most real double of them all, one that can speak and think and call him names.  Oh, and one who can break through the dimensional barriers and return them home.  Once in New York, Pietro is stunned to see things start to move again, but when his evil self streaks away to kill his twin sister, he knows he has to act, has to accept the anger as a part of him.  Coming to terms with his own darkest self, Pietro is reverted to normal speed, and reunited with his friends and family in the Avengers…

FIGHTING YOUR OWN WORST IMPULSES, LITERALLY

Finally, Quicksilver has a costume that looks really cool again!  I enjoy the one that has the fast-forward button symbol, but the classic blue-with-lightning motif is the one that reads Quicksilver to me.  This series also refuses to shy away from the negative aspects of our hero’s personality (the accumulated barnacles of years of heel-to-face-to-heel turns and one of the sourest superhero dispositions in history), instead accepting his own flaws to overcome his imprisonment.  Eric Nguyen’s art is really well-done in these pages, and his redesign of Quicksilver’s costume is truly excellent.  Nguyen even adds the amusing touch of drawing Pietro’s pointy forelocks as lightning bolts, which might have been too much under the pen of a less subtle artist.  The visual effects are nice, as well, but I’m a little bit bothered by a muted color palette that tends to undersell the monochrome evil Pietro’s effects.  Still, the final page of Pietro and his sister (and his pet turtle Mister Dibbles) enjoying a quiet moment at a diner is pure visual poetry.

The difficulty in writing Quicksilver is always justifying his various portrayals over the years into one fully-realized character.  They did it in X-Factor back in the day, but Quicksilver: No Surrender #5 pulls it off with style and subtlety, with strong art and a really nice ending, earning 4 out of 5 stars overall.  If we’re lucky, he won’t turn fully evil again for a few years and we can get a few more good stories out of this take on the fastest man alive, Marvel-version.

An in-depth character study that makes Quicksilver as approachable as he's been since that X-Factor psychoanalysis issue 25 years ago...