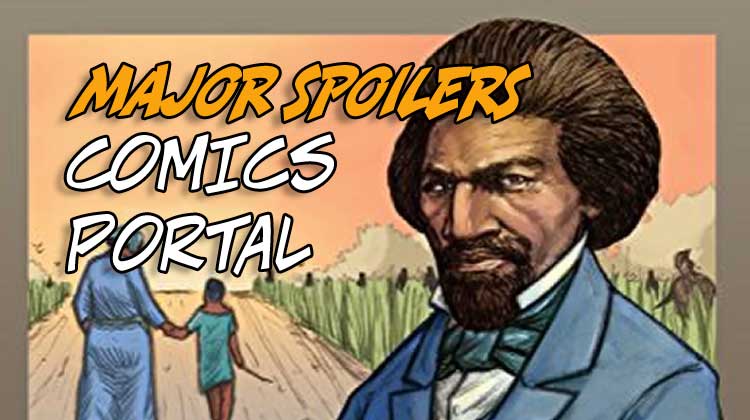 I was going through some news releases, looking for a topic to write this column about, when I discovered a graphic novel that made me wish more of this kind of comic were being made today!

It’s called The Life of Frederick Douglass: A Graphic Narrative of a Slave’s Journey from Bondage to Freedom, and it will be released in January from Ten Speed Press.

It got me to thinking, More historical comics should be made today! Before I delve into this subject, I thought I’d share some info about this graphic novel. Here’s part of the description:

“Recently returned to the cultural spotlight, Frederick Douglass’s impact on American history is felt even in today’s current events. Comic book writer and filmmaker David F. Walker joins with the art team of Damon Smyth and Marissa Louise to bring the long, exciting, and influential life of Douglass to life in comic book form. Taking you from Douglass’s life as a young slave through his forbidden education to his escape and growing prominence as a speaker, abolitionist, and influential cultural figure during the Civil War and beyond, The Life of Frederick Douglass presents a complete illustrated portrait of the man who stood up and spoke out for freedom and equality.”

A little more worth relating:

“Along the way, special features provide additional background on the history of slavery in the United States, the development of photography (which would play a key role in the spread of Douglass’s image and influence), and the Civil War. Told from Douglass’s point of view and based on his own writings, The Life of Frederick Douglass provides an up-close-and-personal look at a history-making American who was larger than life.”

I see his name on something, I buy it!

This book will cost $19.99 and will be available on January 8, 2019. If it doesn’t come through Diamond, I will be after it on Amazon or through local bookstores. I know that “learning” is a word some comics readers don’t like to hear, but in my mind, comics are the perfect way to teach history.

Much like science fiction, comics rely only on the imagination of the person writing the script and the ability of the artist to tell a great story. You don’t need actors, make-up, special effects or any other such materials. You just need someone to research and script the story and an artist or two to place that tale in a format that can be printed.

There’s a perfect example of a historical comic story that I learned so much from. There’s been a series on The Loxleys from Renegade Arts Entertainment, and I discovered so much about our neighbors to the north, Canada, through at least two of those books–The Loxleys and The War of 1812 and The Loxleys and Confederation. That latter book showed how Canada came together as a nation, which I previously knew nothing about.When I interviewed writer and historian Mark Zuehlke for my podcast, I found out more about Canada than I had ever known before! I still highly recommend them!

And there’s another series of books based on history that I adore. They’re about Admiral Yi Soon Shin, a Korean naval commander who saved his people from Japanese invasion forces during the Imjin War (1592-1598). They’re crafted by Onri Kompan (see above, left), a creator who has had to struggle at times to get these excellent comics available to the public. If you go to many comics conventions, you’ll find Onri promoting and selling his Yi Soon Shin books, often completely selling out of the copies he brought with him. For more on his comics, go to his website here. You can still listen to my interview with Onri at this link.

A quick story on Yi Soon Shin: During a recent con, I introduced the first collection of this series to my brother. That night, he started to read it, and he simply couldn’t put it down! The next day he was after the second volume, and that evening he devoured it as well! Now he’s a big fan, just like I am! Again, I highly recommend this series! History done right!

What about Maus: A Survivor’s Tale, the story of a son relating his father’s experiences during World War II? It’s a classic, if you haven’t read that one yet!

SHOULD MORE HISTORICAL BOOKS BE MADE? The sad thing about the Frederick Douglass book is that it’s not from Marvel or DC. It’s from a company I’d never heard of before. Now, this isn’t the first comic graphic novel Ten Speed Press has printed, but it’s the first I’d ever discovered.

I’m definitely checking out more of their product, maybe even going to seek out folks to talk with for my podcast!

The thing about historical comics is that they likely don’t sell all that well. They must buck the trend of people being turned off by “learning.” After all, superheroes and action rule the industry today, and talking about real people (and likely having to tell stories accurately) doesn’t titillate comics readers as much as Nightwing getting injured or Spider-Man facing a new Armageddon or the like.

But that doesn’t mean we shouldn’t try.

Granted, you don’t have the freedom to change the story or the characters if you’re trying to tell the story the way it really happened! But I think we don’t appreciate history as much as we should. We can learn so much from those who have gone before us!

I’m going to do my best to seek out historical comics like Frederick Douglass and give them more attention, hopefully even review them! I’m expecting to learn a lot about this person, including his accomplishments and the times he lived in.

And I highly recommend you do the same! After all, “learning” isn’t a four-letter word!

What do you think about historical storytelling? Does it interest you? Not? Should we have more of that kind of comic in the market today? Whatever your opinions, be sure to share them in the space below!