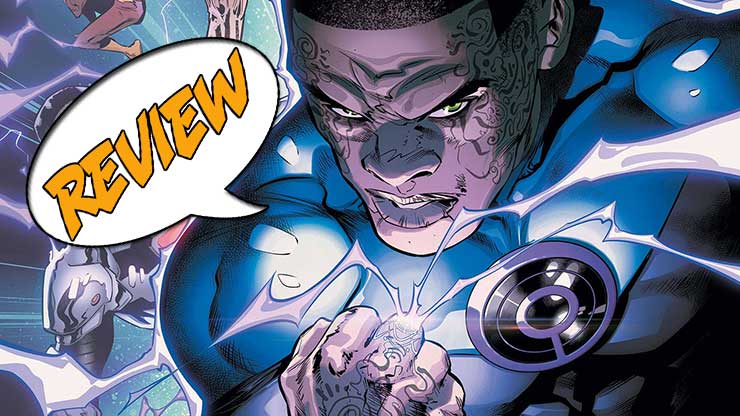 What does the Ultraviolet Corps have to do with the Totality? How are both of these in any way related to the Still Force (the counterpart to the Speed Force)? The threads of the web start connecting in Justice League #3! Previously in Justice League: Lex Luthor appears to be the mastermind of the plot, manipulating the Justice League to get them right where he wants them. Superman and J’onn J’onnz are inside the Totality with a miniaturized Batman and Hawkgirl helping their bodies fight off mutation. Luthor, too, is miniaturized and along for the ride. Meanwhile, the rest of the League fight John Stewart, who has become part of the Ultraviolet Corps.

PARTS OF THE PUZZLE ARE COMING TOGETHER

In Justice League #3, we start out following a young Sinestro, before his Lantern Corps days, when he was in inter-galactic anthropologist. He discovers something called “Umbrax,” depicted with another rune which we have seen previously. Then we cut to the battle between John Stewart and Wonder Woman, The Flash, and Aquaman. John’s constructs are hugely powerful, drawing on the negative emotions of the League itself until Cyborg arrives and knocks him out.

This is a universe-spanning tale, and a lot comes together here, but despite this, it never feels like an information dump. Inside the Totality, Superman and J’onn fight their way in against creatures that seem to be devolving to a more basic level – think survival instincts. This fight is also happening inside their brains, where Batman and Hawkgirl have to stave off mutagen clusters. Then J’onn and Superman find huge beings like the giants that were trapped on the Source Wall, and J’onn is sure not only that they want to communicate but that he can communicate with them. I love his hope and optimism, and how he has tried to hold on to that throughout, but it turns out this is yet another defense mechanism. With them, but on a microcosmic scale, Batman and Kendra are mainly along for the ride, but we do discover that Lex Luthor is not the only villain here; he has managed to slip the Joker into J’onn’s bloodstream. How creepy is that?

Justice League #3 really feels like there is a race against time. While Superman and J’onn are thus occupied, John Stewart reveals more information about the invisible spectrum, including what Sinestro knew – that at its heart is a living phantom galaxy powered by a sentient black sun called Umbrax. Umbrax is drawn toward planets where self-destructive forces are stronger. But it’s not the only hidden force – there are others, locked by some sort of cosmic stasis, which appears to be in a dead zone in the ocean. There is an underwater base there, of ancient Atlantean build. There Aquaman, Wonder Woman, and the Flash discover some beings there in stasis that resemble primitive White Martians, and who break free and attack.

At the same time as all of this, Green Lantern and Cyborg have gone to the remains of the moon, hoping to be able to track Umbrax. Sinestro shows up, and they ask why he set Umbrax free. As it turns out, he intended to lock it away, but when he got there, he found it had already been released. He tracked it only to find that the world that had drawn it in…was our own Earth. The invisible spectrum is already here.

JIMENEZ DOES NOT DISAPPOINT

The artwork in Justice League #3 is beautiful, interesting, and moves the story along very well. Facial expressions are intense and meaningful, from Wonder Woman’s determination to get through to John Stewart, to J’onn’s eagerness and optimism in the Totality. The action scenes are big, bold, and clear. The settings are magnificent. Even the microscopic mutagens have a distinct malevolence about them.

Use of panels in comics has gotten so much more sophisticated than it was “back in the day.” And there are a lot of cool panels in Justice League #3. Insets are used for close-ups, key shifts in point of view, or for showing what Lex Luthor is sneakily doing in the midst of other action. The mix of larger and smaller panels allows for more space for larger or more dramatic scenes such as Cyborg’s entrance. I also love the use of silhouettes in the underwater scene. (Bonus there – it comes with a joke about Wonder Woman’s invisible jet.)

Late in the book, there is a full page showing the Joker sneaking up behind Hawkgirl. It is both terrifying and drop-dead gorgeous. The lines, inks, and coloring here are just delectable

BOTTOM LINE: THINGS ARE GETTING DARK, BUT WE STILL FEEL HOPE

Justice League #3 is a dark story, and it’s full of the unsettling feeling that much of that darkness comes from within. I appreciate that, despite this, the team works together and supports one other rather than fall prey to blaming each other. They can still maintain a sense of humor and joke around, which I love to see and which I think enforces their strong sense of team. I, for one, am eager to see where this goes next.

A tale of the darkness within, with still more yet to come.