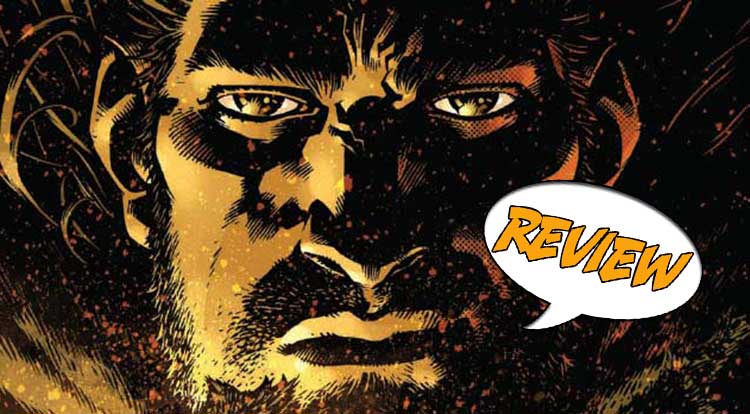 During the carnage that was The Cape one shot, lead character Eric vanished for three days.  What did he do during that period?  Who did he meet and what was their grisly fates?  Join writer Jason Ciaramella as he returns to chronicle those 72 hours of utter horror in The Cape: Fallen #1 from IDW Publishing. Previously in The Cape:  Eric, reunited with the Cape for the first time since he was a child, vanishes for three days.  Before he returned to wreak havoc on all those who slighted him in the original one-shot, what did Eric get up to?  Confused by his new powers, Eric returns to the cabin in the woods that represents the last time he was truly happy.

The Cape took a standard concept of boyhood wish fulfillment, then stuck it in a blender and splashed the gory contents across the page.  Brain damaged Eric, bitter about his lot in life, re-discovers the cape that gave him the ability to fly as a boy.  After years of being downtrodden, ignored and misunderstood, what would you do if you were presented with the ability to fly?  Share your good fortune with your loved ones?  Or embark on a reign of terror against everyone you think treated you badly?

Eric chose the latter in the original one-shot, inspired by the short story by popular horror writer Joe Hill.  There was enough in the adaptation by writer Joe Ciarmella to evidently sustain this new mini-series.  The key question in the opening issue the reader walks away with is this:  are villains born evil, or do events and their environment make them like that?  Outside the strictures of the original one-shot, Ciarmella has the opportunity to show more of Eric’s backstory, enabling a greater understanding of what made him tick as a boy, and how those events echoed down into adulthood.

Eric’s disappearance for three days begins The Cape: Fallen #1.  Trying to come to terms with rediscovering the cape, Eric flies to a cabin he, his brother Nicky and their Dad stayed at when he was a boy.  It is his one last memory of something good in his life before his brain injury altered his life forever.  Encountering a group of LARPers staying in the cabin, Eric is invited by a former school classmate, Josh, to stay the night.  A rip-roaring game of D&D ensues, and the atmosphere is full of acceptance and good fun.

It’s only in his tent later that Eric finds himself confused, unable to understand why Josh, who tormented him in school, is so friendly to him now.  Words of apology on a note deepen his confusion, and his dreams are consumed by images of guilt at his treatment of his ex-girlfriend.

Eric is clearly badly damaged by what happened to him as a boy, and how he reacted to that as he grew into an adult.  Many of his issues are self-inflicted; his inability to see outside his own frame of reference has crippled him psychologically and socially.  His rediscovery of the cape offers him an opportunity at redemption, which in the one-shot he spectacularly fails to embrace.  So the tension in The Cape:  Fallen #1 comes as much from what we know he will do later, as to how he got into that headspace during the three days in the woods.

Artist Zach Howard and colorist Nelson Daniel deserve to be singled out for their sterling work.  The use of light and shade, to isolate Eric from the others for most of the issue, foreshadows his ultimate actions.  Solid line work complemented by some brooding colours really cement the issue in the reader’s mind.  This is some great artwork for the reader to savour.

As a reader, you can choose to pick and choose which bits of The Cape: Fallen #1 interest you the most.  I enjoyed it all, but for some, philosophical discussions about the nature of evil can be a sterile debate.  For them, the real, brutal impact of those debates comes to life in the actions of Eric, the boy who flew once, then fell and has been falling ever since.  The Cape:  Fallen #1 is as much a cry for help and understanding, as it is an issue that presages the gory vengeance to come.

Evil’s origin is examined in this tense opening issue of the Joe Hill inspired mini-series, The Cape: Fallen.