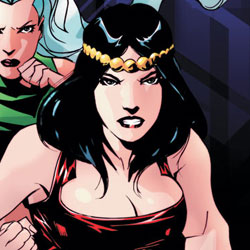 If you’re Batman you have a plan to take out just about everyone, including the Justice League. Terry McGinnis may have practiced a routine a time or two to please the old man, but when push comes to shove, and the Justice League is standing the way, will he be able to take them down? Previously in Batman Beyond: Having been diagnosed with a terminal illness, Carson Jatts risked it all to get his hands on some Mentachem, with disastrous results. While fleeing the Justice League headquarters, he seeks refuge in a mall, takes hostage, and seals the place up real tight. Oh… Did I mention Terry’s mother and brother are inside too?

WE’VE PLANNED FOR THIS

With Bruce talking non-stop in Terry’s ear, it’s hard for him not to play along with the elder Batman’s plan to try and take down the Justice League so he can deal with the hostage situation on his own terms. It starts out as a good fight, with Terry clearly gaining an edge, but when Aquagirl touches a nerve, Terry hesitates for one second, giving the League the upper hand. Breaking the Bruce Wayne spell gives Terry a chance to reevaluate the situation and talk everyone into working together for the better good.

I like this outcome to the fight. Beechen clearly plays up the fact that Batman and the JL are wasting too much time fighting while Jatts does who knows what on the inside. And I like that Bruce Wayne gives in to the idea too, even though he seems to be taking a bit too much pleasure in living vicariously through his younger (clone) self.

Once again Beechen mixes intense action with some better than average dialogue and a more realistic story outcome… well as real as you can get when you are talking about superheroes in the future. Things get even more interesting at issue’s end when Jatts discovers his true potential as the new Matter Master, which could threaten every person on the planet… except this is an ongoing series, so we know who is going to win in the end.

BRILLIANT COLORS ON THE IPAD

Once again, I’m reviewing this issue of Batman Beyond on my iPad, thanks to DC Comics’ day-and-date release of the series. While I do enjoy the colors found in the printed page, they pop and look brilliant on the iPad screen. David Baron brings the entire world of future Gotham to life, enhancing the fantastic pencil and ink work from the team of Stanisci and Benjamin. Benjamin’s layouts work well enough in this book to make the action move along quickly, and there are enough big reveal moments that give the entire art team moments where they can really shine.

The cliffhanger ending last issue didn’t fizzle in Beechen’s as the series gets to issue #2. This volume isn’t as deep or as heavily mired in past continuity that the previous mini-series was, and is easily accessible by new readers. And even though the future of the DCU is a dark one, this issue isn’t heavily mired down in deep depressing moments, and is an interesting read for fans of Batman. I like where Beechen is taking us so far, and seeing future Barda drawn up right by Benjamin and Stanisci makes the issue easy on the eyes. Overall Batman Beyond #2 is worth picking up and earns 3.5 out of 5 Stars.