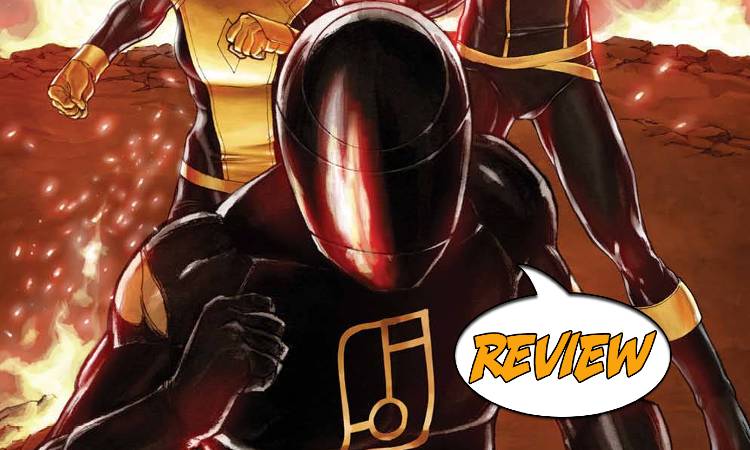 Who is the Gold Omega Ranger? Or, more importantly, who will they be next? Your Major Spoilers review of Power Rangers #22 from BOOM! Studios awaits!

Previously in Power Rangers: With the new Ranger wreaking havoc and bringing destruction, Andros realizes the scale of his mistake, and that the planet is in grave danger. But when the deadly Ranger seeks a new host, an unexpected and much-beloved victim becomes the next tool of death, at the expense of the Omegas…

Having recovered the body of his best friend from stasis, Andros the Red Space Ranger made the incredibly stupid decision to awaken him by bonding him to an unknown being who has been speaking to him through the Morphin’ Grid. As soon as they, along with the Red and Blue Omega Rangers, return to the Astro Megaship, “Zhane” fires all weapons and destroys the orbital station where his Ranger form had been held. Jason and Yale’s distrust blooms into full-on anger at the display, but whatever is inside the Silver Ranger simply smiles its skull smile and introduces itself, “Spa’ark of Avadias… The Gold Omega Ranger.” Andros reveals that the legends of the ancient Omegas included Spa’ark’s transcending of death itself, which is why Andros hoped that the spirit could help bring Zhane back. Of course, Zhane’s limited powers are nothing compared to those wielded by Jason and Yale, which leads to the most shocking reveal of them all…

“THERE IS NO GOLD OMEGA RANGER”

This issue also features a secondary plot where Journey faces off against the last acolytes of The Empowered and the mystery of her aging once again, as well as a little bit of Billy and Tommy back on Earth, but the real buildup is all about the Death Ranger, and it’s really nicely done. On the art side, this whole issue looks great, even managing to make dynamic moments out of a conversation between the Red Omega Ranger and the Silver Space Ranger. The sight of a horde of alien zombies rising to face Trini and Zack is also a highlight, making good use of Power Rangers’ lore. The big finale of the Parrott era of Power Rangers is upon us, and this issue has put the pieces in place for issue #100 and whatever comes next. It’s certainly not a jumping-on point, but it’s an exciting issue for those who have been following the Charge to 100 event.

As the penultimate issue before the big anniversary event, Power Rangers #22 is a successful cliffhanger, the kind of setup that makes readers wonder what in the world will happen next, with strong art throughout, a compelling villain, and inter-Ranger conflict making for 4 out of 5 stars overall. If you’ve missed the last couple of issues, I’d read them first, but it will be worth your time once you get to this one.

The big 100 is up next and thirteen Rangers are assembled to see it all shake down... but they may not all be alive when it gets here.