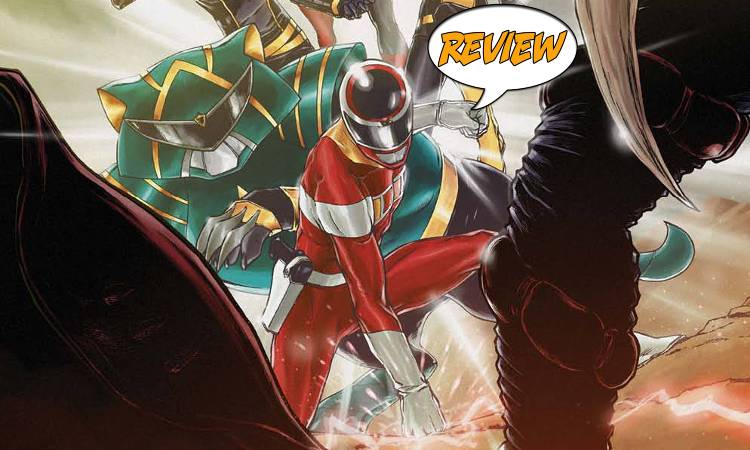 A shocking return, a more shocking heel turn and potential massacre? Just another day in the life of the Omega Rangers. Your Major Spoilers review of Power Rangers #21 from BOOM! Studios awaits! Previously in Power Rangers: Jason is determined to help a grieving friend find a lost ally, no matter the danger and no matter the cost. However, things aren’t as they seem when the opportunity for an unexpected betrayal arises, leading to the arrival of… a new Ranger?

Things are about to get complicated.

The Omega Rangers have joined forces with Andros, a Red Ranger who in the original continuity became the leader of the team during the events of Power Rangers In Space. Their attempts to find the stolen Astro Megaship and Andros’ kidnapped sister have become personal for Omega Red, Jason, after the loss of Jason’s mother last issue, meaning that the team’s leader isn’t seeing all the red (ranger?) flags. While Zack and Trini try to deal with their unintentional parenthood with young alien Journey, the two team leaders and Yale the giant alien blue kitty cat infiltrate planet XV-47 to reclaim the ship, only for Andros to sneak off and find the body of his best friend, Zhane, held in the ship’s suspended animation area. (All spaceships have one. It’s right next to the brig.) As things heat up space, the situation on Safehaven is equally bad, as followers of one of the villains imprisoned in the planet’s vault arrive to break it open, leaving Journey to fight, while Andros returns with Zhane, AKA The Silver Space Ranger…

…possessed by The Death Ranger!

As the Charge to 100 event builds, leading up to BOOM!’s hundredth issue this fall, Parrott leans hard into the questions of how this post-Shattered Grid altered timeline works, and it’s disturbing. Seeing Andros and Zhane seemingly turn on their Ranger colleagues is a shocking moment, especially the horrifying hint of a skull-face behind Zhane’s faceplate, but the larger battle is equally interesting. It’s definitely some deep cut stuff, though, as Andros’ sister is in the clutches of Dark Specter with this issue referencing a number of moments, situations, and characters from not only the first 20 issues of this book, but the first six seasons of Power Rangers. The art is also interesting, though I have to admit my favorite part is Andros’ all-black stealth-suit. The sequences on Safehaven feature a number of cool alien folks (including one who looks a lot like Piccolo from Dragonball Z) but they’re all lively and organic in their designs. I especially like seeing how expressive Journey and her would-be Piccolo-boyfriend’s faces are as they realize that they have to fight in the absence of any super-powered friends.

BOTTOM LINE: A GOOD ONE, BUT NOT A JUMPING-ON POINT

All in all, Power Rangers #21 makes for a good read, but it feels very much tied into the stories that have come before, which may be a barrier for new readers, but the quality of this issue’s art and the larger coming-of-age elements for our heroes make for an interesting chapter in the build-up to BOOM!’s sixth anniversary issue, earning 3.5 out of 5 stars overall. The methodical introduction of the ominously named Death Ranger is also working for me, so PR fans should really give this one a look.

This issue's big twist was highly telegraphed last issue and still worked, while the increasing tensions on Safehaven and in space are building nicely. Plus, Andros and Zhane get cool and/or terrifying new looks.