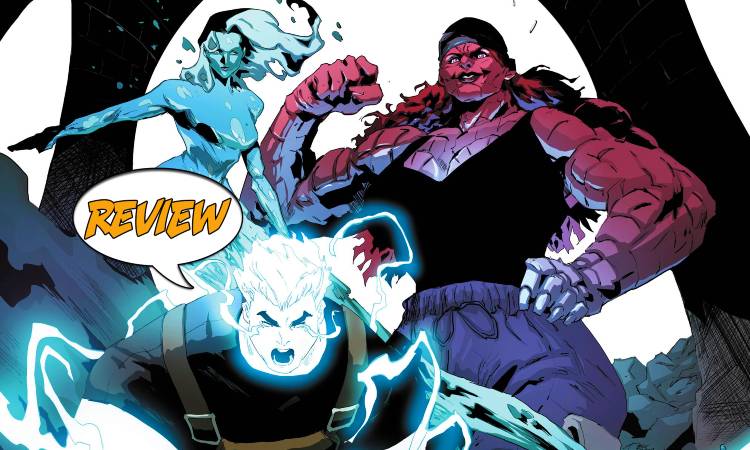 Fade and his crew have been trying to stop Holocaust’s takeover of Dakota, but there’s new players on the streets. Your Major Spoilers review of Blood Syndicate: Season One #4 from Milestone Comics awaits!

Previously in Blood Syndicate: Season One: As Holocaust rampages through Dakota, Wise, Tech, and Fade are just trying to survive… but so are Aquamaria, Third Rail, and Brickhouse! When these two groups cross paths, they can tell the balance of power in the city is shifting… if they can avoid killing each other long enough to take that power!

After attacking the other gangs on Paris Island, Holocaust targeted the police, attacked the station where Wise Son was being held, and clashed with Fade and Tech. On the other hand, his attack allowed them time to escape into the sewers, where Aquamaria is waiting to help with the getaway. By the time they escape, it becomes clear that the pyrokinetic has hit all the other gangs, leaving a few super-powered members (whose origins at the Big Bang are explained in these pages) here and there. Having saved Wise Son, Fade finds himself in the company of almost a dozen super-powered members from various gangs, just in time for Holocaust to take over broadcast frequencies and declare that Paris Island is his territory now…

…before blowing up the only bridge to the mainland.

As with previous issues, this one took a couple of reads to get all the various time-shifting squared in my head, which does work a little bit against the entertainment value of the issue. That said, the assembly of the Blood Syndicate feels like the modern revamp that this concept needed, and this issue’s addition of Third Rail, Brick House, and Masquerade brings their numbers to nearly full strength, a necessity against their opponents. This issue’s art is half Chriscross and half Hill and Castro, and while both halves of the issue are fine, it’s a noticeable change between styles. The coloring helps a lot, and Hill’s storytelling during the combat sequences is actually somewhat clearer than last issue’s fight sequences, so that’s a plus. I also appreciate the dramatic buildup to the final explosive panel.

BOTTOM LINE: IT’S GETTING THERE

Given that the original first issue of Blood Syndicate opened with the group already assembled, I’m rather enjoying seeing things come together in real-time. Blood Syndicate: Season One #4 expands upon the original concept (the assemblage of characters for the Big Bang was a protest against police violence rather than the gang fight of the original) while keeping the spirit of the original and improving on the first three issues’ presentation, earning 3.5 out of 5 stars overall. In today’s publishing climate, I’m not sure if we’ll get more Milestone after the miniseries ends, but I’m hoping for more Blood Syndicate.

This issue brings in a a number of players just in time and finally reveals the stakes of Earth-M, but it took me a little work to piece it all together.