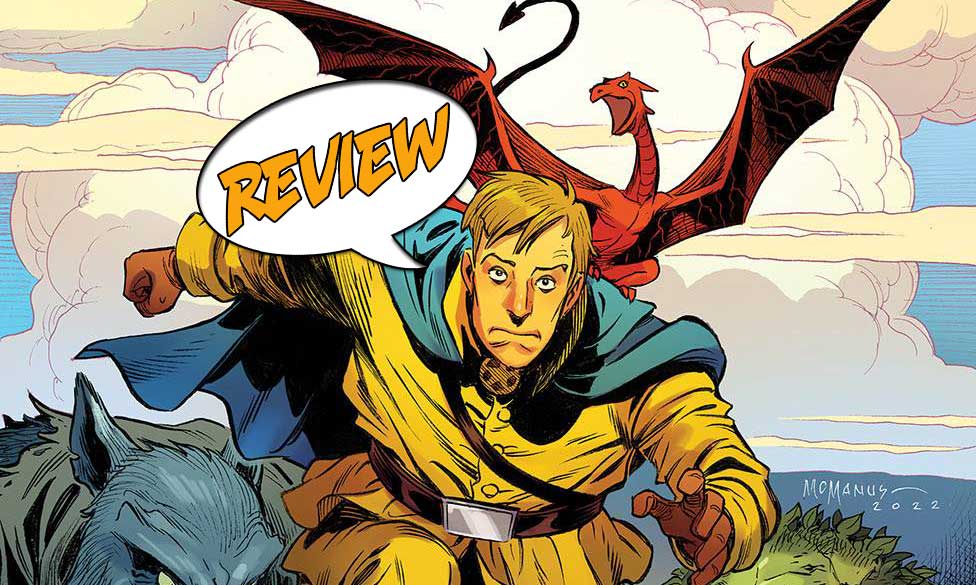 Fletcher and Guy arrive at the Oberwald Trollhome. Fletcher begins to understand the 1importance of their mission. Will the trolls be willing to help them? Find out in Arrowsmith: Behind Enemy Lines #5 from Image Comics!

Previously in Arrowsmith: Behind Enemy Lines: At the prison camp, the Black Baron discovers that the man he was looking for is gone. The Baron has allies in the Lupa (werewolves) and sends them on the hunt, despite warnings from the Crux. Guy learns more of his mission from Fletcher’s orichalc chips. With the Peace of Charlemagne, humans made a pact with the Lightborn to keep humans out of Fae lands. Now the Allied Powers are negotiating safe passage through their lands that would let their armies travel anywhere undetected. The Central Powers learned of this and have taken a Lightborn princess as hostage. The only way to locate her and rescue her is to go through the Trolls – and that is where Fletcher comes in!

As Arrowsmith #5 opens, Fletcher dreams of an old man, a warm pool of water, and a water sprite. He awakens to Guy speaking to him in German. Half asleep, he responds in German. Guy has cast a language spell on him. They continue their travels and fly until they reach a cliff face in the woods. Guy casts a spell and a huge door becomes visible. A troll opens the door, recognizes Guy, and lets them in.

This is the Oberwald Trollhome, magically hidden from the eyes of humans. Fletcher is entranced. They are taken to the King, who agrees to help them, but then they must leave. They are taken to their chambers for the night and Fletcher tries to absorb as much as he can by observing as they go through the underground community. They are given the freedom to go where they like – except through any locked doors.

Fletcher takes advantage of this. Seeing the trolls doing their nightly rituals reminds him of watching Rocky. He thinks about what Rocky left behind in order to travel to the States, to live and work among humans. He has some questions about the Fae lands and returns to the room to ask Guy. Fletcher did not learn a lot of world history in school, much less anything regarding the Peace of Charlemagne.

Charlemagne was fascinated by the Lightborn, so much so that he built his capital at Aachen. Not only was it known for its hot springs, it was also a place where the border between the worlds was thinner. Charlemagne wanted to meet the Lightborn and learn more about them. Fletcher describes the man in his dreams and asks if he communed with water sprites. But that is only part of the history. For his deeds, Charlemagne was blessed by Rome and made emperor of the Roman lands, but he was also named as a favored ally of the Seelie Court. He was one of the rare Herze-Kings, kings who could draw upon magic.

And, through all the succeeding generations, not only is this ability spreading among humans, but the amount of magic in what was once know as the Sunlit Lands has been decreasing. Now they are known as the Evening Lands.

The next day, the spell is cast. Trollhomes are located half in the human world and half in the Evening Lands, so their spells have more reach. Through this, they determine that Lyraeli is indeed a prisoner and they know her general direction – further north and east!

WORLD-BUILDING AND HISTORY AT ITS BEST

Arrowsmith #5 takes us to yet another new place and the art truly does it justice. We only catch a few glimpses of the Trollhome, but every panel shows us a snapshot of how it is interesting and different from the human world. The trolls themselves are humanoid, but rocky and leafy. Their garments are simply cut and pale in color. They take their meals communally. Fletcher sees some of their statues and wonders whether they could be gods or ancestors. Being humanoid, they seem familiar, but only up to a point.

I like the flashback we get to the story of Charlemagne. This takes place a thousand years or so in the past during a time when the Church was very closely tied to royalty. It is interesting that even back in that time, seeds of conflict between the Church and the Lightborn were growing into a conflict that we’ve seen ongoing indications for between the Black Baron and the Crux. That sort of history brings an extra richness to the world, and the art helps us fly through that history by spotlighting a few crucial events.

In Arrowsmith #5, we start to comprehend the conflict behind the conflict. The Great War is only the surface battle; beneath it all is the potential for a hidden war with perhaps even greater consequences. Intrigue abounds!

Fletcher begins to understand how little he knows of the history of his magic.