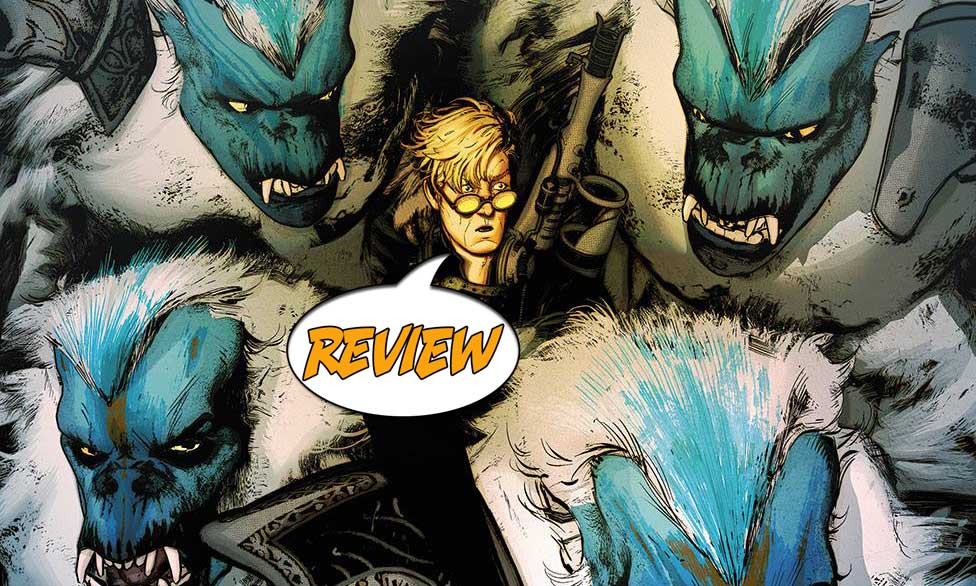 The prince is returned to the Sasquatches – and then they declare war! What machinations are underway in the Sasquatch city, and can Virgil and Gladys quiet things down? Find out in Hellcop #7 from Image Comics!

Previously in Hellcop: A pair of hunters in the Pacific Northwest shoot a sasquatch. This spells trouble for rookie Hellcop Gladys, stationed at the local outpost. She manages to get the wounded sasquatch into her custody and get the hunters’ phones before they can post anything to social media. At Hellcop Central, Virgil and Taj observe Efren’s latest invention, a reality projector that could allow magic to be used on Earth. Then the call from Gladys comes through, and Virgil heads to the outpost. The Sasquatch appears to have been wound before he was shot, perhaps by his own people. Then the incursion alarm goes off as a band of Sasquatches arrive demanding their missing prince!

A VISIT TO THE SASQUATCH CITY

Hellcop #7 opens as a kid follows a strange looking person with unusual ears and sees him walk through a wall. He touches the wall and finds that he can step through, and suddenly he is in a completely different world. A chance discussion about a John Lennon concert, because he is still alive in this dimension, may be the start of a business venture.

Virgil and Gladys follow the Sasquatches back to the portal. It seems like everything has resolved quietly until a Sasquatch arrow comes flying back through the portal. It has a declaration of war attached. Dragging Gladys along with him, Virgil decides that now they are on a serious diplomatic mission. Gladys is a little trepidatious, but also excited for her first visit to Hell, or 1301-A.

They are taken to the King. Chancellor Sevel asserts that they are obviously spies and that they should not be trusted. The King says he will make up his own mind. Virgil fills Gladys in with a lightning review of cultural highlights. Sasquatch society is very structured and rigid, and he warns her about gestures that could be perceived as threatening.

Virgil apologizes for the incident with the Prince and reminds the King that they tended his wounds. But Sevel insists that the Kanamar is missing. The Kanamar is the essence of Sasquatch rulers, and it resided in a stone that he wore. Gladys does not recall seeing anything like this. The King gives them a day to find it. Virgil sends Gladys back home to start looking and asks for a private audience with the King

Virgil tells him that the Prince was stabbed in the back, probably here, and dumped on Earth. The King knows. There may be civil war brewing among the Sasquatch, but Earth would be in the middle.

Gladys searches the area for the Kanamar but cannot find it. She has the idea to look through the phones, and indeed finds a picture. As she drives away, Sevel comes through the portal. He has been plotting against the King. Civil war would be enough but having the Kanamar would be even better.

Gladys finds Wil and pries out of him that Eddie is trying to pawn the necklace. She arrives at the pawnshop as they’re trying to agree on a price. As stolen property, she confiscates it. And she is well within the deadline of 24 hours!

A NEW CORNER OF THE WORLD

Overall, the art of Hellcop #7 is pretty good. There are some places where, especially with minor characters, the faces seem exaggerated, or the heads seem out of scale with the bodies. The opening sequence has a couple panels where this is obvious. Still, it does not detract hugely from the story. There are a lot of clever background details to help balance out quirks like this.

The main characters are much more consistent. I like Gladys. She is a tough, strong woman and she comes across as confident and capable. She is also not over-confident. When she has the chance to travel to 1301-A, you can see that she knows it is dangerous, and we get a sense that maybe she hasn’t done all of her homework on it. And it is through her eyes that we see the Sasquatch city, which is in a futuristic gothic style, an interesting contrast to our first impression of the party that was sent to retrieve the Prince.

Hellcop #7 is an imaginative romp. I do like the way it takes a Sasquatch as the idea for the plot and makes them denizens of Hell, a people with their own distinct culture and society who could probably decimate Earth if they cared to.