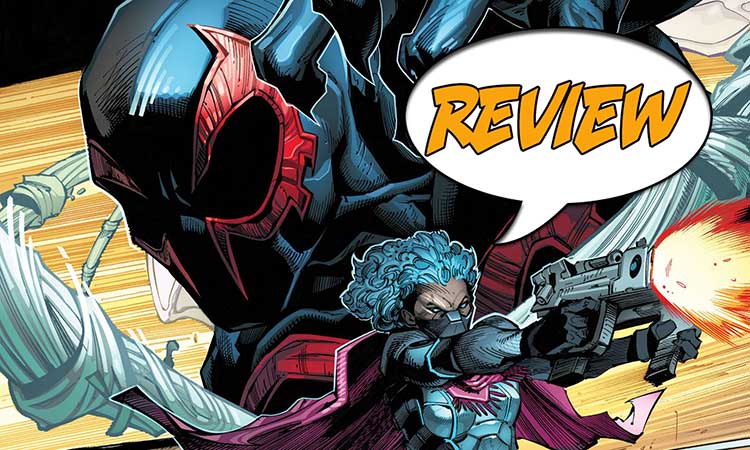 Spider-Man is going to need some help from some dark places if he’s going to keep Norman Osbourne away from more power.  Your Major Spoilers review of Spider-Man 2099: Exodus #1 from Marvel Comics, awaits!

Previously in Spider-Man 2099: Exodus, after a massive Celestial body crashes into the Wastelands outside of Nueva York, a new Garden of Eden erupts from the crash site, offering unimaginable power. After some digging, Miguel O’Hara, has uncovered it’s The Cabal who wants the Celestial Garden and its power for themselves.

Spider-Man 2099: Exodus #1 opens with Miguel O’Hara explaining to Ghost Rider that Norman Osbourne has put an invite to his cabal out for anyone who can secure the Celestial Garden for him.  Ghost Rider explains that he knows The Winter Soldier would be willing to make sure that doesn’t happen in exchange for intel, which Spider-Man agrees to.  Things then shift to The Winter Soldier.  After getting her backstory, things come back to the present with her confronting someone from her past. This confrontation leaves her with a hard drive that she needs to bring to the Celestial Garden to repair in order to know her true past.  Along the way she’s confronted by Crossbones and the two have to fight it out in order for her to uphold her end of the deal she made with Spider-Man.

AN ACTION MOVIE CHEESEFEST WITH NO SELF-AWARENESS

It’s hard to tell if Spider-Man 2099: Exodus #1 doesn’t take itself too seriously, or if it really takes itself too seriously.   There are times when this book reads like something out of the original 2099 lineup and there are times when it reads like it’s parodying those original books.  On one hand, there’s some fun toying around with these familiar characters. For example, The Winter Soldier being the last remaining member of a group that was based on Bucky Barnes is neat, Ghost Rider being a sentient AI is a fun little twist as well.  But then there’s so much over-the-top seriousness with the dialog it comes off as silly, but not in a fun way. There’s a moment in this comic when The Winter Soldier says “I am The Last Winter Soldier, and for too long I’ve been left out in the cold.” And the rest of the issue is filled with one liners like this, but at no point is there any indication that this isn’t supposed to be taken anyway other than serious.  As for the plot, it’s actually a neatly contained story that has a definitive end.  It’s a bit sudden, but there’s closure.    Also, while the dialog isn’t great, the action sequences that go with it are well done and really convey the brutality of the violence without resorting to excessive blood or gore.

The 2099 books haven’t necessarily been known for their subtlety or restraint when it comes to their art, especially the character designs (look at the 2099 versions of Doctor Doom or The Punisher for proof of this).  But, here we get both a Winter Soldier and a Crossbones that take the looks of the original and add just enough technology/body horror to make them interesting and in-world appropriate, and not a single unnecessary spike to be found.

BOTTOM LINE:  A ROMP IN A FUTURISTIC WORLD, BOGGED DOWN BY ITS DIALOG

Spider-Man 2099: Exodus #1 provides a mostly self-contained story that manages to give its main players a fairly decent character arc while also expanding on the grander setting.  It unfortunately is riddled with dialog choices that make it hard to figure out exactly what sort of tone this is going for.  3.5 out of 5 stars.

Spider-Man 2099: Exodus #1 is an action-focused book that shows a side of the 2099 universe not often seen. But, one too many one-liners dampens the reading experience a bit.