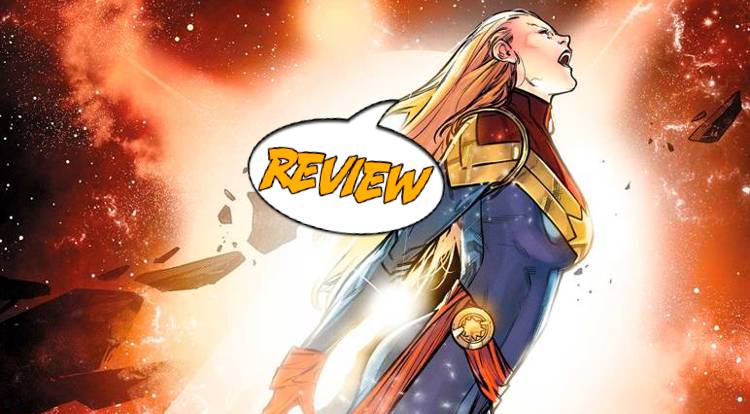 Previously in Captain Marvel: After the brutal fight in “Last of the Marvels,” Carol Danvers deserves a break. And so does fellow “Marvel” Monica Rambeau. But with a mysterious new friend joining her on Earth, the heroes have no time to breathe. There’s no telling what this new force in the Universe will do next.

Having returned from space, where a villain calling itself Vox Supreme tried to kill them both, Captain Marvel and Spectrum are engaged in more simple pursuits: The punching of giant monsters. They’re aided in this endeavor by Binary, a powerful super-being whom Carol accidentally created with the help of the Phoenix Force. Though she’s incredibly powerful, Binary doesn’t really know anything about Earth, leading the Marvels to take a road trip to discover what life is really about. Binary experiences the wonders of cartoons, pancakes, and even fluffy kittens, but when the giant monsters attack once more, she learns the most terrible lesson of all. The death of her fluffy kitten friend leaves Binary overwhelmingly sad, leading Carol to show her the most important thing of all about life. Gathering her friends and her sister Lauri-Ell, they take the powerful new person out… to DANCE!

THE CIRCLE OF LIFE

It’s really remarkable how powerful this comic ends up being, especially Binary’s inability to understand why the cat has stopped purring. The story is a successful done-in-one, but it ends with a shocking moment that will likely send Carol off on her next adventure (without Binary or Spectrum, but that’s another story). Ohta’s art is also fun, going from giant hybrid feline/lizard monsters to a roadside diner to a club in Vegas with aplomb. I have some issues with the coloring here and there, especially during the combat sequences, but it’s a minor complaint overall. The vivid body language and expressions of the characters allow us to keep track of who is who while Spider-Woman, Hazmat, and Carol’s friends are all out of uniform, even if it’s pretty obvious who the 7-foot-tall green one is.

BOTTOM LINE: I LOVE A GOOD “DAY IN THE LIFE” STORY

All in all, though, Captain Marvel #37 serves as the sought-after “great jumping-on point” of lore, giving us an insight into Captain Marvel’s world and supporting cast, introducing what might be a big ongoing threat, and what is clearly going to be an important plot moment, as well as teaching painful lessons in a sweet, entertaining way, earning 4 out of 5 stars overall. I feel bad that this book fell off my radar, but I think it’s back on the pull list permanently.