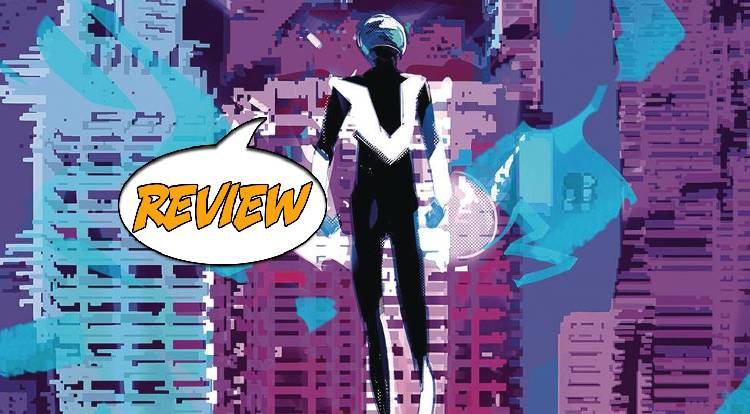 Sure, he’s met up with other superheroes and even saved the world, but Radiant Black still has some serious problems when it comes to public opinion. Your Major Spoilers review of Radiant Black #13 from Image Comics awaits!

Previously in Radiant Black: As the saying goes, when it rains supervillains, it pours supervillains. But even as Accel hunts Radiant Black for the ultimate recharge, Marshall’s got bigger things to worry about… like repairing his reputation.

And the old friend who just showed up in town.

After ten months, Nathan (the original bearer of the power of Radiant Black) is awake and out of the hospital, but his homecoming is darkened somewhat when the strange alien who empowered him tries to contact him upon his return home. He refuses the proverbial call, though, leaving him to deal with physical therapy. As for Radiant Black, Marshall’s return from his six-week absence (which felt like just a few hours in the strange sub-dimension of Radiants, where he went to regain Nathan’s essence back in issue #10) has left him short of funds, but he’s a clever young man. He’s been doing advertisements for various products, from skeevy VPNs to his favorite pizza place, and things are starting to turn around for our hero. He’s even figured out, thanks to the battle with Doppler, that it’s his own powers that are charging the bad guys’ technology, so when a new villain appears, he refuses to engage.

And that’s when Accel hits him where he lives.

MARSHALL IS A SCHMUCK

As of the end of this issue, things look bad for Radiant Black, in more ways than one. Given how well this book has subverted expectations for the first year, I don’t know if I can trust my instincts about what I think comes next, but… I think he’s not going anywhere good. Add in the poor decision to take sponsorships, and I’m really worried about our hero. That’s part of the beauty of Radiant Black, as the ongoing narrative has been realistic in all the best ways and surprising. Costa’s art feels a little looser in this issue than it did in previous ones, but that’s not necessarily a deal-breaker for me, it just makes a successful comic slightly less successful than the last few issues. The designs of Accell and the bad-guy-behind-the-bad-guys are excellent, as are the storytelling choices throughout the issue. Best of all, it’s a book that focuses much more on the effects that the powers are having on the cast and their families than the big fistfights, and I really like that.

If Radiant Black #13 were said to have a flaw, it’s only that I suspect I know where it’s going to go from here, but with a book this well-drawn and engaging, that’s hardly the end of the world, leaving this issue with a better-than-average 3.5 out of 5 stars overall. There will clearly be big changes going into the second year, and this comic book makes a great case for why you should start picking up RB’s adventures.

We start to get some explanation for the rush of villains, and Marshall hits a new low, while the ending makes it clear that Radiant Black's story isn't gonna get more predictable in its second year.