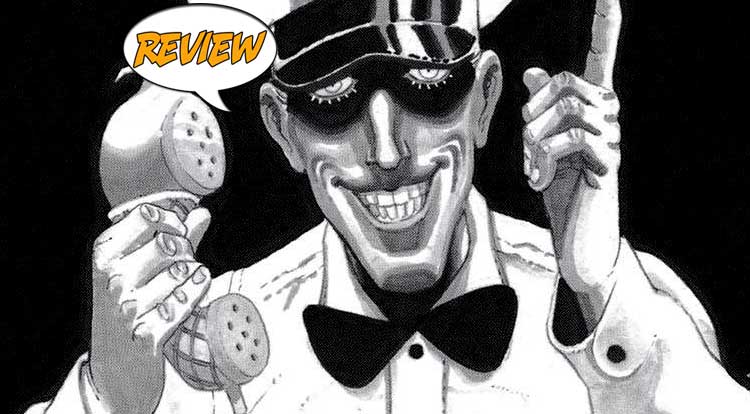 Time to dig deep and pitch in all you can.  The life you save might be Jerry’s…  Your Major Spoilers review of Ice Cream Man #24 from DC Comics awaits!

Previously in Ice Cream Man:  We’ll be up all night, trying to raise $3.99 to save this guy’s life.

How much will you give?

“YOU’VE GOT A ROTTEN TOOTH.”

His name is jerry.  His wife is divorcing him, his body is breaking down and his boss is watching closely for him to make any mistake.  It’s a terrible situation, made even more unnerving by the presence of the Ice Cream Man between the gutters, hosting a telethon with a bank of Lily (remember her from issue #15?) manning the phone, trying without success to raise money to save Jerry’s life.  Even the commercial breaks are creepy, each one poking fun at another aspect of life in the 21st century, whether it be self-medication, eating your feelings or just plain failing to cope with reality.  Everybody around Jerry seems to know about the telethon, but as things continue, no one donates so much as a cent.  That’s when the Ice Cream Man looks the reader right in the eye, offering to donate the money himself if we, the reader, put down the book and stop reading right now.

As someone getting along in years, the premise of Ice Cream Man #24 is absolutely chilling.  I don’t know if W. Maxwell Prince is at man nearing fifty or not, but if he’s not, he’s managed to capture the zeitgeist of it perfect.  Jerry’s dilemma is incredibly mundane and somehow cosmic in its scale, and Morazzo’s art gives it just the right tinge of despair.  (The boiled lobster ad will haunt me, no kidding.)  Even though it’s not photo-realistic, the art feels absolutely human, and the subtlety with which Jerry is shown wasting away is impressive.  It’d be easy to go overboard, but things remain perfectly in balance until… Well, until they’re not anymore.  Prince’s story manages to break the fourth wall in ways that don’t feel self-conscious, instead drawing the reader in and making it all feel like a slightly-heightened reality, making the ending that much more cruel when I inevitably turned the page.

BOTTOM LINE: A MEAN LITTLE COMIC, IN ALL THE BEST WAYS

Horror is hard, especially in today’s post-modern storytelling world, but Ice Cream Man #24 makes a perfect little poison pill, taking it’s dark premise and wringing humor, pathos and some genuine human emotion from it before taking it to the obvious, terrible conclusion, and sticking the landing for 5 out of 5 stars overall.  Sensitive readers may want to take a pass, as the subject matter is quite disturbing, but this is one of my favorite issues of this excellent series to date.

Middle-age is terrifying and this comic book has teeth, my friends.