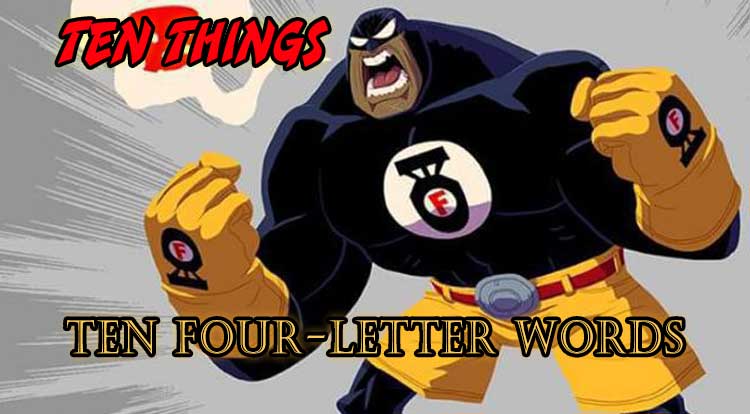 Whooshman-Bicarbonate Films, in conjunction with An Amateur Comics Historian and being incredibly literal and not actually cursing, which is probably some sort of bait-and-switch, Presents: A member of a group of weirdos assembled by Doctor Polaris to tackle the Green Lantern Corps, Truk’s real power is in his momentum: He starts out slow, but gains speed and power as he goes, allowing him to knock down even the most willful of Lanterns. In fact, he is Dr. Ub’x, an evil anthropomorphic chipmunk, wearing a magical disguise. One of Steve Englehart’s most glorious gimmicked villains, he is silly, but also makes perfect sense. After all, what’s more terrifying to a tiny rodent than heavy traffic? The daughter of Spawn’s ex-wife, Cyan Fitzgerald was trained by Zealot of the WildCATs to be a Coda assassin, at least in one dystopian alternate future. In this world, she is sent back in time and tasked with killing Spawn, who has always looked after her as the daughter that he never had, in order to keep him from becoming an evil dictator in her time. Since most of her appearances have her as a tiny, wide-eyed toddler, so seeing her dressed as a disco-bondage-hockey-goalie is pretty shocking (and not just because the costume is just plain ugly.) In an alternate reality where Superman didn’t become a hero, Halo (real name unknown, but she is presumable bonded with the same alien Aurakle that empowered the prime Halo) joined the Justice League under the command of Martian Manhunter. That world, seen in ‘Justice League: The Nail’ and its sequel, which Rodrigo calls “Another The Nail”, doesn’t do so well without a Man of Steel, but Halo survives the trials to become a full-fledged member of the JLA, something her Prime-Earth counterpart never did. A member of the Great Society, a Justice League analogue existing on Marvel Earth-4290001, The Norn (real name unrevealed) wears the Helmet of the Black Priests, which empowers him with magical might. His world was destroyed by The Illuminati (specifically by Namor The Sub-Mariner, in case you’re wondering), and his magical artifacts taken into custody by Doctor Strange. He’s pretty clearly a pastiche of DC’s Doctor Fate, and his helmet design is almost better than the original. A spy for hire, real name classified, he has the incredibly useful power to absorb and control the printed word in all its forms. He can literally steal the text from a secret document, then transfer it all to to a screen or piece of paper, preferably in the hands of the highest bidder. The Word isn’t not the greatest fighter, and tends to avoid physical combat, but his ability to walk on walls comes in very handy in his (very literal) intelligence gathering activities. Able to teleport himself and his teammates, Port (real name unrevealed) was already an established and popular hero before joining Legion X-1, a government-sponsored black ops team. Their scope and mandate were never entirely clear, and while they did cross swords with the vigilante murderer Grips, but their most common foe was their sister team Legion X-II. They were ahead of their time, presaging groups like Youngblood and the modern penchant for superheroes mostly fighting one another rather than anybody evil. A doctor by trade, Avery Cunningham was given the ability to phase in and out of sync with reality due to a freak accident involving an MRI. Skilled in the medical as well as martial arts, she can make herself intangible or will her fists to greater density for more punching power. Faze is active in her community not only as a costumed hero, but as an activist, focusing on corruption in government and in the private sector. She also has a friendly rivalry with fellow hero Wildfire, challenging him to be more proactive in the community and less focused on headlines. Founder and financial backer of The Pride, an alliance of LGBTQIA+ superheroes, Brian Wilde may lack super-powers, but he makes up for it in sheer grit. Indeed, he shows the same bravery out of costume as in it, going public not only with his identity as the renowned captain of industry, but as a gay man, outing himself all at once on pretty much every level. He’s probably the most traditional superhero in The Pride, a scarier Batman.

What, wouldn’t you be more afraid of a wolf than of a bat? A student at the the Pan-Asian School for the Unusually Gifted run by Jimmy Woo and Sanjar Javeed in the Marvel Universe, Shri was chosen as one of the representatives to the Contest of Champions, facing off with representatives of the Avengers Academy, the Jean Grey School, Braddock Academy, the Wakandan School for Alternative Studies and other superhuman training facilities. Their competition was interrupted by the arrival of Thanos, forcing the young heroes into battle. Given her ability to generate energy weapons and the whole “being a reincarnated god” thing, Shri acquitted herself quite well. A refugee from Earth-K, currently living with other super-refugees on Earth-Z, Scarlet Davis was the first Black woman president of the United States on her world. Gifted with vast psionic and clairvoyant powers, she allies with other former POTUSes as part of the Crisis Command, working to preserve the last remaining Earth from impending dooms of all sizes. Given that their latest case has them investigating the death of the universal concept of Empathy itself, things have gotten a little bit out of hand, but Seer and her friends feel up to the task.

Once again, this week’s topic, Ten Four-Letter Words is all me, but feel free to follow along @MightyKingCobra to suggest your own! There’s always more Ten Things madness on my Twitter or check out the full Twitter archive here! As with any set of like items, these aren’t meant to be hard and fast or absolutely complete, if only because words can be short. Either way, the comments section is below for just such an emergency, but, as always: Please, no wagering!