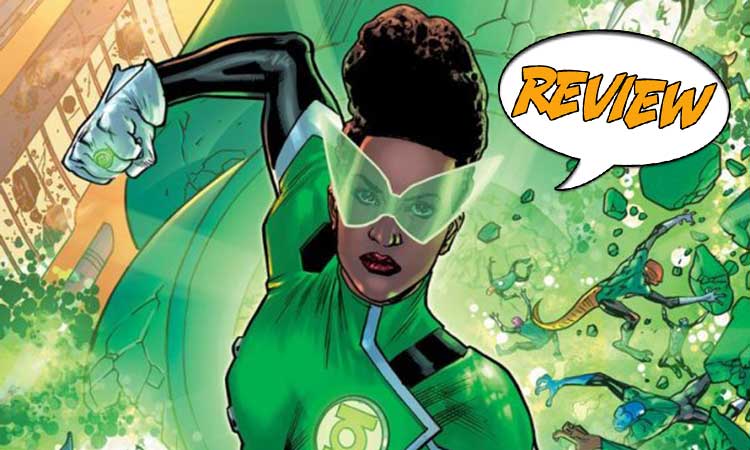 In the face of tragedy, the Green Lantern Corps looks to horizon and plot a new course for their ranks.  But someone wants to make sure that future never comes to pass.  Your Major Spoilers review of Green Lantern #2, awaits!

Previously in Green Lantern: A Guardian of the Universe lies dead, and the universe teeters on the brink of war. As the summit of the United Planets and the Green Lantern Corps falls into chaos, an even bigger threat looms.

Green Lantern #2 opens with John Stewart filling in all the Green Lanterns about how a Guardian was murdered by terrorists and that Oa had been accepted into the United Planets. This leads to the surviving Guardians to announce that there has been a massive shift in how the corps will operate going forward.  Half of the sectors that the Green Lanterns had patrolled will be turned over to the United Planets to watch over, with those who had previously been assigned to them being shifted around to other duties, one of which is acting as backup for the United Planets, while the others will venture past newly formed barriers at the edge of the universe to see what lies beyond led by John Stewart.  Other than that the remaining Earth lanterns are assigned to watch The Crux Worlds, with Teen Lantern being assigned to remain on Oa with Simon Baz. As everyone prepares to embark though, the central battery explodes.

ANOTHER SWING AT AN OLD GREEN LANTERN TROPE

Green Lantern #2 is an interesting but imperfect issue.  There’s a lot of time spent establishing a new status quo for the Green Lanterns and as an added bonus, these changes are actually intriguing and not just a meaningless shift to create drama.  Also, everyone gets involved.  With the exception of Jessica Cruz, all the human Green Lanterns show up here and we get to see their various personalities on display.  It really comes off as a new path for a portion of the DC Universe that had been dogged by repetitive stories dependent on all the various colored corps and shallow tension between them.  But, all that potential is then done away with the central battery exploding.  While it’s a shocking moment and certainly has potential of its own, it’s a plot twist we’ve seen before, time and time again in Green Lantern books.  It feels like every other month someone is finding a way to depower the rings and force them to win the day without their defining feature.

Just wanted to take a moment to give kudos to the various iterations on the Green Lantern uniform we see here.  From the formal wear, to the funeral garb, there’s some nice design work here that adds a bit of fashion to the corps.

THE BOTTOM LINE:  ENOUGH TO JUSTIFY ANOTHER ISSUE

The way that Green Lantern #2 leaves things, is not great.  It goes back to a well that’s been tapped too many times.  But, there’s enough good and clever setup before that that it seems like things could really go either way come the next issue.  Green Lantern #2 earns 3.5 out of 5 stars.

Green Lantern #2 builds itself up with the promise of shaking things up and taking the Green Lantern Corps in a new direction, it then fumbles this by falling back on an old story beat that’s been used just too many times.