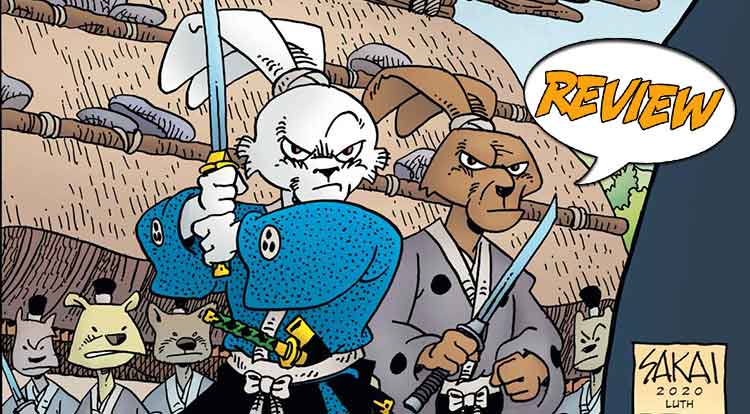 Usagi and Kenichi find themselves surrounded by assassins. Will Mariko be able to find help and get back to the village in time? Find out in Usagi Yojimbo #14 from IDW Publishing!

Previously in Usagi Yojimbo: Usagi’s travels draw him back to his home village where, a long time ago, his Lord Mifune was defeated by Lord Hijiki. There, he discovers it has been taken over by assassins who plan to kill the Shogun’s emissary. Usagi is discovered, but before he can thwart them, they imprison the entire village in the storehouse with orders to burn it at a moment’s notice. Usagi releases his old friends Kenichi and Mariko, but the few of them cannot be enough to stop the assassins!

THE MOMENT OF TRUTH ARRIVES

As Usagi Yojimbo #14 opens, he and Kenichi have been caught by the assassins who are about to put a torch to the storehouse. Kato give the command – and the torchbearer is brought down by an arrow. Up on the roof of a nearby building is Jotaro, Kenichi’s son! But he was away for training with the same master who taught Usagi. And Katsuichi-Sensei is here too, as well as Mariko (who praises Jotaro’s shot and then tells him to stay up where it is safe).

Infuriated, Kato now gives the order to kill Usagi and Kenichi and the fight starts. The assassins don’t know quite who they’re up against. Usagi manages to get a sword, which helps. But even as he realizes that there are too many for the two of them, Katsuichi steps in and Jotaro shoots another assassin.

Mariko realizes they still need more help and races to the storehouse. An assassin tries to stop her, and again Jotaro steps up. It becomes a charming joke that Jotaro is much better with a bow than Usagi ever was. Mariko frees the villagers and urges them to take arms with anything they can find. With everyone working together, the tide is swiftly turned and soon Usagi confronts Kato, demanding the return of his swords. It is a classic showdown, and it is exciting.

And then the Emissary arrives. Any assassins who survived flee. The Emissary praises Kenichi’s work as headman of the village. But the assassins were wearing the Mifune Mon, so Lork Hikiji’s men will be hunting them down. This means danger for Usgai, who was hidden in Kenichi’s home, but Kenichi has realized that he and Usagi do not have to be adversaries.

Usagi must leave; the area is not safe for him and he doesn’t want to bring any more trouble to Mariko and her family. He can travel for a while with Jotaro and the Sensei, and on that trip Jotaro is excited to hear the tales of Usagi’s adventures (told off panel; we hear only a one-sentence summary to remind us of the prior arcs). But eventually they too must part ways.

LIVELY AND WELL SET UP

Usagi Yojimbo #14 is a wonderfully paced book. The art is a little loose and very lively. This is a big fight with several surprises coming onto the scene. Each one is constructed well with timing that fits the pages like a glove. Jotaro’s reveal comes at the bottom of a page and leads to Katsuichi’s arrival at the top of the next. The fight is beautifully choreographed. While we may well expect Usagi to win, in the end it isn’t just him; it is the village working together, and it is through the art that we see this victory being forged.

I love Jotaro. Clearly, he is young, but he is also training hard. He really helps save the day, and I enjoy seeing how he is such a blend of seriousness and excitement. I also liked all the scenes where Mariko praises him for his good work and then, like the fond mother she is, urges him to get someplace safe. Jotaro may be young, but he is growing up.

Usagi Yojimbo #14 is the end of an arc and it definitely does not disappoint. It is a terrific blend of excitement and a sort of wistfulness. Usagi is paying his respects to people who were important to him in the past, and he is reminded yet again that we can’t turn back the clock.

Usagi and Kenichi may be adversaries, but today they fight on the same side.