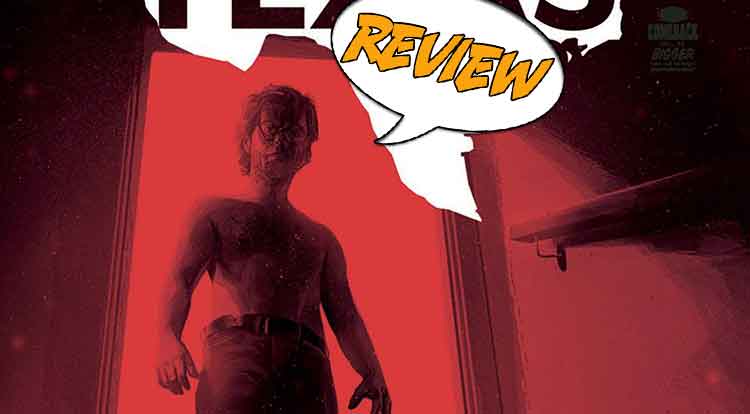 In THAT TEXAS BLOOD #5, Randy dreams he’s drowning in blood, though not his blood, as he deals with something he can’t take back, while Sheriff Joe Bob shows a new recruit the dark underside of his county.  As the pressure and earth toll mounts, can Randy get out from under the chaos he is causing?  Find out in your next mighty Major Spoilers review!

Previously in THAT TEXAS BLOOD: Randy fled his home in Texas, escaping an evil family and his worse brother, Travis.  But now, Travis is dead, and the pull of familial ties has dragged Randy home, where a hostile town, remembering youthful excesses, turns its back on.  But Sheriff Joe Bob is on the case, and a man named Kuttner is in the frame.  But when Randy takes the law into his own hands, do we see why this title is called THAT TEXAS BLOOD…

THE BLOOD OF THE LAMB

THAT TEXAS BLOOD #5 starts and ends with images of Randy drowning in blood.  In between, we have the aftershocks of the previous issue, as an encounter at his home ended violently.  There’s the distinct feeling throughout this issue of a rat caught in a trap.  No matter how much Randy tries to chew off his leg, he’s tied to the body lying in the living room of his old home, with his girlfriend knocking on the front door demanding to speak with him.  The way the writer Chris Condon frames Randy’s predicament, with the mordant narration contrasting Randy’s idealized version of himself, with the bloody consequences lying on the floor, is a masterclass in writing and tension building.

There’s something deeply fascinating about the way noir examines the psychological make up of criminals, and how they deal with their crimes.  Randy fled his home for a better life, but as the narration pointedly comments, underneath the nice clothes, the office job, the haircut and expensive glasses, he’s just an animal.  And not only is the narration telling us this about Randy, it’s also telling us about us.  We, the audience, are animals too, when push comes to shove.  A lot of the power of THAT TEXAS BLOOD #5 is Randy realising with horror that for all his efforts to escape his old town, he’s never really left.

Elsewhere, Sheriff Joe Bob and new hire Deputy Flores take a ride out to interview rancher Teddy, who very definitely was involved in Randy’s brother’s death.  The investigation putters along, as Joe Bob puts on his ‘aw shucks’ routine, while Flores demonstrates she’s a take no prisoners kind of police officer.  If THAT TEXAS BLOOD has a slight weakness, it is the up to this point slight roles for female characters.  Randy’s old girlfriend is more victim than character, while his current girlfriend gets treated horribly by him in this issue.  It is great, then, to see the creative team inserting a stronger female character, one of color to boot.  Fingers crossed she sees even more page time in future issues.

Jacob Philips’ artwork is its usual exemplary self.  There’s an emphasis here on depicting Randy’s mental state, opening and closing with images of him floating then drowning in blood.  Along the way, we see the toll of what he has done has had on him, with glaring eyes and twisted lips demonstrating that this is a man on the edge of a psychological precipice.  The real beauty and power of the comics genre is never more evident than when the writer and artist are completely in sync, and that is never more on display than in THAT TEXAS BLOOD #5.

BOTTOM LINE:  THAT TEXAS BLOOD #5 is yet another strong issue in a strong series.

The psychological examination of Randy, as he cleans up after his crime, is nothing short of compelling, and well worth the price of the issue alone.  A series like this isn’t all about fist fights and gun shootouts, as noir can sometimes be, but is instead an examination of what makes a person tick, and what sorts of pressures can be applied to break them.

With blood on his hands, and his girlfriend knocking at the door, Randy comes closest to taking a final break from reality. The pressure ticks up to almost intolerable levels in THAT TEXAS BLOOD #5, and then blows straight through them, as that body Randy dumped in the cellar starts to moan and groan...