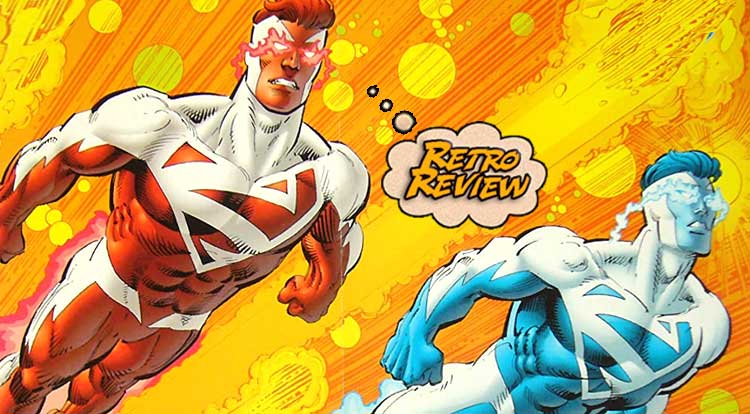 In comics, everything old is new again, so a Silver Age story gets a very 90s twist.  Your Major Spoilers (Retro) Review of Superman Red/Superman Blue #1 from DC Comics awaits! Previously in Superman Red/Superman Blue:  When the Final Night crisis threatened to extinguish Earth’s sun, the solar-powered Superman found his powers dwindling, but even after the Sun was reignited, he found his powers dormant.  Through a complicated series of events (there were, after all, four Super-titles, with four different creative teams, making for some fragmented storytelling) he developed energy powers allowing him to channel and transform into electricity, turn intangible and even manipulate computers and the information stored within.  With the help of a new containment suit from STAR Labs, Superman is slowly coming to terms with his new powers, when an emergency call comes from Stryker’s Island prison: The Toyman isn’t moving! The Man of Steel– er, Voltage nearly gets blown to smithereens, but Toyman has made good on his escape.  He disguises himself as a street corner Santa, but the story shows him talking to himself in a very disturbing manner.  Making his way through the city, he finds a Toy Store and takes a particular doll from his sack of presents.  As the various vintage toys fly together into a vaguely humanoid form, we realize that he’s been talking to…  Hank Henshaw, the Cyborg Superman!  Henshaw goes on the attack, and Superman responds to the threat, only to get surprised and banjaxed by the villain. This special issue actually continues a lot of the subplots of the four main Super-titles, which means that we get bits of Lex Luthor, Jimmy Olsen, the alien Skorn and other moments that seem wildly out of place here.  Not only that, but the various art teams all have a hand in the issue, meaning that the visuals go back and forth every few pages as different teams tag in.  It makes for a scattershot approach, even with Paul Ryan and Dan Jurgens clean lines in the mix.  As for the evil Henshaw, his device isn’t just to capture Superman, it’s designed to kill him by dispersing and destroying his energy. The Toyman is shocked to find his escape blocked by a fully-powered and not-at-all dead Superman, who remarks that he feels better than ever.  Of course, saving Lois from the evil Santa-impersonator means that Cyborg Superman is going to get away clean with his evil plan… until he, too is confronted by Superman?  The red-costumed Man of Tomorrow wonders about his color-shift, but takes the opportunity to throw Henshaw into the sun, brashly threatening to kill him.  Henshaw shuts down, and Superman takes him to Project Cadmus for safe-keeping. Toyman also gives up, and Superman returns him to Stryker’s Island for safe-keeping, with neither one aware of what the other is up to. This issue ends on something of a cliffhanger, albeit a kind of unsatisfying one, as Clark Kent approaches the Daily Planet from the roof entrance, while Clark Kent approaches the Daily Planet from the street-level, each one happy to reunite with their wife, Lois.  Superman Red/Superman Blue #1 is a really busy comic that continues the storylines of FOUR books, features ten artists and doesn’t really make a lot of sense out of its time and place, leading to a confused 2.5 out of 5 stars overall.  Because of the heavily-serialized late 90s DC editorial stance, the compelling premise is little more than a teaser here, and you’d have to read fifty or sixty subsequent comic book issues to get anything resembling satisfaction.  About half of the art is pretty great, though.

An interesting idea that takes a lot to set up, with tons of unrelated moments that don't really seem to belong if you weren't reading all the Super-books circa 1998, ending with an unsatisfying tease for what comes next.