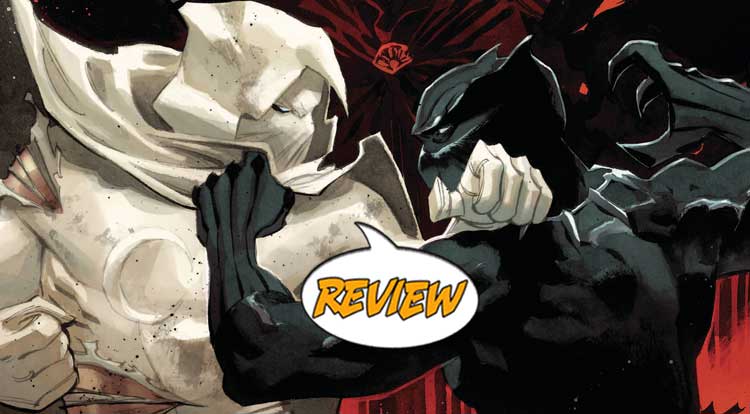 Moon Knight versus the Black Panther… for the fate of reality.  Your Major Spoilers review of Avengers #36 from Marvel Comics awaits!

Previously in Avengers: Khonshu  has sent his fist, the hero called Moon Knight to gather the powers of the Marvel Universe to stop an unstoppable foe.  Though he has the Iron Fist, the Eye of Agamotto and Ghost Rider’s Hellcharger, he has failed to get the Starbrand and the powers of the Black Panther.

So, Black Panther has brought the power to him…

“TODAY, I DROVE A FLAMING CAR THROUGH SPACE.”

Not so long ago, Marc Spector used the stolen power of Ghost Rider to actually travel to the moon, where he met The Unseen (the artist formerly known as Nick Fury), who had some advice for him: If you want to beat a literal god, you’re not going to do it with just another god.  Back on Earth, some time later, The Black Panther has arrived at Khonshu’s sanctuary, ready to free the powers stolen by Khonshu or die trying.  When the Moon God tries to defeat him with Mjolnir, the hammer revolts against his control, and we see that the powers of Thor and the Black Panther are well acquainted, thanks to the 1,000,000 BC Avengers conceit that underlies this entire volume.  That also gives the Panther the edge to cause the other stolen powers to try and pull away from Khonshu, as he rightfully points out that stealing everyone’s ability to defend themselves against the hordes of Mephistos only leaves everyone powerless.  Panther’s skill and power overcomes even Moon Knight’s fury, but as Marc Spector falls, he reveals what Nick Fury told him… by calling upon the power of The Phoenix!

THE MISSING POWER ACCOUNTED FOR

So, I don’t know if this is building to the end of Aaron’s Avengers, but I have to admit, I’m sort of liking how this is all playing together.  I usually don’t enjoy stories that try TOO hard to tie everything together, but this story has made it clear that the various powers are still unique, even as they’re arrayed together here.  Garron’s art is pretty excellent as well, with Moon Knight looking really amazing throughout the issue, and the contrasty battle of the warrior in white and the warrior in ebony really popping off the page.  There’s also a great page of Captain America, Blade and She-Hulk rushing into battle that is almost poster-worthy, making for a memorable issue.  There are some pages where the coloring is actually a bit TOO intense, almost garish, especially during the Moon Knight battle, but even that is a minor concern in an issue that looks and reads this well.

The buildup here is really maddening, but in a way that makes me desperate to see the next chapter of this story, leaving Avengers #36 with a well-deserved 4 out of 5 stars overall.  If you’re the kind of person who sees the Marvel Universe as having tiers, you’ll likely be mad about Moon Knight defeating Thor, Doctor Strange and Iron Fist, but if you’re willing to go along for the ride, it’s a really strong narrative with impressive art, and it makes me want to see what comes next.  What more can you ask from a comic booK?

This issue keeps building and building, but it manages to swerve readers as to WHAT it's building to, and that ending is... shocking.