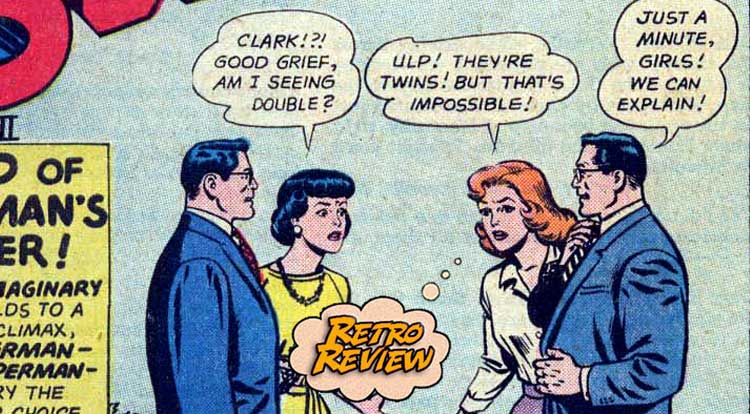 Some people complain that Superman is too powerful and could solve any problem in seconds…  but what happens when he DOES?  Your Major Spoilers (Retro) Review of Superman #162 awaits! Previously in Superman:   Everyone knows the story of Kal-El, rocketed from the dying planet Krypton by his scientist father, raised by farmers in the Midwest only to discover that his alien heritage gives him phenomenal physical and mental abilities.  But even with his vast array of powers, there are a number of problems that Superman cannot overcome, problems like the restoration of Kandor, the neutralization of Kryptonite and an actual solution to crime.  As our story begins, the Kryptonians of Kandor rather callously call him on the carpet for these failiures, giving him an ultimatum: Fix these problems or switch places with one of them who will replace him as Superman.  There’s only one possible solution: His new brain-evolution machine! Thanks to the machine’s power source (all known forms of Kryptonite, including Red, which has unexpected random transformational effects on Kryptonians), Superman is not only gifted with enhanced intellect, but split in two, with helpful color-coordinated uniforms to tell them apart.  Not only are they able to reverse-engineer Brainiac’s technology to enlarge Kandor, they create a core of “Hyper-Magneton” that draws all the Kryptonite in the universe back together into a planet! Curt Swan’s art throughout this legendary story is wonderful, with even the identically-garbed Superman Emergency Squad having tons of personality and expression as they rebuild their homeworld, dubbing the recreated planet New Krypton.  After seeing how easily Superman-Red and Superman-Blue created a home for the Kandorians, Lori Lemaris calls from Atlantis and requests that they do the same for them, as they’re tired of being treated as freaks on Earth, even though that hasn’t really happened in my memory.  Usin g their heat vision in concert with Krypto and Supergirl, they melt the icecaps of  the planet they created as a memorial of Krypton, flooding that world as a new Atlantean planet.  Then they set about creating “hypno-rays” that will negate all evil thoughts from the mind of all criminals! A little bit of 1963 bias creeps into this story, as the “criminals” who give up their evil ways include Nikita Khrushchev and Fidel Castro, but even that doesn’t damage this story’s gentle optimism, as Luthor, Brainiac and the Phantom Zone criminals all turn their evil lives around and contribute to society in meaningful ways.  The Zoners set off for New Krypton, and Supergirl tearfully goes with them, giving up her hero life to live on the world she misses so much.  Even Mxyzptlk goes straight, but this leaves the Supermen with some extra time on their hands, enough time to confront the most difficult question of them all: Their love Iives! The Supermen finally come clean to their chosen partners, proposing to Lois and Lana, who decide to make it a dual wedding.  Lois’ little sister Lucy even agrees to marry Jimmy Olsen, making for a sweet triple-wedding ceremony, after which Superman-Red realizes that he, too, wants to go home to New Krypton with his new wife, his dog and Super-Horse, for some reason.  Superman-Blue prepares to retire, but Perry White wonders about natural disasters and other jobs for Superman in the new crimeless world order. It’s a big ol’ happy ending for Superman (both of him) and one of the most memorable comics of the era, so much so that it has been maintained throughout multiple universal retcons.  (When I last checked, it was still a part of the greater multiverse, designated as happening on Earth-162.)  Superman #162 is one of those comics whose weaknesses are almost completely hidden by the cleverness of the script and its quiet appreciation of the nigh-omnipotent Kryptonian, with Curt Swan’s art delivering on the emotional moments and a whole-hearted embracing of its goony premise making for a winner, earning 5 out of 5 stars overall.  If you’ve never read this one, I recommend finding it for yourself.  It’s been collected several times, but the original issue has a Super-Turtle strip, so I’d find that one, if you can.

There's a reason why this story keeps getting referenced, my friends. It's the standard-bearer for creative, goofy, Silver Age fun.