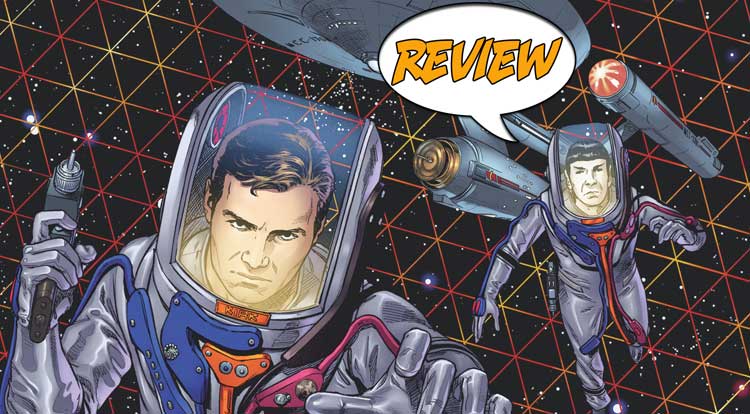 The Tholian Web is closing on the Enterprise, and Kirk has only minutes to save his ship and crew.  Your Major Spoilers review of Star Trek: Year Five #8 from IDW Publishing awaits! Previously in Star Trek: Year Five: As a fleet of Tholian vessels closes in, Kirk and the rest of the crew struggle to free the Enterprise from the Tholian Web before it’s too late.  And with the destruction of the ship hanging in the balance, Bright Eyes will have to make a choice between their human friends or going home.

As we open, Commander Spock is in command of the USS Enterprise, as Kirk, Sulu and an alien called Ayal are in open space, preparing to plant a bomb that will (theoretically) blow open the Tholian Web and allow the ship to escape.  Unforunately, Spock is compromised, having mind-melded with a Tholian called Bright Eyes, who is now panicking from the combined emotion of their situations.  With the Enterprise lacking power, Doctor McCoy is force dto watch as the Tholian rips through the hull of the ship (and it’s Nurse Chapel who actually saves the day, forcing him to help her close the doors) as Spock realizes what the alien is doing.  Driven by Spock’s shared thoughs, the alien leaps out into space and saves Kirk seconds before the explosion would have killed him, but as the issue ends the Captain is still in critical condition from radiation exposure.

Also, Sulu gets a big ol’ kiss (and says “Oh, my”, which is almost but not quite a step too far.)

The first impressive thing about this comic is the art, with the first page showing Spock in the center chair (and silently but clearly conveying that something is wrong with him) as Chekhov and Uhura report in.  They’re both seen as inset heads, but it’s a perfect layout, followed by some really impressive scenes in Sickbay and Engineering that show off the second impressive part of this comic: They’ve done their homework on The Original Series. The ship looks right, the space-suits and phaser rifles on the cover are correct, all the likenesses are well-done.  They even look good alongside Ayal, an alien who seems to be part Betta fish, which is often the hard part of a Star Trek comic.  Storywise, this feels like both an ending and a middle chapter, and its story of the as-yet-unseen final year of the Enterprise’s mission is compelling.  My only complaint is that so much of this is entirely familiar turf, from the Tholians to the secret manipulator of events revealed at the end.  I understand that it’s a series aimed at hardcore fans, but I’m always bothered when the story seems like it doesn’t want to break any new ground.

BOTTOM LINE: THAT LAST PAGE, THOUGH

Given that last page Gary Seven appearance, though, it looks like they’re willing to explain some things that Season 3 didn’t or couldn’t, and I’m actually into all the references and familiar moments in this book, which means that they haven’t quite turned the corner into TOO much reference.  Star Trek: Year Five #8 ends with a stiff cliffhanger, gives us excitement, a couple of cool Spock moments, romance for Sulu and lets McCoy actually curse out loud, earning a combined 4 out of 5 stars overall.  If you’ve never read a Star Trek comic or seen the old-school show, you might be lost here, but those who are looking for more TOS will be more than satisfied by this series.

Sharp dialogue, a tight plot and a lot of Star Trek lore combine with excellent art to make this a good one. Especially for Hikaru Sulu...