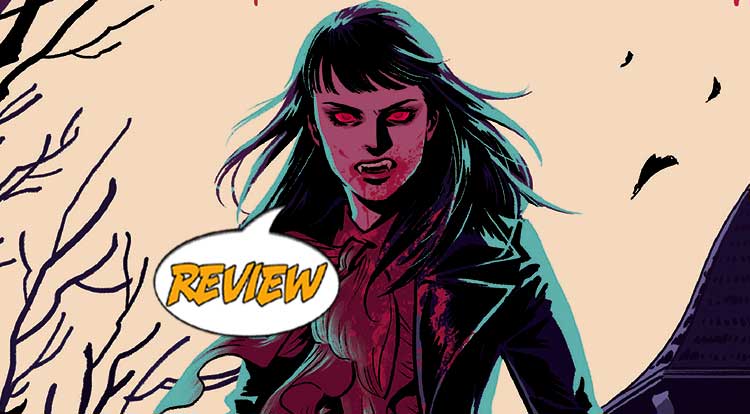 Vampironica has learned the secret of the Lodge family line… and she is NOT happy about it.  Your Major Spoilers review of Vampironica: New Blood #1 from Archie Comics awaits! Previously in Vampironica: New Blood:  Riverdale’s own bombshell bloodsucker is back! After her epic clash with a werewolf Jughead, Veronica returns to her own universe, still a vampire. She’s not the same, and she knows it. And now she needs answers. But she may not be ready for what she’s about to discover!

Having returned home to her own dimension after being dragged off into a war of supernatural beings, Vampironica opens her eyes not to see a werewolf… but Hot Dog.  Archie is surprised to see her back, as she and many other Riverdale locals (all secretly vampires) disappeared entirely, but only she has returned,  And she’s more than a little freaked out about the highly charged kiss she shared with Jughead in that other world.  Of course, there are other new factors in play as Fangs Fogerty (one of the kids from the ‘Riverdale’ TV show, apparently?) arrives in town with some ominous warnings about secrets in Riverdale, taunting Sheriff Keller with something he knows.  Likewise, the Sheriff’s son Kevin really wants to talk to Ronnie, but she’s busy with the affectinos of Archie Andrews and the research that she’s dispatched Dilton to do.  It’s a real shame, too, as the final page reveals that she’s not the only Riverdale regular who has a taste for blood… and it’s someone whose name is in this very paragraph!

NOT SURE HOW IT FEEL ABOUT THIS, BUT IT LOOKS NICE

The biggest issue that I have with this comic comes in how much of it is devoted to Vampironica’s recounting of what has come before, worrying about her heritage and of course, the dark-and-brooding nonsense of our pal Fangs.  I’m not one who hates the ‘Riverdale’ TV show, but I’m not entirely sure how I feel about it being the major touchstone her for dialogue and tone, as it makes for some… questionable dialogue moments and character beats.  I’m much happier with the art here, as it manages to keep the darkness front and center without making the images muddy or overly obscured, and every face is full of expression and humanity, even when they look remarkably familiar.  The questions of what Riverdale will be like with a large chunk of the population missing are interesting, and the interactions betwee Ronnie and her shocked parents, forced to explain that they’re a family not of rich carpetbaggers but of vampires is worth your time.

The last page reveal of the OTHER vampire in our cast is also a moment that I’m interested in, given the history between them and mainstream Ms. Lodge, so Vampironica: New Blood #1 is a better-than-average affair, with the clean, moody art making up for a number of minor story and tonal miscues for 3 out of 5 stars overall.  I’ll also be interested in seeing if Vampironica’s attraction to Jughead goes anywhere, because that’s some uncharted Archie Comics territory.

The main character has potential, but there's a lot of wool-gathering thought balloons and a bit too much maneuvering for my tastes. The art's pretty lovely, though.