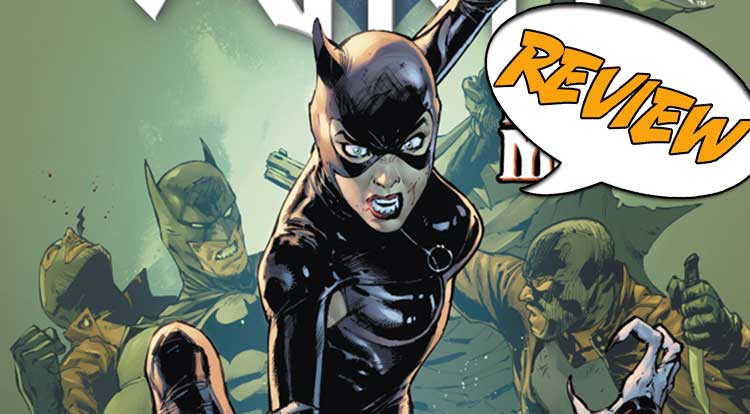 Recuperating after earlier events, and coming to terms with Catwoman leaving him at the altar, Batman examines his life.  But he isn’t alone.  With Catwoman along for the ride, things get heated, in more ways than one!  What happens when Batman and Catwoman find themselves on a tropical island with little to do, or wear?  Find out in our Major Spoilers review! Previously in Batman: Bane rules Gotham City with a fist of iron.  Batman and Catwoman have fled to sunnier climes, seeking to regroup.  After initially denying their feelings to one another in the aftermath of the wedding that wasn’t, Bruce and Selina rediscover their feelings, and the reason why she ran, and why he let her.  Now, hidden in their tropical paradise, Batman and Catwoman plot their way to retaking Gotham, and also discovering what the future may hold for them.

Batman #79 proves that comics are much more than people in tights beating each other up.  Comics can also be heartfelt examinations of what makes people tick, and why love will always endure.
Batman #79 is a perfect blend of introspection and action, character and excitement.  Just because Bruce and Selina spend most of the issue talking about each other to each other, doesn’t mean that writer Tom King has written a boring book.  Far from it – this latest issue maybe the finest traditional superhero comic book I’ve read in 2019.

Famously, Batman and Catwoman almost, but not quite, got married.  In the aftermath of the fallout, Bane has conquered Gotham City, instituting a reign of terror that, unsurprisingly, has the stamp of approval from the President.  Having fled Gotham in an effort to find a way of defeating Bane, Batman and Catwoman plot to steal the Venom serum from Magpie and use it to retake their city.

Batman #79 is much more than the barebones plot described above.  It, along with the previous issue, is essentially one long dialogue between the two main characters, as they bicker over the facts of their initial meeting and tentatively examine their failed effort at getting married as they look at each other, and themselves, in the light of that event.

Characters talking a whole lot can be a massive drag on a story, if you expect that story to be one long punching festival.  But Batman #79 is far from boring, even if the fighting is a limited part of events.  Tom King has crafted an issue that is enthralling, as the central interaction in the story is captivating.  All of this introspection, the bickering, the back and forth – it’s fascinating and hugely entertaining, and even better, it feels so fresh.   This is what a modern relationship reads like in prose – the give and take, the sense that equals are sparring with one another, not to hurt or cause harm, but to get to the heart of what makes each one tick, and why they are so attracted to each other.

And make no mistake, this is a sexy and sexual book.  Not simply because Clay Mann’s pencils, and his inking with Seth Mann, create a pair of characters amazing to look at.  It’s also because King has created such startling characters, very much the equal of one another, who treat each other with respect, who live and breathe each other’s lives, who are willing to expose their deepest wishes and desires.  On the page, Batman and Catwoman; Bruce and Selina, are simply some of the most vibrant creations in comics today.  It doesn’t hurt that both of them look absolutely ripped, or that Catwoman may be the hottest woman in superhero comics.  There should be nothing wrong with acknowledging that – her power and strength comes from Catwoman knowing exactly who she is, and that the artists have understood that, and put that power and strength on the page.

WRITE IT AND THEY WILL COME

King’s pacing through this issue is perfect as well.  We briefly flash back to the earliest encounter between Bruce and Selina, before they donned their costumes.  It’s that encounter, and the discussion it provokes in Batman #79, that gives the story its impetus.  The issue then moves on to a quick look at the situation in Gotham through a television broadcast.   The action that follows feels cathartic, that while Bruce has been recuperating, the audience has been waiting for him to return to his former power.  When he and Catwoman take down some robbers, it feels so, so earned that you can only punch the air and shout in triumph.  And the finale gets the blood pumping, with Bruce returning to their first encounter, acknowledging some truths, and reclaiming his destiny.

BOTTOM LINE:   WHY AREN’T YOU READING THIS ALREADY?

Batman #79 feels like a minor miracle.  It’s a story, not a collection of scenes strung together with a cursory plot sketched in.  Bruce and Selina feel like real people, dealing with very human issues that no amount of tights wearing or villain punching can obscure.  Both of them come across like Cary Grant and Audrey Hepburn – scintillating characters treating each other as equals while respectfully scoring points at every opportunity.  But it is also an issue that deals with the love they have for one another, a love that indicates a change is coming to Bruce and Batman.

Batman #79 is a thrilling, entertaining issue that deals in adult themes without forgetting that comics are here to entertain and enthrall. The main characters feel like real people, with all their flaws, and their strengths, too.