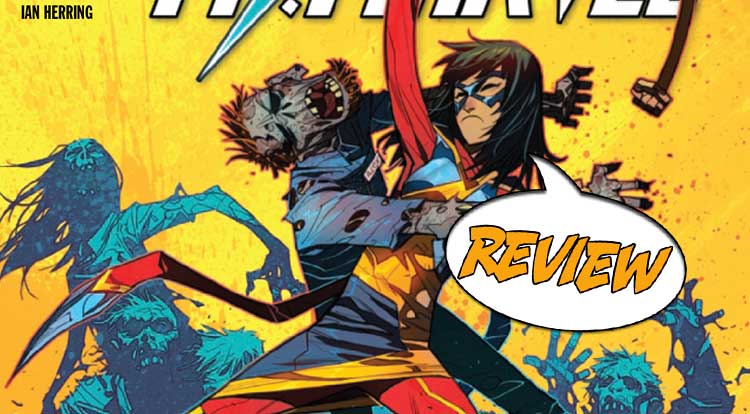 Ms. Marvel’s life has been less than great as of late. Thankfully her friends have her back and want to give her a bit of a break. But there’s just no such thing as a vacation for a superhero. Your Major Spoilers review of The Magnificent Ms. Marvel #7 awaits. Previously in Ms.Marvel: Kamala Khan’s life has been a bit of a roller coaster as of late. After a trip to space, she has a brand new fancy suit.  On the other hand her father has contracted a deadly illness that even Tony Stark can’t cure. She has never been so confident as a superhero, but her civilian life has become nearly impossible to handle.

Just A Bit Of A Road Trip

The Magnificent Ms. Marvel #7 starts out with a quiet moment at the Khan household. Kamala is getting ready for school, while her mother is struggling to handle keeping her household in check while taking care of her husband’s new medical routine. Kamala tries to assist however she can, but her father insists that life should go on as normal, regardless of his illness. At school things aren’t much better. Ms. Marvel is exhausted from her recent superhero exploits and falls asleep. She’s informed by her teacher that her grades are slipping.  Her friend Zoe is in a similar situation and needs some extracurriculars to make it into college. Feeling like they both need a break Zoe suggests a little day trip in her parent’s car for both her and Kamala. Their friend Nakia joins them as they set out to obtain the “America’s Greatest Gyros”.  During their trip Nakia informs the other two that the restaurant they’re heading for is closing soon due to the encroachment of a corporation known as Rubicon. Once they arrive, it’s apparent that not everything is what it seems. The diner is filled with what seems to be brainwashed Rubicon employees, demanding for a mysterious “Report”. The trio attempts to beat feet, but are soon overtaken by a horde of Rubicon employees. Kamala dons her new suit and gets busy taking care of the brainwashed employees. That’s when her old frenemy Josh A.K.A. Discord arrives. Letting her frustrations boil over Ms. Marvel attacks Discord and has him on the ropes when his backup, Lockdown appears.

Not Sure About Discord

Ms. Marvel #7 is an example of what makes Ms. Marvel great. It’s one part young person drama and one part crazy superhero antics. This has been a staple of not just this current run of Ms. Marvel but the history of the character. There are a few things in this issue that comes off a bit strange though. First of all is the rather nonchalant way Kamala, Zoe, and Nakia react to the obviously threatening Rubicon employees. Also, as it stands, the inclusion of Discord and Lockdown doesn’t really make sense. It seems like they’re really pushing to make Josh/Discord a bit of a nemesis for Ms. Marvel, but his continued motivation of being “abandoned by his friends” just doesn’t really make sense, considering how all of his and Kamala’s past interactions have ended. The best parts of this issue are the scenes at home and at school, which is a bit of a shame since those scenes are dragged down by a lackluster confrontation with a weak villain.

I won’t say that I didn’t like the art. I thought that this may have been the best depiction of Ms. Marvel’s new suit that I’ve seen so far. Also, the brainwashed Rubicon employees are pretty creepy. The issue I have here is that Kamala, Nakia, Zoe, and Josh all look a bit old. There’s a real Dawson’s Creek effect here, where it looks like 20-somethings trying to portray high schoolers. It’s not an egregious error by any means, just a bit of a departure from previous issues where there was no doubt about the age range of the characters.

The real draw for this issue is the first 2/3s. Seeing Kamala’s family trying to cope with the looming tragedy of their patriarch’s illness is a really compelling group of scenes. Also, the following pages showing a group of teenagers trying to cope with the complexities of their lives in a familiar way is nice to see. It’s the final third that falters. Discord is just not a strong foil for Ms. Marvel and the inclusion of a zombie-like presence doesn’t do much to up the stakes.. 3.5 out of 5 stars.

The Magnificent Ms. Marvel #7 is an issue that continues the title’s run of being pound for pound the best young readers comic book out there. It’s unfortunately hampered by a lackluster threat that feels more like a distraction from a more interesting plotline than a compelling scenario itself.