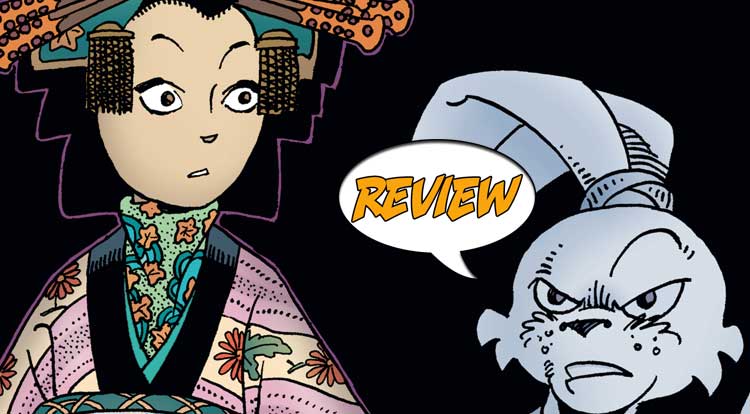 Previously in Usagi Yojimbo:  Strange circumstances continue to surround a travelling puppet show as Usagi becomes embroiled in one of his most eerie adventures yet!  Will the aid of a supernatural ally be enough for Usagi to prevent more death?

We open in a tavern, as two former samurai enjoy a final drink before one ships off to escort some goods to the border. As he makes his way through the cold night, he keeps hearing strange shuffling noises behind him, eventually turning to see a horde of waist-high attacks rushing him! Even his sword is of no use, and the next morning, Usagi and his comrade, Sasuke are part of the crowd that finds the body. They note that the samurai seems to have had the very life drained from him, but the arrival of the authorities puts a stop to their snooping. With nothing else to do, Sasuke and Usagi take in the latest chapter of the Bunraku, with our hero in awe of the skill of the puppeteers and shocked at how much younger Takagi-Sensei, the head puppeteer, looks. Even more unusual, he seems to be able to see, though he was blind the day before! Rabbit and cat vow to investigate, and slip into the theatre that night to discover the terrible secret of Takagi’s puppets… and catch him in the act of another murder!

I gotta admit: This issue gave me the creeps from the very first pages. Sakai’s mastery of the much-maligned “funny animal” genre is evident in every panel, and the scenes in the dark at the beginning of the issue are as unnerving for readers as they are for the hapless samurai. The sight of what seem to be demonic puppets is likewise scary as heck, especially when they begin drawing their weapons, and even the the fact that we’re seeing a cat-man get attacked doesn’t undermine the suspense. I love how much emotion each character has (a moment of surprise for Usagi is clearly conveyed with only six lines, and expertly so) and the building of suspense throughout the issue is effective. I think the most impressive part for me is how this issue feels like a real historical document, even though it’s the story of a rabbit investigating a murder with his kittycat pal. No moment feels out of place or anachronistic, nothing throws the illusion of feudal Japan, and the immersiveness make the comic that much better.

I’ve been reading Sakai’s work nearly as long as I’ve been reading comics, and I can tell you, he’s one of the modern masters of the form.  Thus, Usagi Yojimbo #2 is a nigh-perfect chapter of a massive, ongoing tapestry, but never loses the thread for inexperienced readers, with nuanced, detailed art working in concert with a great story for 5 out of 5 stars overall. If you’ve never read Usagi, this new series seems like a perfect place to jump in and see what you’ve been missing!

Eerie, effective suspense paired with lovely art and an intriguing setting. You can’t ask for a a better single-issue experience.