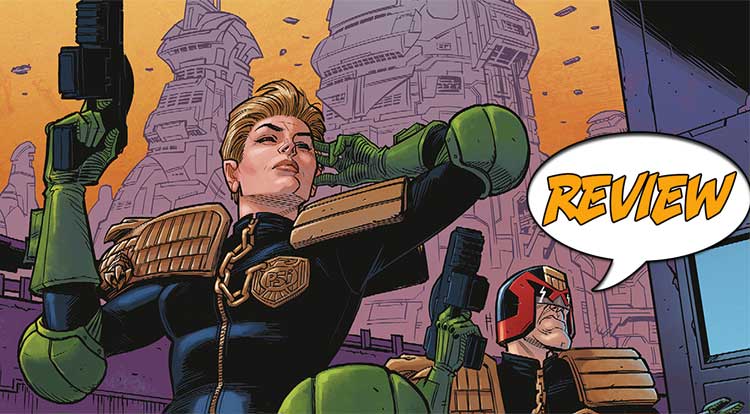 A wonderfully dark look at the world of Judge Dredd, and a compelling and entertaining look at the characters who inhabit it.

After the mayhem and destruction of the Chaos Bug, Mega-City One is a shadow of its former self. Despite the death and destruction which has rained down on them past the breaking point, the law must still be upheld. Judge Dredd and Psi-Judge Anderson continue to patrol the streets, meeting out justice wherever it is needed. Find out more about the struggle to preserve law and order in the latest 2000 A.D. Digest from Rebellion, JUDGE DREDD: GHOST TOWN. Previously in JUDGE DREDD: These stories, originally published in 2000 AD Progs 1837-1841, 1922 & 1948-1949 and Judge Dredd Megazine 343-349. After the events of the Chaos Bug, over 350 million Mega-City One citizens died. Through it all, the law must be maintained, and these stories all happen after that horrific event.  These stories follow the Judges as they try and regain control of the wastes and ruin, while pushing their very abilities to the limit.

WHEN YOU COME TO THE END OF YOUR ROPE…

The five stories contained in this digest have all been published in the afore mentioned issues of Judge Dredd Megazine and 2000 AD, but this is the first time they have all been collected into a single volume. The stories all have the thread of life after The Day of Chaos, but they also have other ties. Just how far can people push themselves in pursuit of their duty when faced with near unending conflict?

In “Wastelands”, written by John Wagner (2000 AD, A History of Violence) with art by Dave Taylor (Batman, Zorro). Even with everything in ruins, the law must be upheld because those who would break the law will always attempt to take advantage. This is the situation with the Valentino, a block purchased by Smartco and refurbished. Even as the first group of potential buyers are being given a tour, they are the victims of a violent surf gang attack. How does this tie into the old woman in the Wastelands who asked Dredd to find her son and the entrepreneur Onan Starbux’s bid to purchase the block.

Alan Grant (Batman, Doctor Jekyll and Mr. Hyde) and artist Michael Dowling Death Sentence, 2000 A.D.) bring us “Dead End.” Attempting a traffic stop gone sideways, Dredd calls for an assist and is answered by Psi-Judge Anderson. As Dredd chases the driver’s pod, Anderson sees to the busload of children that were abandoned, only to find all are dead. It’s a case of slave labor and Anderson wonders if she will be able to keep doing her job in the face of so much death or if it would be easier to end it all herself. It all leads to a death you never expect, a Judge on the rampage, and the return of an old enemy.

With the ranks of the judge’s thinner than ever, and lawlessness on the rise as never before, Judge Dredd is given order to perform a ride-along an experimental unit called Rangers. More than Citi-Def but less than Judges, they are an attempt fill in the gaps that the loss of life have brought to the front. But with a team made of rejects and ex-Judges, can Dredd show them that the law must be followed, no matter the cost, or will they show him there is more to the law than the badge? The titular story, “Ghost Town”, is brought to you by Ian Edginton (Stickleback, Kingmaker) with art by Dave Taylor.

“The Man Comes Around” is from Rob Williams (Suicide Squad, Unfollow) with art by R.M. Guera (Scalped, Le Liecre de Mars). Even with the technology that gives them long life, the battles of the past will eventually catch-up to a Judge, even the famed Judge Dredd. Feeling the weight of his career, Dredd is put into a position where he is not sure he can trust his own enhanced sight, and must still uphold the law and save the innocent.

“300 Seconds” gives us another story written by Ian Edginton, this time with art by Simon Coleby (2000 A.D., Jaegir). A group of new Judge’s are given a lesson in what it means to uphold the law, and the different ways it can be done. The story of Dredd’s daily five-minute vigil in a particular part of the city shows that it is not always about the gear, but what you can do just by being present.

WILL SOMEONE THROW YOU A LIFELINE?

While not every story in this digest is tied together through a shared plot, they all share a theme. How far can a person push themselves in the name of duty, at what point does a person break, and how they put themselves together again, if at all. These stories are an elective blend, but they all give you a different perspective on what it means to be a Judge in the world of Dredd. My favorite story, “Dead End”, is probably the most literal illustration of the themes I mention, but overall every entry here is a wonderful character study. With veteran creators at the helm, and the skilled lettering of Simon Bowland and Annie Parkhouse, these stories all have powerful voices. They will entertain even those who are not familiar with the world of Judge Dredd. And the cover art by Cameron Stewart (Batgirl, Ms. Marvel)? Icing on the radioactive cake.

The world of Judge Dredd has never been one of hope and light. This volume is as dark and nihilistic as they come, and that is saying something. However, it is the characters inhabiting the world who shine through. Even when it is dark enough to snuff out the brightest light, the stories in this digest show that there is always a hope, if not for the world, for yourself.