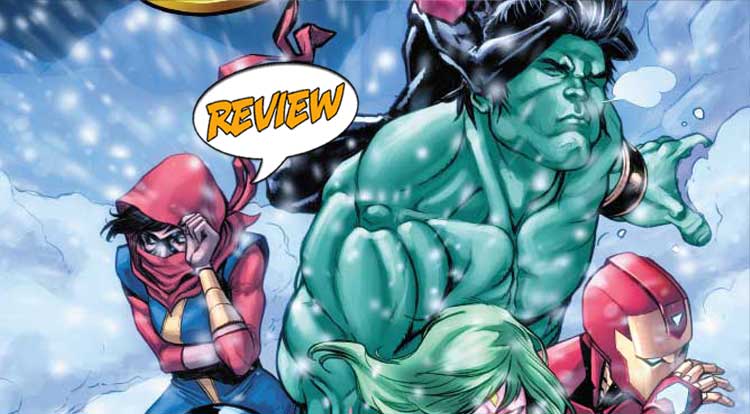 Strange doings are afoot in the Arctic Circle and one Champion may not survive the trip.  Your Major Spoilers review of Champions #20 awaits! Previously in Champions: Traveling to the Arctic Circle to investigate strange readings, The Champions (including new recruits Ironheart and The Wasp) discovered a strange facility that seemed to be repairing the melting ice caps.  Unfortunately, that facility was guarded and the sentries have shot founding Champion Nova right through the chest.

WHAT MEASURE A VILLAIN

This issue opens with a flashback to “Last Night”, wherein a young woman named Amka breaks into a strange facility.  She discovers a glowing woman who claims to be The Soul of the North, but the automated defenses attack them both, seemingly annihilating them both.  The following day, we catch up with Nova, sporting his new devastating chest wound, as the rest of the Champions look on in horror.  A disoriented Nova flies away looking for a doctor, only to crash in the freezing ocean.  Viv Vision barely manages to retrieve him, but the super-villain behind the whole thing, The Master of the World suddenly shows up.  Rather than a battle, The Champions end up having a calm conversation with him as his medical droids heal Nova’s wounds and he explains what he’s up to: Repairing the shrinking polar ice caps!  It’s a strange moment for our team, dealing with a super-villain who actually wants to do something good for the world.  Granted, it’s so that he can take over later, but as Miles Morales points out, that’s kind of a problem for the future Champions to deal with.  Our heroes are uncertain (especially Ironheart, who just got out of a similar situation with Doctor Doom trying to redeem himself), but before they can deal fully with that revelation, Alpha Flight arrives!

And they don’t look happy…

THE MASTER OF THE WORLD!

First and foremost, I’m happy to see Ironheart and The Wasp joining this team, keeping them in play in the Marvel Universe, and making this comic remind me even more of the old New Warriors team.  Marvel’s official roster says that The Falcon (from Sam Wilson’s Captain America run) The Patriot (from the execrable ‘Secret Empire’) and Crimson Locust are considered part of the team, so fingers crossed we’ll see all of them stick around.  Zub’s script this issue also features part of the origins of a new hero, reputedly, and I really enjoy seeing the conflict of idealistic young heroes faced with a villain who is actually doing good for the world.  Champions #20’s art is really great stuff, with Sean Izaakse’s full-page reveal of The Master serving as one of the best shots of the character I’ve ever seen, and even the Champions huddle to discuss whether to trust The Master shows off excellent storytelling skills.  Best of all, Izaakse’s Ironheart is the first version of the character to look unique and separate from Iron Man, rather than just a thinner version of his last armor, giving her different proportions and accoutrements to define her as her own character.

Many, if not most, of this team were designed to be interesting bits of another hero’s story, serving as fill-ins and short-term replacements and who are now no longer in those roles.  That alone makes me happy, as the tendency for a character to be massively important to one writer for one arc and then disappear is one of the least encouraging bits of modern comic book storytelling.  Champions #20 takes that compelling group of weirdos and stand-ins and makes them something entirely unique, giving them a villain they can’t just punch and playing with the team’s “Save The World For Tomorrow” themes, all the while showing off excellent art and character interactions, earning a well-deserved 4 out of 5 stars overall.  Frankly, I’d be happy if Marvel took all their sidelined teen heroes and stuck them together as a massive ever-changing Champions roster, especially if the book is this well-drawn and written…

A difficult superhero conundrum and an expanded roster make this issue stand out as something unique, and the art is excellent.