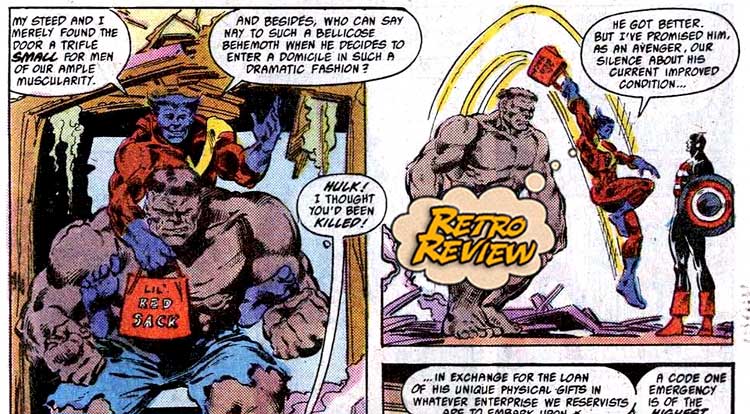 With the recent relaunch of The Avengers spinning out of the team’s dissolution, I though it might be interesting to look at a previous time the team fell to pieces.  Get ready for Earth’s Mightiest (Substitute) Heroes!  Your Major Spoilers (Retro) Review of Avengers Annual #17 awaits! Previously in The Avengers: The 80’s were a weird time for comics, especially in the Marvel Universe.  The Fantastic Four joined the Avengers, there were two Things running around, and the X-Men all died in Dallas.  And never returned.  Which would be sad, if not for all the horrible stories we theoretically avoided with their demise.  (That’s my story, anyway, and I’m sticking with it.)  As for the events leading up to Avengers Annual #17, The High Evolutionary had returned from the dead with a new plan: to eliminate the silly homo sapiens and homo superior types and evolve his own creatures, a form of life that would be loyal only to him.  The battle raged across the Marvel Universe, and involved the major heroes of the world circa 1988, including X-Factor, the New Mutants, the X-Men, the Fantastic Four, and The Punisher.  Even The Young Gods appeared briefly, proving that there would be six more weeks of winter.  Unfortunately, the efforts of these dozens of heroes failed to stop H.E., and the artist formerly known as Herbert Wyndham continued inexorably towards his eventual domination of Earth.  With most of the major hero groups out of commission, he puts into place a contingency to wipe out The Avengers by resurrecting one of their own fallen members, the robot Jocasta.  Awakened by H.E., Jocasta sends out a distress call, only for the Avengers central computer to receive the S.O.S. and find that the team’s membership consists of…  nobody.  (Doctor Druid’s disastrous run as Avengers leader is a story for another Retro Review.

Thus, the priority call goes out to all inactive members, declaring a Code One emergency situation.  First on the scene, having given up his star-spangled uniform and role as Captain America to a corrupt Commission on Superhuman Something Or Other, is Steve Rogers, currently operating as an unaffiliated hero called The Captain.  Soon after arrive his pal The Falcon, followed quickly by Hercules (who may or may not still be suffering from some brain damage from getting Pearl Harbored by the Masters of Evil.)  The Beast and the gray Hulk known as Joe Fixit arrive together, working a truly entertaining Laurel & Hardy routine, and our makeshift heroes are about to set off to engage the mysterious call for help, when a sudden buzzing sound is heard from a closet. Why the Avengers headquarters on Hydrobase has closets and looks like a New York brownstone has yet to be revealed.  (I suspect Dormammu’s involvement.)  This makeshift team hijacks a Quinjet and sets off to figure out what is up with the distress call from an Avenger they know to be dead, busting into H.E.’s anti-Avenger laboratory in heroic fashion.  There is some tension between The Captain and the super-brutal Joe Fixit Hulk, but the team manages to corral one of the Evolutionary’s lackeys, forcing him to make with the exposition… Avengers Annual #17 features art by a young Mark Bright, showing the first signs of the unique style that would come to define his work on Iron Man and Icon, with (slightly overpowering) inks by Mike Gustovich.  Gustovich is an artist that I love on certain books (his Justice Machine is classic) but whose work is an up and down proposition, especially circa 1988.  Still, the Bright/Gusto combo balances pretty well here, save for Cap’s head wings going a little bit wonky.  And, I have to say as a connoisseur of weird team books, this issue’s lineup appeals to me.  Captain America’s bossiness is somehow offset by his new status quo, and the balance of the streetwise Falcon, the brainy Beast, the surly Hulk, a punch-drunk Hercules and a completely out-of-place Yellowjacket II trying to make her way among the big names makes for good drama.

The De Facto Avengers walk right into the midst of a turf war between Atlantis and Lemuria, manufactured by H.E. to distract the underwater types from his activities.  It’s kinda wonderful to watch Hercules and The Hulk punch their way to success against the ENTIRE ATLANTEAN FLEET, while Cap and Beast figure out the real target: Krakatoa!   The team convenes with Jocasta, who helps them to get into H.E.’s massive oceanic battle-wagon and enact their makeshift plan.  Learning that H.E. is using his evolved ani-men as lieutenants, the Avengers turn his armies against one another, as the human Purifiers in H.E.’s have been brought together with the belief that they’re cleansing the human gene pool and can’t abide the animal hybrids.  The Evolutionary gets personally involved, and as you might expect, the battle takes about ten seconds.  Two street-fighters, a girl who can shrink, two strongmen, a mutant acrobat and a robot against a man with the power of the cosmos at his fingertips?

It goes about as well as you’d expect. Again, a bit of background:  When Avengers Annual #17 hit the stands in 1988, the Hulk was significantly powered down in his gray incarnation, Hercules was recovering from traumatic injuries, and The Beast was more physically powerful than ever, thanks to being repowered and re-blue-furred by a villain called Infectia.  This escape sequence shows why I love Simonson’s writing on this issue so much: The camaraderie of these catch-as-catch-can Avengers is truly inspiring.  Even when their backs are to the wall, and they come up with a last-ditch plan to save the entire world, by evolving Hercules to a form powerful and advanced enough to fight H.E. one-on-one.  Sadly, The Hulk throws the plan out of whack by demanding that he be the one evolved, slowing things down long enough for the High Evolutionary to arrive and ambush them.  Hulk is teleported away with a wave, taking one of the most powerful heroes out of the fray.  Hercules manages to get a boost of power, but H.E. seemingly destroys him in second, but Hercules reforms his physical form (thanks to a distraction assist from Yellowjacket.)  Immortal Avenger and villain fight it out, constantly increasing in power, until both are giants of pure energy.  “Thou should have aspired to less godhood and MORE HUMANITY!!!” shouts the Avenger, as he strikes the decisive blow against the High Evolutionary, and he should know.  He’s met Zeus personally… Hercules evolves far past human form, turning into energy and dispersing into the fabric of the cosmos as his horrified friends watch.  With the villain gone, the Avengers realize that the threat isn’t quite over yet:  H.E.’s foot soldiers have taken over the ship, trying to set off the volcano/bomb and finish his last works.  Jocasta manages to plug her shattered form into the computers and cause the warp core to breach and annihilate the whole ship in a blast of antimatter.  But will it take out the gene-bomb?  The four surviving Avengers fight their way back to the ship (a fight that Beast, Falcon and The Captain admit they kind of enjoy, what with having some aggression to burn) and take off, seconds ahead of the massive conflagration. These last panels of Avengers Annual #17 are actually one of the few distracting parts of the issue for me, seeing as how two of their cohorts (possibly three, seeing as nobody knows what really happened to The Hulk) annihilated makes the smiles seem a little bit off.  I suppose we can chalk it up to sudden relief and endorphins, and it’s really a minor flaw in an issue that has stuck with me more than most contemporary books.  (I have NO idea what happened in Atlantis Attacks, for instance, save that ‘Ghaur needs women.’)  The Avengers seem to really shine when they’re NOT Earth’s Mightiest Heroes with massive resources and endless power, times like Cap’s Kooky Quartet or even the underground heroes of Civil War-era New Avengers.  The Avengers properly reformed a couple of months later, with a nucleus of Thor, Cap, half the Fantastic Four and a guy in a cow-suit, but few groupings have worked for me like this issue did.  Avengers Annual #17 is one of the biggest stepping stones in my early love of the team, and even if there are some issues with the art, and massive crossover madness slopping out the airvents, it’s still a beloved book, earning 4 out of 5 stars overall.

Maybe some of this is my youth talking, but this is one of the comics that demonstrates what good one-shot comic book stories are all about…

A makeshift team, a massive crisis and Mark Bright make for a fun one-shot story. Simonson's plot and dialogue help to make it really sing!