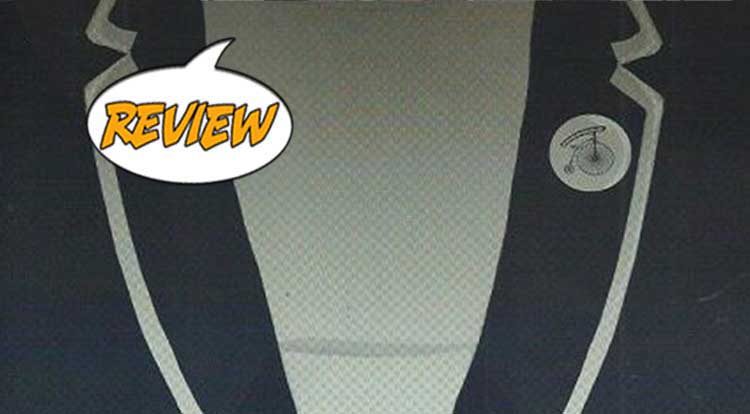 Where is Agent Breen?  In The Village. What do they want from him?  That would be telling. Your Major Spoilers review of The Prisoner #2 awaits! Previously in The Prisoner: Following a botched mission in the Middle East, MI5 Agent Breen’s partner and lover, Carey, was taken by the mysterious intelligence organization known as The Village.  Ordered by his section chief to liquidate Carey, Breen instead quit the service and went rogue, breaking into the UK’s most closely guarded installation and stealing the secret behind project Pandora, a highly classified secret.  Not so long after, knockout gas was pumped into his room, and Breen awoke to find himself a “guest” of The Village…

YOU ARE NUMBER SIX

The Prisoner #2 opens with a really disturbing childhood flashback from our protagonist, Breen, detailing his abuse at the hands of his father.  During his hallucinations, The New Number Two appears on a penny-farthing bicycle to taunt him, transitioning to a courtroom sequence reminiscent of the last episode of the original TV show.  Breen realizes as much, referencing a feeling that he is standing in another man’s shoes, but when Number Two brings out his first witness, he is shocked to see that it is his former partner!  Everyone seems to have their own agenda, as Number Two shows her footage of Breen being instructed to kill her, with his Director also suddenly arriving in The Village.  Their stalemate lasts for days, until Breen finally gets his captors to let down their guard and makes a break for it.  With Carey and Section in tow, he successfully escapes The Village, evades a horde of Rovers, but fails to make it back to civilization.  When his friends begin insisting that he tell them the truth about Pandora, Breen makes a shocking decision, leading to a seriously shocking last page.

I really enjoy the way this series has played with the concepts and tropes of The Prisoner without being a remake or sequel to the story of Patrick McGoohan’s long-ago Number Six.  There’s a modern sensibility to the spycraft in these pages, and the use of hallucinatory weirdness is both a Milligan trademark and extremely effective in this context.  (It’s also something the show did well, as anyone who has seen the last episodes will tell you.)  I like the visuals of The Prisoner #2, and Colin Lorimer’s art is evocative, if not always attractive.  That’s not to say that it’s not skillful, but that it’s showing some ugly moments with ugly emotions involved and the scratchy, angular nature of the images helps add to the paranoia of a story about spies watching everything you do and say.  Add in the Holy Crop moment that ends the issue, and I’m satisfied with this story being called ‘The Prisoner’, especially given the extended chase sequence involving an antique London doubledecker bus and the aforementioned roving band of Rovers…

BOTTOM LINE: AN INTERESTING TAKE ON THE WORLD

Aside from the obvious “taking place in The Village where spies end up trapped”, this isn’t exactly the your father’s Number Six, but The Prisoner #2 adds depth and modernity to a Cold War concept that actually still feels pretty contemporary, with some very disturbing imagery done well and a story that clearly isn’t all that it seems, earning 3.5 out of 5 stars overall.  I can’t say where this book is going, but I have to say I like it better than the Jim Caviezel reboot about a decade ago.

Some action-adventure with a psychological edge and some trippy imagery to top it off, plus a last-page shocker you kind of have to see...