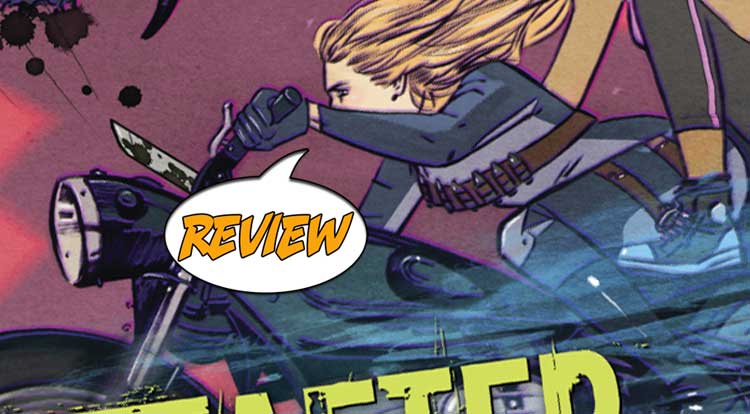 Everafter: From The Pages Of Fables #9 Review

“I’m going to fall in love today.”  That’s not the sort of thing you tell yourself every morning…  Your Major Spoilers review of Everafter: From The Pages Of Fables #9 awaits! Previously in Everafter: “Tension prevails and emotions flare as the Shadow Players monitor the hostage situation at Plano South Senior High. With options dwindling, Bobby Speckland intervenes with a message for the young captors. Across town, Tanner locks horns with Bo and Connor at the height of their breakneck escape from some vindictive giants of Texas folklore-who are hot on their heels with an arsenal of weaponized livestock.”

This issue begins with a prediction, followed quickly by the arrival of Bobby Speckaland, a young “mundy” who gained magical powers in the wake of the unleashing of Fable magic.  He has come to investigate a disturbance at Plano High School, where he successfully infiltrates, moments before the Plano Goat Man attacks with a herd of mostly beheaded livestock.  A frenzied motorcycle chase ensues, while animate scarecrow Feathertop tries to figure out what exactly is happening.   Thanks to a character who can only be described as a cartoon frog, everything gets put together, just in time for Connor Wolf (the son of Bigby and Snow White, I believe) to discover a coded message from Bobby indicating that, while he has been inside for a couple of hours, from his perspective it has been sixteen years…

A LOT OF THE SAME CHARM

The thing about Fables that was both charm and curse was the intricacy of the storylines and the sheer number of characters in play, something that Everafter shares with it’s precursor.  On the one hand, I really enjoyed getting thrown into such an exciting story, and the basic structures and character archetypes are clear, but on the other, I want to know more about everyone in this issue.  (That’s probably a selling point, as I’ve already put the first 8 issues in my cart at my digital comics retailers.)  Travis Moore’s art is fascinating throughout the issue, rendering quiet conversations with Bo Peep and high-speed motorcycle chases with equal skill, and the final page reveal is wonderfully expressive work.  The greatest part of the issue is the first page, which guarantees that I’ll be picking up the next issue based on its simple beauty and the strength of the presentation and facial expressions.

In short, Everafter: From The Pages Of Fables #8 is a strong individual issue, one that immediately convinced me to pick up the previous issues to find out more about this world and its characters, dealing out awesome visuals, strong character moments and a truly fascinating hook for a well-deserved 4 out of 5 stars overall.  If you were into ‘Fables’…

Actually, you’re probably already reading this comic if you were into ‘Fables’, but nonetheless, you should check it out.

This is my first issue of this book, but it absolutely won't be my last... Really fun, really engaging.