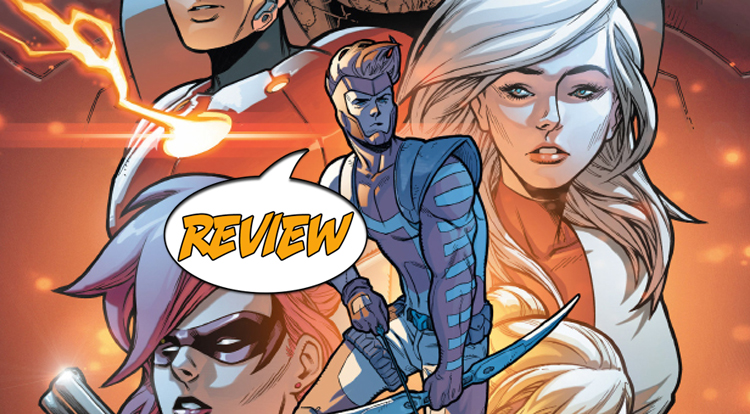 It’s been 25 years since the first first issue of Youngblood, and now Rob’s brain children have returned home to Image Comics.  Can they recapture the magic of 1992?  Your Major Spoilers review of Youngblood #1 awaits! Previously in Youngblood: Once the governments superhuman strike team, things have changed for Youngblood.  Former super-soldier Die-Hard is now the President Of The United States, with Vogue as his first lady.  Most of the team has dispersed, left to rot in prison or hospital facilities, but a new generation of masked vigilantes has stepped up to fill the void, only to find one of their own gone missing…

We open with a young hero who goes by the fun nom de guerre of Man-Up (he has giant-size growing powers) taking to the streets.  Some time later, his friend Petra, who also coordinates her vigilante activities through a social media app called HELP! has taken up the cause of what happened to Man-Up.  There’s a lot of nicely handled exposition in these pages, done with series of still shots featuring the feedback for Petra’s heroics, leading to the reveal that she’s working with new young versions of Sentinel, Doc Rocket and someone who may be Suprema (the dialogue boxes are weirdly coy about this, making me wonder if there are rights issues related to Supreme and his supporting cast), dealing with the villains who would have been handled by the now-outlawed Youngblood.  President Die-Hard responds to the dangerous trend of masked supers by activating two of his old teammates, Shaft (in prison for an unknown offense) and Badrock (who is suffering from a strange disease).  Our cliffhanger ending is Shaft arriving in the middle of a fight between the new kids and an old villain, but is he there to help or to arrest them?

Bowers and Towe do a good job with the shopworn “many years later, everyone you know is different” dystopian set pieces, and I have to say that this is the first time I’ve ever seen Die-Hard as interesting at all.  Towe’s art is loose and fun, and the use of young teen/twenty-something heroes works with his style, although it undercuts Shaft’s big moment that he looks to be about 22 himself, even though he’s the grizzled veteran hero come to chew bubblegum and kick ass.  Petra is compelling in her role as the new Vogue, and her search for a lost hero is a good hook to start the new series off.  Had the book ended there, I’d be 100% excited for more.

Then, the backup story kicks in: Future versions of what seem to be Troll and Badrock arrive in Shaft’s prison cell, speaking circular nonsense about being sent back in time to find “The Book”, while Shaft snores away.  It’s a maddening scene full of portentous nonsense, and since it’s drawn by Youngblood creator Rob Liefeld, it’s really quite ugly, featuring ridiculous perspectives, no sense of scale, and a sleeping Shaft who is clearly dead.  IN short, it’s a reminder of everything that has gone wrong with previous iterations of Youngblood, and undermines the successes of the first story.

This is the sixth or seventh (depending on how one counts, though it could be more, thanks to things like “Youngblood: Bloodsport” and “Youngblood: Imperial”) attempt to bring back Liefeld’s founding Image book, and I want to make it clear that I’d truly like to see this one succeed.  The first story has a compelling hook, interesting new (and new-ish) characters and a take on the ‘Bloods that feels fresh; the second is just… not good.  Youngblood #1 is thus a mixed bag, showing that there is potential for something long-term, but that the book’s creator and repeated weakest link is still strongly involved and could bring the whole thing down hard once again, leading to a middle-of-the-road 2.5 out of 5 stars overall.  If they can commit to the kind of storytelling that we see in part one of this issue, this could be the Youngblood book that breaks twelve issues…

A tale of two stories: One is solid, entertaining and fresh; the other is a pointless retread, making for an imbalanced first issue...