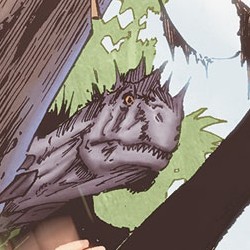 The Teen Titans are separated and stuck on a mysterious island full of dinosaurs in an unknown location. For a Major Spoilers look at getting the band back together, take the jump.

Previously in Teen Titans: The Titans helped the Legion to escape and free a number of teen metas from the clutches of N.O.W.H.E.R.E. and Harvest during the culling. In the escape they got blasted away to an as of yet unknown location and scattered. Now, waking up to dinosaurs, we join the Titans.

We open with Kid Flash freaking out while trying to tie up a very bird-like dinosaur with random vines to save the team. With the dino at least semi-contained he rushes Red Robin then Bunker and Solstice to the top of a tree for relative safety. For most of this sequence it’s merely Bart freaking out a bit as he forgets Bunker and Solstice for a moment the Red Robin has to remind him of. Tim then demeans the group as he flies off to do some aerial recon. Because of his off-putting comment Bunker confronts him about his troubles and is put down for it. Within this interaction we are given good insight into the relationship these two have as Miguel, instead of backing down, confronts Tim about it, which is brilliant. There moment is suddenly interrupted by another moment tough, the return of Superboy and Wonder Girl.

The reunion is pretty well done too, with the entire group actually being mostly unguarded, even Superboy who both looks and sounds genuinely excited to have the team back. Much of the rest of the book is a lot of simple character moments as they recuperate on the island, many of the moments going to Miguel. We see Superboy and Red Robin getting closer, a relationship forming between Bart and Kiran, a glimpse of Wonder Girl’s secret, and Tim telling Miguel the Titans are done, to Miguel’s protestation. Miguel is then able to find Danny the Street thanks to the appearance of non-psionic, real bricks. After collecting him, Danny makes the ultimate sacrifice to get the team off the island. It’s a touching moment with Tim trying to say now and Cassie becoming a voice of reason declaring it to be Danny’s choice leading up to a moment of silence in a place marked Danny the Alley.

Many of the dinosaurs here are feathered and a bit more bird-like than one normally imagines which is absolutely perfect. First, this is what many paleontologists are starting to believe to be true, dinosaurs being the ancestors of birds and as such having feathers and the like, with some substantial proof to back them up. Secondly, this gives Booth quite a bit of breathing room on leeway with how certain species would look. By making them more bird-like than most people imagine, the species can blend and change to how Booth wants to use them. Of course, they also just look awesome. The rest of the book is impressive too, especially a panel showing a scene from the Superboy/Wonder Girl story set on the back of a trap door Cassie is opening.

BOTTOM LINE: We have character

Teen Titans #10 is a very quiet, character driven issue. Miguel is very much becoming a strong character, having moments showing off his charm, his religion, and his persuasion without any bit of direct pointing. Most of this is done in great show-don’t-tell moments throughout the book. This issue finally feels like a team is really coming together. We also get no explanation of the mysterious island because of the method of escape, but for now that seems fine. All in all, as a very solid character story Teen Titans #10 manages 4.5 out of 5 stars for making everyone a bit more likable.