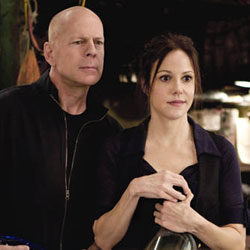 I have an incredibly embarrassing admission to bring to the readers of Major Spoilers. This may very well cost me geek credibility cache, but I owe you the truth.

Here’s the thing: I have never actually read Warren Ellis’ and Cully Hamner’s graphic novel, RED. Further details will only serve to compound my lapse in fandom. For example, I consider Warren Ellis to be my favorite comics author. When I say I own EVERYTHING else that Ellis has produced, I’m not overstating the facts.

Rather than spend any additional time lamenting my contemptible actions, I have decided to instead speculate on the uniquely intrinsic benefit that my lack of exposure to the graphic novel has allotted me. I went into the Cineplex with few preconceived notions of what to expect. My red and green-tinted fanboy spectacles have been cast aside, freeing me from the inevitable comparisons that typically plague my critical palate during comic-to-film adaptations.

So, faithful Spoilerites, get ready to get your ass kicked while smiling throughout the entire journey. Red is the single most enjoyable film I’ve seen all year.

The cast is virtually unmatched; Bruce Willis, Morgan Freeman, John Malkovich, Helen Mirren, Mary-Louise Parker and Richard Dreyfuss. Beyond that, the characters are a perfect fit for each of the actors. The plotting is methodically paced so that each appearance of the assembled actors allows for the script to breathe. You Just Got Your Ass Kicked By An Old Man

The heart of the plot, as is the case with most genre films of this type, centers on a love story. Willis plays retired CIA operative Frank Moses, a man with a secret. He’s killed for his country, overthrown governments and has rightfully earned himself a reputation as quite the badass. The real secret here is that for perhaps the first time in his life, he’s found love in sporadic phone conversations with Pension Services phone operator, Sarah Ross (Parker).

After a few short years of retirement, Moses is the focus of an organized effort to end his life. Moses proves himself as the embodiment of the CIA acronym, RED (Retired, Extremely Dangerous). He is actually just one of several names on a notorious list; a list that quickly translates to death for anyone on the page, except for one.

One More Time, This Time With Feeling

Moses’ unceremonious extrication from retirement means that in order for him to survive, and save the life of his love interest Sara, he will need to put the band back together. It just so happens that the band is not as rusty as one might think and they’re more than ready to play one last mighty comeback concert. Just replace musical instruments with firearms and you should have a pretty good idea of what to expect.

Every single primary and secondary character in RED permeates with likeability. The premise of ‘good guys’ and ‘bad guys’ is seriously challenged throughout the movie. It’s not as simple as black and white labels. Perspective is an important device within the film, contributing to the challenge the viewer is face with. Why are these people being targeted and who’s to blame?

RED clocks in at 1 hr 51 min and is rated PG-13. You definitely feel the extended length of the movie. 10 to 15 minutes of edits may have created a more streamlined effort. However, the characters and story prove to be extraordinarily appealing, charming us progressively as the film reaches its conclusion.

I had a great time at the Cineplex and now I’m more driven than ever to get my hands on the graphic novel. We can only hope a few hundred thousand other members of this weekend’s audience share my enthusiasm. Word of mouth on RED should be strong and I would venture to guess that next weekend box office ticket sales will not suffer the dramatic drop off that many genre films face against.

RED is funny, smart, charming, exciting and engaging. What more can you ask for? I enthusiastically give this 4 out of 5 stars.