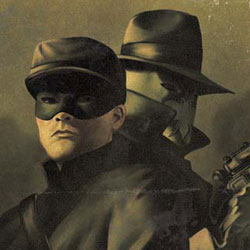 Green Hornet #11 is written by Phil Hester and has art by Jonathan Lau, with covers by Alex Ross, Phil Hester, and Jonathan Lau!  The Black Hornet is history, but a new, even deadlier threat has grown right in the heart of Century City, and it may already be too late for The Green Hornet and Kato to stop it. How can Green Hornet scare a street gang out of business when the gang members themselves have no fear of anything, even death? Is the horrifying power behind their fearless ferocity truly supernatural? And just who is Saint Death? The Green Hornet Year One #9 is written by Matt Wagner and drawn by Aaron Campbell, with covers by Matt Wagner and Francesco Francavilla!  The story continues to trace the formation of the Green Hornet and Kato’s crusade against crime and the arsenal necessary to make that happen.  Rusty Schmidt finds himself frustrated in trying to, but at Britt’s insistence devises a non-lethal weapon that can still put the Hornet’s enemies out of commission, an elusive trick to which Kato may hold the solution.  Meanwhile, in the “present” day adventure, the Hornet and Kato step up the pressure on mob-boss Skid Caruso’s operations.   But, unbeknownst to them, Caruso has called in his own outside muscle-a merciless and sadistic enforcer known only as “The SCOURGE”!

Kevin Smith’s Kato #9 – written by Ande Parks and drawn by Diego Bernard, with covers by Ale Garza, and Carlos Rafael!  As the new Kato recovers from a psychic assault, she readies herself for an all-out attack on Takeshi’s forces.  She’s outnumbered, young and inexperienced, but her father, the original Kato, taught her well.  Kato sets traps and prepares herself for the clash with a league of well-trained ninjas.  This issue takes place in Century City and leads up to the thrilling finale of this arc, as well as directly into the events of Kevin Smith’s Green Hornet series.

Kevin Smith’s Kato Annual #1 a special story written by Ande Parks and drawn by Edgar (Super Powers) Salazar, with covers by Ale Garza, and Edgar Salazar!  Kato’s day of acclimating herself to her new city and country is interrupted when a giant monster begins rampaging through Century City.  Kato finds herself battling a menace right out of a classic Japanese man-in-suit movie, with the fate of her newly-adopted city in the balance.  Can Kato solve the mystery behind the monster’s rampage in time, or will this monstrous menace destroy Century City just as Kato gets settled?  It’s solid solo action for the all-new Kato!

Kevin Smith’s Green Hornet Vol. 2: Wearing o’ the Green Hardcover is written by Kevin Smith and drawn by Jonathan Lau, with a cover by Alex Ross.  The war between The Black Hornet and The Green Hornet reaches its shattering climax in this second volume of Kevin Smith’s daring re-imagining of the classic character. As The Green Hornet and Kato pursue his father’s killer, The Black Hornet reveals a plan that could spell doom for the world itself. Played out on the streets of Century City, a deadly struggle between Hornets threatens to destroy not only our heroes, but the legacy they hoped to restore. It’s high octane action, drama, and humor, as only famed filmmaker Kevin Smith could provide.  Collecting issues #6-10 of the series based on Kevin Smith’s unproduced Green Hornet film, this volume also features a complete cover gallery by industry greats Alex Ross, John Cassaday and Greg Horn. Kato Origins Vol. 1: Way of the Ninja Trade Paperback is written by Jai Nitz and has art and cover by Colton Worley!  In early 1942, just months after Pearl Harbor, a police detective knocks on Britt Reid’s door. He’s looking for Kato. There’s been a murder in the small Korean section of town and they want Kato’s help with the locals. Arriving on the murder crime scene, they piece together the crime until they find a single Japanese character written in blood: “coward”.  From the pages of Matt Wagner’s Green Hornet: Year One comes this thrilling spin-off series starring Kato!  This trade paperback collects issues #1-5, and contains a complete cover gallery.