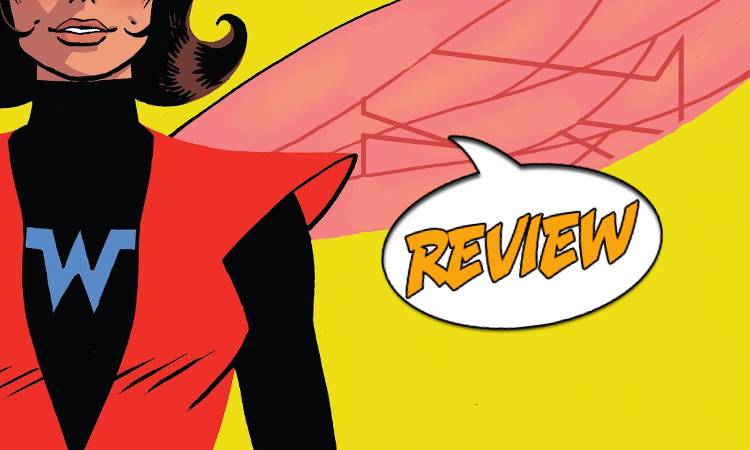 It’s the sixtieth anniversary of Janet Van Dyne’s debut as The Wasp, and someone is targeting our hero. Someone… or someTHING? Your Major Spoilers review of Wasp #1 from Marvel Comics awaits!

Previously in Wasp: Fashion designer, businesswoman, and founding Avenger – Janet Van Dyne has worn many hats over the course of her superheroic career. But when an old enemy threatens Janet and her fellow Wasp, Nadia, seemingly against his will, the Van Dynes will have to confront the ghosts in their shared history to get to the bottom of the mystery.

A TEAM NAME IS EASY, A *BAR* NAME IS HARD

We open with a flashback to Janet’s father, Vernon, a scientist who accidentally brought an alien life form to Earth so many years ago. His death brought in Ant-Man to investigate, and as Janet remembers it, it’s the moment when she actually became a superhero. That, however, is all in her past, and in the present, she’s got a new business to launch, an upscale bar for the super-set. All she needs is a name, but before she can figure out what to call her lounge, she has to navigate the superhuman ban that Mayor Fisk enacted for New York. It makes getting across town to visit step-daughter Nadia complicated, but things get worse when a villain crashes through the ceiling to attack both Wasps! Strangely, though, Whirlwind doesn’t seem to WANT to be there, even claiming that he wants to “make it quick.” While the younger Wasp leaps into action to find a technological edge, Janet plays the psychological game against the man who once stalked her. To throw him off, she reminds him that she could simply shrink down, hide in his home, then bore into his brain and kill him in his sleep, and no one would suspect a thing…

It frightens her even more than it does him.

Bronze Age fans like myself remember Janet Van Dyne as the unflappable leader of The Avengers, the woman who fought off Magneto single-handedly, who defeated the X-Men, led the team through the most brutal attack the Masters of Evil ever attempted, and was basically just pretty sort of marvelous. It’s good to see that Al Ewing remembers, as this issue brings back the confident Wasp, one who can fight evil, design beautiful dresses, and run her own exclusive club without missing a step. Her defeat of Whirlwind this issue is impressive not merely for the fact that he cannot lay a single FINGER on her, but for how effectively she shuts down his offense. The moment where she reminds him that the last time he dared to attack her, she choked him out with a lead pipe without using her shrinking powers at all is wonderful stuff, especially for the visuals. Nie’s art provides nuance and expression that makes it clear that, five foot one or not, The Wasp is the woman who named the Avengers in the first place. The complex interplay between the younger, but somehow larger Nadia and Janet against the brute silhouette of Whirlwind is excellent stuff.

BOTTOM LINE: IS THAT A GREEN DOOR I SPY?

This issue even draws a line between the origins of both heroes, adding in something familiar to fans of Ewing’s last founding Avengers book, Immortal Hulk. Wasp #1 is a lovely first issue, taking the time to explain the origins of both heroes to wear the name, wrapping it all in well-plotted and dialogued story beats, and rounding things off with strong art, earning 4 out of 5 stars overall. If you only know the Wasp from the post-Bendis era of Avengers, you’re in for both a treat and a little education, and you should absolutely pick this comic up.

Janet and Hope face down the Wasp's arch-foe while someone worse lies in wait and Janet reminds readers that she is just as much a founding Avenger as Thor, Iron Man or Captain America.