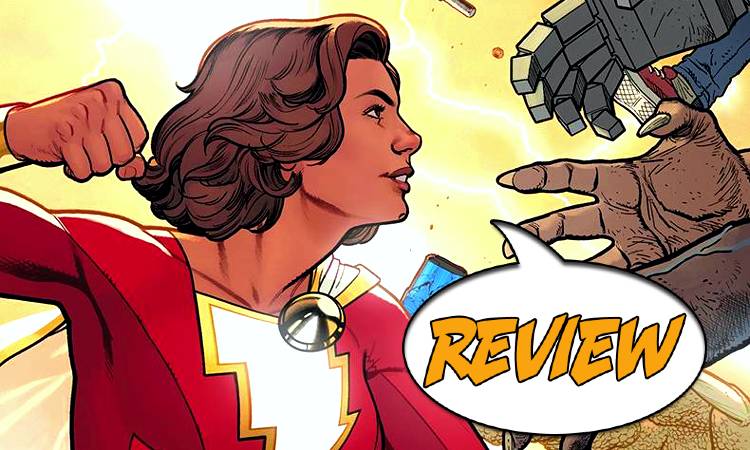 The New Champion of Shazam #4 Review

Mary now knows where her foster parents are being held. Unfortunately, she also has to find baby sister Darla… Your Major Spoilers review of The New Champion of Shazam #4 from DC Comics awaits!

THE NEW CHAMPION OF SHAZAM #4

Previously in New Champion of Shazam: While Mary was focusing on her duties as the new Shazam, her now-powerless little sister struck out on her own to help solve the mystery of the missing persons in their city. Now it’s up to our hero to find the true villain before everyone is lost for good. Little does she know, the key to saving the day awaits her at Fawcett Community College with her mysterious mentor, Dr. G!

THE LAST BATTLE OF MARY

With the revelation that her sister Darla has been taken by the mysterious person behind the kidnapping of her parents, Mary leaps into action, instructing her brothers to call the authorities and have them evacuate the area around the community college. Upon arrival at the school, Mary discovers who is really behind her travails and also what the “G” in Dr. G stands for. It’s a shocking revelation followed immediately by the onslaught of a horde of alligator-men, then the attack of three techno-magic users. Using her own personal skill set, Mary outsmarts and out-maneuvers her attackers, making her way to the real villain while thinking about how her approach differs from her brother Billy. The villain is dispatched not just by her power, but her brains, her preparation, and a little bit of help from Darla and Hoppy. As the issue ends, a reporter tries to call her “Miss Marvel,” but Darla shuts her down, forcefully telling the woman Mary’s real super-hero name.

THE SECRET OF DOCTOR G

This issue makes for a really well-done closing chapter, picking up threads of plot that have been percolating since issue one, and wrapping everything up cleanly and naturally before sending Shazam off on her next adventure (something to do with the Lazarus Planet crossover). Shaner’s art is absolutely gorgeous throughout the issue, but special attention must be paid to the full-page spread where Mary is lifting rubble to save innocents, with dramatic lighting and narration by Darla. All four issues are full of Easter eggs and references to classic Fawcett characters, making for a little bit of extra baked-in Nerdery for those of us who like that sort of thing. (At least one of the creators clearly does. I suspect it’s Doc Shaner.) Campbell’s scripting makes Mary Bromfeld as interesting and noble a figure as Billy Batson has ever been, with her maturity giving Shazam some much-appreciated new energy.

BOTTOM LINE: THIS ONE IS JUST GREAT

In short, The New Champion of Shazam #4 brings surprises, humor, references, and excellent art, with college-age Mary finally taking on the name and mantle that her brother has been carrying since 2011 and making something new and exciting of it, earning 4.5 out of 5 stars overall. The only thing that worries me is a message from Billy that kicks off the next crossover, hinting that her new status quo may be short-lived.

THE NEW CHAMPION OF SHAZAM #4

Everything comes full circle with a satisfying narrative crunch and truly stellar art.

Well worth your time.