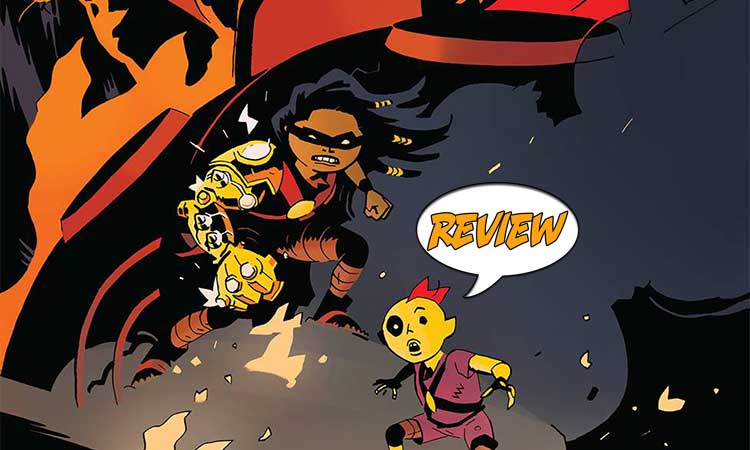 Kaya and a small group of Lizard Riders set a trap for the Magron. When Zothan rushes it too soon, the monster retreats. Can they face the Magron down in its lair? Find out in Kaya #3 from Image Comics!

Previously in Kaya: Kaya and Jin are now with the Lizard Riders to hunt the Magron. They lose their supplies in a flash flood, and Kaya goes hunting with Seth and Zothan. She learns that Zothan is a traditionalist, and Seth, like their current Queen, is more open to new ways. Seth hopes that Zothan can learn something from being among humans and others. Jin sneaks out and catches up to them. Seth takes him back to camp, leaving Kaya and Zothan to continue the hunt. Zothan taunts her about Seth’s being in love with her, but having other obligations at home, does not help her when the boar they are hunting knocks her off a cliff, and is surprised when the boar attacks him. Kaya gets a clean shot at it, and he begs her to let him have the credit. Kaya will, as long as she gets a share of the reward for hunting the Magron.

HELPING OUT IN DESPERATE TIMES

Kaya #3 opens with Seth talking to a farmer. The Atrians dammed the river, which drove the Magron into the populated lands for hunting. The Magron has killed all but one of the farmer’s cattle. He describes the Magron as a gigantic, armored, two-headed spider. Zothan offers to hunt the Magron, if the farmer gives them his last ox. The farmer is skeptical, but Kaya may understand what Zothan was thinking. They stake out the ox and dig a large ditch around it so it can be bait in a trap for the Magron.

As they work, Zothan talks with Muska about his loyalty to the Queen. He claims that he will be King soon, and he wants Muska to follow him and offers to reward him. But what does Zothan have as a reward? Meanwhile, Jin confronts Seth about not telling Kaya the truth. He thinks it is important for Seth to be honest, but he wants to be honest himself and not have to admit he has kept Seth’s secret from his sister, especially since now they are finally starting to get along.

That night, as they wait for the Magron, Zothan brags about how easy it is to kill the beast. Kaya reminds him of her share of the rewards. He offers her even more if she helps him to raid Goro Bay. Frustrating as he is, Zothan is an excellent foil, someone who keeps changing the goalposts on his end of the bargain.

The Magron arrives. In his excitement, Zothan attacks early, misses his strike, and the monster runs back to its lair. They follow it back and Kaya makes Zothan go into the cave first. In the main cavern they find it has a network of connected tunnels to hide in. It leaps out of one opening and into another, striking as it goes. It pops up again, and this time it catches Muska and drags him away. Zothan picks up Muska’s blade and runs outside.

Kaya realizes they will need to collapse some of the tunnels. When they are down to four, Seth sets up a trap using his spear and a length of rope. When the Magron pops out, he jumps onto its neck and catches both of its upper jaws in the rope. With his leverage, he can force the monster’s heads up so Kaya may be able to reach the vulnerable spot at the base of its neck!

VIBRANT AND FULL OF ENERGY

The art of Kaya #3 is delightful in the way it brings the world to life. Digging the trap for the Magron is hard work for everyone involved, but it does give Jin the opportunity to speak privately to Seth. Already in a couple issues the young boy has grown beyond being a whiny brat. He is still young enough to see life in simple terms, such as earnestly thinking that the truth is most important. In turn, Seth knows that he is a prophesied hero, and demands to know what the gods were thinking when they threw Kaya back into his path. It is a subtle way to show us there is more to the story than the current action.

The farmer tells everyone up front what the Magron is like. Even though we know this, at night when it approaches and we hear it before seeing it, there is a moment of dread. Then it arrives and it is every bit as terrifying as we imagined. It is massive and bulky, looking more like a crab than a spider, but that mass makes it seem more real. I love its lair and our view of looking up into the dome of the cavern, a dome full of round tunnel openings dripping with green goo. The Magron leaps with frightening ferocity from one tunnel to the next like the world’s deadliest Whack-a-Mole game. It is a creative setting for the big fight.

Kaya #3 has ramped up the plot quickly. We thought we knew where this was headed, but like many journeys, the path is full of obstacles and digressions. The main characters are rich with hopes and flaws making the read enjoyable on multiple levels.

Kaya and the Lizard Riders face off against the Magron!