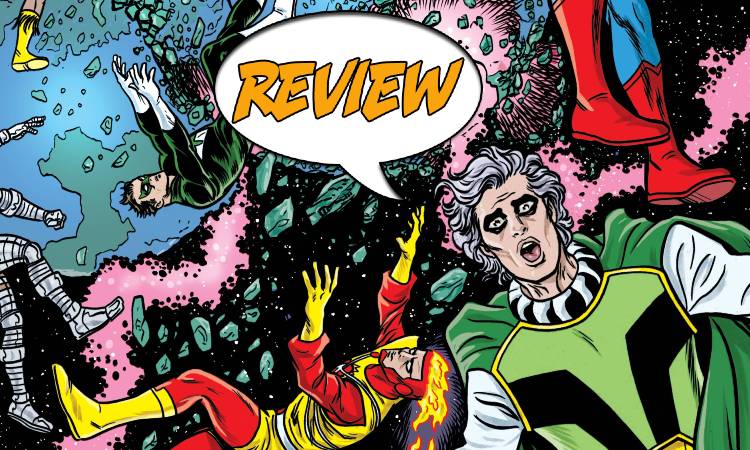 Deathstroke has set out to break the spirits of the heroes of the DCU. It looks like it’s working. Your Major Spoilers review of Dark Crisis on Infinite Earths #3 from DC Comics awaits!

Previously in Dark Crisis on Infinite Earths: The Battle of the Emerald Army has begun! Hal Jordan has launched an all-out war on Pariah and the Dark Army to avenge his fallen Justice League teammates… but how can one man stand in the way of the Great Darkness? Meanwhile back on Earth, Titans Tower has burned and Deathstroke’s army has continued its scorched-earth march across the planet. To stop Slade Wilson, the young heroes of the DCU might have no other choice than to turn to the brutal tactics of Black Adam…

In the aftermath of the attack on Titans Tower, Beast Boy lies in a coma and Nightwing will not leave his side. The rest of the Titans are torn by Deathstroke’s latest plan, using his army of underestimated super villains to hunt down anyone who dares to play the hero. Across the DC Universe, heroes are under siege, with some quitting, some running, some trapped, and a very few trying to forge a new Justice League under the fractured leadership of Black Adam and Superman. Adam berates the young heroes at every turn, insisting that the only way to outmaneuver Deathstroke is to become as ruthless as he is, preparing to mount Count Vertigo’s head on a pike outside the Hall of Justice. Superman angrily tells him to knock it off, but it’s the appearance of Wonder Girl Yara Flor that breaks the camel’s back for Jon Kent and Teth-Adam. Robin snarls at his one-time best friend that Black Adam was right, that mercy killed their fathers and the entire League. That’s when Green Lantern Alan Scott arrives with the full roster of the JSA and an offer of help from the last century. As for Black Adam, he seeks out a team more likely to believe in his murderous intentions: Lex Luthor’s Legion of Doom!

NO LEAGUE? WHAT ABOUT A SOCIETY?

The issue also features Green Lanterns Jordan, Rayner, and Mullein entering a Black Lantern power battery to find themselves (possibly) in the mind of John Stewart. Comparatively to the original Crisis on Infinite Earths, this issue is MUCH darker and much bleaker, but the stakes aren’t quite as clear. Moreover, they don’t feel quite as universally serious, focusing more on the personal losses of the heroic community. That’s smart work by Williamson, helping to differentiate this from Crises Final, Infinite, Identity, and what-have-you. Sampere’s art is likewise distinct from what has come before, avoiding some of the pitfalls of this kind of big crossover, like those that befell Phil Jiminez in the pages of Infinite Crisis. I spent as much time identifying characters in big group shots as I did following the plot, which isn’t a dreadful thing for me, but may not appeal to all readers, and there’s still a big question mark in the middle of Pariah and Deathstroke’s plan here.

Even with so many moving parts, Dark Crisis on Infinite Earths #3 holds together pretty well, thanks to the art of Daniel, Daniel, and Danny, while Joshua Williamson’s ability to pull strong character beats out of brief bits of dialogue or action (like Superman’s incensed confrontation with Black Adam) serves him well in a book that has such a huge cast, leading to a better-than-average 3.5 out of 5 stars overall. I have to say, though, that the cover and solicitation copy promising a Battle of The Emerald Army that did NOT occur in these pages bothered me, but since I didn’t want to see Hal Jordan bull his way in and win the day out of sheer maverick machismo, I can’t hold it against the book.

Hopelessness pervades the book, but the return of the JSA and the implication that the League isn't quite dead yet help, as does energetic art from Sampere and company.