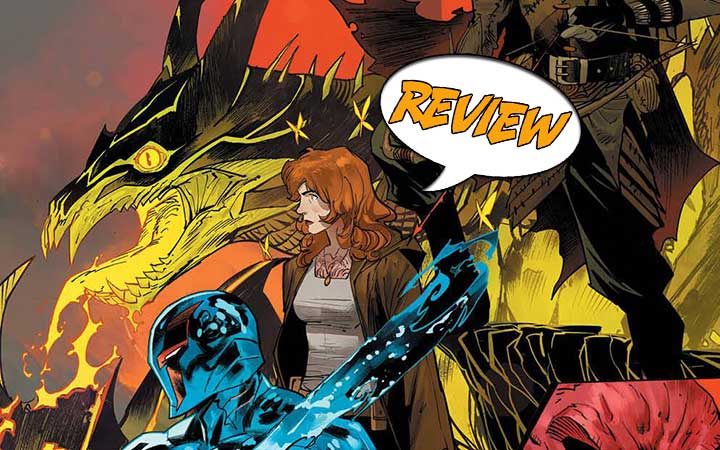 Once and Future #28 Review

Christmas Day is but a one-day truce. Bridgette’s plan has a lot of pieces and a lot of parts to play. Can everyone keep to the script, or will there be unanticipated complications? Find out in Once and Future #28 from BOOM! Studios.

Previously in Once and Future: Galahad resists accepting that Elaine is his mother, but stubbornly keeps attempting to get the Grail. Christmas Eve arrives, and magpies announce to all that whoever draws the sword is the true King of England. The Arthurs prepare to make a move toward London. Bridgette and Duncan are near the sword. After a burst of gunfire, Hempleworth appears! He and James have been organizing a resistance. Bridgette enlists them to help guard the sword as the Arthurs descend. Galahad makes another run for the Grail, but he only succeeds when Lancelot acknowledges that he is his father. The battle is fierce, but Bridgette has another plan. She arranges with Hempleworth to have all the church bells rung at midnight. That signifies the start of Christmas day, a holy day, and the Arthurs cease the battle.

ONE LAST CHANCE FOR ALL

Once and Future #28 opens with Elaine shifting into her Nimue persona and calling her sisters of the Lake. She desires a gift from them this Christmas morn. In the next scene, she rides toward Arthur’s castle. Merlin warns him that she is a traitor. But she has come with the gift she requested from her sisters – Excalibur! Arthur calls on his troops to feast today before their victory tomorrow.

Merlin and Nimue do not join the feasting. Merlin is leery of her; she recognizes that he does not fit in with this Arthur, and that he recognizes that she is both Nimue and not Nimue. She wants to know his story. He was a bard whose Lord died on the field of Badon. He went to the Wild Stories and found one and made a part in it for his Lord – an eternal King who would have a seer at his side, also forever. He no longer remembers the name of the man he wanted to keep alive. The story keeps repeating. More and more, they have become Arthur and Merlin.

After their feast, Arthur and his knights pass out. Nimue is tempted to kill him with Excalibur but sticks to the plan instead. She returns to Bridgette and tells her everything. The bells ring. Christmas is over and it is now Boxing Day. They must go to the place where King Lear was first performed. Things have changed since then; that location is now in Parliament. As the Arthurs return to fighting, the Merry Men, with help from Duncan, undo the magic and set Leir free. He is determined to grab the sword and be King, but as a water god, he cannot hold it. If he cannot have it, he announces, no one will. The storms arrive.

Bridgette and Duncan travel to Bath leaving Rose behind to keep an eye on Nimue. When they arrive, the rain has let up. They traveled by way of the woods, and traveling as Merry Men, time plays fast and loose. Almost a week has passed by, and it is New Year’s Eve.

In London, the rain continues. Hempleworth, Nimue, and Rose keep watch. And then the Green Knight arrives!

Once and Future #28 covers a lot of ground, and the art is there to help keep us oriented with some truly glorious scenes. Right from the beginning when we see Mary/Elaine/Nimue at the shore of the lake, we are informed about what she is doing by seeing her reflection across three panels as she composes herself. She tries to keep calm, but the water ripples, and her reflection ripples with it. She is a dangerous and interesting character. We know that she cannot always be trusted, but when she talks with Merlin, we see a moment where she really wants to hear this Merlin’s story, and we also see that she truly understands the consequences of getting so trapped in a story that you lose yourself.

The scene in Parliament is short but dramatic. We do not need to see the entire play performed, but it is lovely to see it being done in that setting with rain streaming down through the ruined roof. Water is important in this issue, and ripples in the puddles warn of Leir’s arrival, which is bombastic, magical, and colorful.

BOTTOM LINE: EVERY MOMENT IS A JEWEL

We are at the point in Once and Future #28 where the complicated setup is starting to pay off. Some parts of the plan may be working, but there have been so many surprises that we cannot relax and predict where it will go next. The concept is delightful, and I also enjoyed learning about the folly of becoming caught by the eternal stories.

Will a one-day truce buy enough time for Bridgette’s plan to take effect?